Merrittonian to participate in his 42nd Terry Fox Run 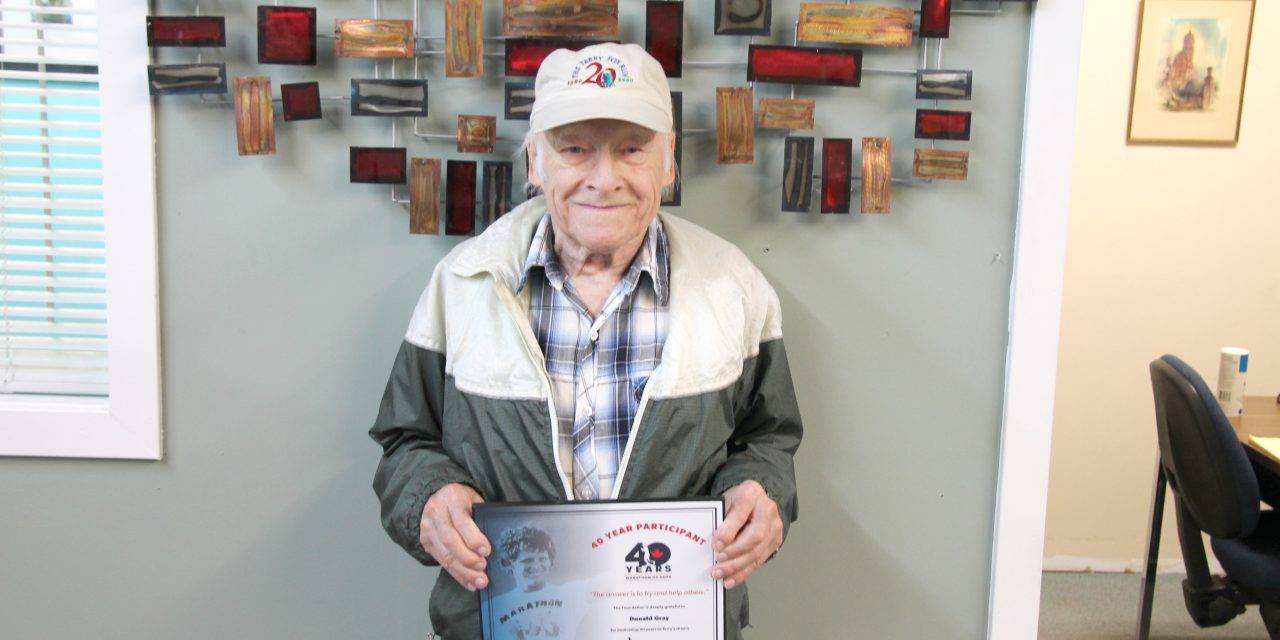 A long time Merritt resident will participate this year in his 42nd annual Terry Fox Run, a notable achievement that was inspired by the man himself. Terry Fox, a 22 year old man from Winnipeg, embarked on a nationwide charity marathon after losing his leg to osteogenic sarcoma. For 88 year old Merritt resident Donald Gray, this act of selflessness and bravery has been a lifelong source of motivation.

Gray was born in Lloydminster, Sask in 1934. He spent most of his life working as an electrician, and has always believed in the importance of physical activity and giving back to his community. Gray first moved to the Nicola Valley in 1974, bringing his family from Edmonton for employment. He sat down with the Herald ahead of his 42nd run to discuss his dedication to the annual Terry Fox run event.

“I didn’t do much running until we moved from Edmonton to Merritt, which is when I looked at all these hills and said ‘I need to do some exploring,’” said Gray with a laugh.

“I was so impressed to see that man with only one leg, and how much he suffered from it. To kind of ignore himself and try to help all these kids he met in the hospital, that was the thing that really twigged me.”

Terry Fox began his nationwide Marathon of Hope in 1980, running close to 42 kilometres daily through Newfoundland and Labrador, Prince Edward Island, Nova Scotia, New Brunswick, Quebec, and Ontario. Fox stopped in more than 400 municipalities to share his message and raise awareness of cancer. After raising $1.7 million for research, Fox was forced to stop his marathon outside of Thunder Bay, ON, after cancer was discovered in his lungs. He died in B.C. just nine months later.

Gray watched the news of Fox’s initiative closely, lauding him for his selflessness and perseverance during the rain, wind, snow, and the pain caused by running in his prosthetic leg. Gray began to run in Merritt around the same time Fox rose to prominence, and has never looked back since. He has participated in 41 annual Terry Fox runs, from coast to coast, even being awarded a plaque from the Terry Fox Foundation for his 40th run in 2020.

“I was just starting to do a little bit of running, and his Marathon of Hope inspired me to run more and more. The first Terry Fox run I did was in Merritt, and the farthest one away I ever did was in New Brunswick. We were down there on holiday, and we had to scramble to find a Terry Fox run, but we found one,” said Gray.

“I read quite a bit about the pain he was in. They had never made a leg that was built to run that far. The stump was always breaking open, but he just kept on going. The whole family pitched in.”

Gray’s son, who looks back fondly on memories of his father’s involvement in the Terry Fox run, remembers the race as a family affair. He was full of pride as he described his father’s regimented training process, along with his lifelong determination to support the annual initiative. The younger Gray remembers cheering along his father and other participants from the back of the family vehicle, referring to it as a “personal cheer squad” with a laugh.

This year’s Terry Fox Run, organized by the Rotary Club of Merritt, will be held at Rotary Park on Sunday, September 18. Gray is unsure what his level of involvement will be as he recovers from a medical condition, but he will no doubt be involved in his beloved annual run. Gray believes the lessons that Terry Fox left behind are valuable for anyone and everyone.

“It’s been so successful, and it proves what one man can do. He puts his heart to it and never gives up, it’s a message of courage and perseverance. It’s a good lesson for anybody. My daughter was teaching in Alberta, and she dug into making a hero of him to her grade 5 students. Pretty soon, everybody was a Terry Fox fan, and it spread across to the families and other schools,” Gray said.

For more information on the Terry Fox Foundation, visit www.terryfox.org.