A busy season for veteran firefighter 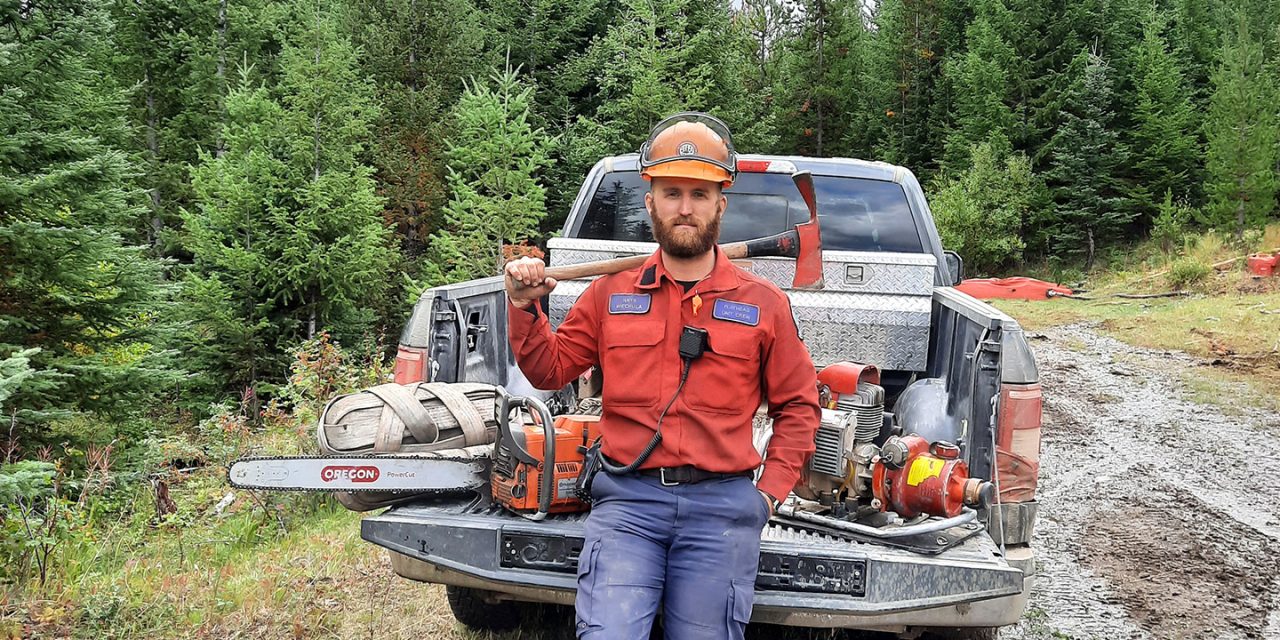 Rhys Wiechula is the Unit Crew Supervisor for the BC Wildfire Service (BCWS) Flathead Unit Crew, which is based out of Cranbrook and has been deployed to the Interior to help battle some of the most intense fires BC has ever seen.

Most recently, the crew has been assigned to the Tremont Creek Fire, a massive wildfire that prompted the evacuation of Logan Lake in August, the peak of a season that began in April.

“In April we had some fires in Radium and Fairmont out in the east Kootenays,” said Wiechula of his crew’s season.

This routine is not new for Wiechula, who has been a wildland firefighter for eleven years.

“I started out working in the bush as a tree planter in 2007, and I did that for three years and then I was looking for something new,” explained Wiechula.

“My brother pointed me towards Type 2 firefighting, so I did that in 2010. I really enjoyed my time, I did two deployments up in the Cariboo and then I really wanted to take a step up and be a Type 1 firefighter, so I applied in 2011 and I got on in Cranbrook… it’s rewarding work and that’s what got me into it at first, just being outside, being active and doing something rewarding.”

Wiechula was on the Rocky Mountain Unit Crew for nine years before becoming the unit crew supervisor for the Flathead unit crew last year.

Wildfires are ever changing, and as such, firefighters must be prepared to change their plans and methods on a moment’s notice. However, Wiechula detailed a typical day for crews on the front line, a day that begins with a 5:00 a.m. wake up call, followed by a 6:00 a.m. breakfast before crews pile into vehicles and travel an hour or more to the fire line.

“You’ll do your safety briefing and operational briefing in the morning, and then you’ll dig into your task,” said Wiechula.

“On some of these bigger fires we’ll be preparing equipment lines for indirect attack such as doing planned ignitions, or if it’s safe to do so, we’ll be putting in direct lines. So, cutting in hose trails, setting up water delivery, those kinds of objectives. The average day will be at least 12 hours, and up to 15 or 16 hours, especially in a busy season like this,” Wiechula continued.

“Then, we’ll debrief as a crew at the end of the day, go over any safety issues, head back to camp for dinner and showers and getting some sleep. That’s probably the most average day we would have.”

Those long days eventually begin to wear the crews down, particularly when the season lasts for months with no help from Mother Nature by way of cooler temperatures or precipitation.

“Some lows would be the lack of sleep, that definitely adds up over the season,” said Wiechula.

“By this time in the season most people are feeling some cumulative fatigue. Being away from home is a low, that one’s a little double sided because a plus is being able to travel around the province, and around the country, or internationally sometimes, that can be very rewarding and a big plus. But being away from home does wear on you.”

Wiechula was sent to Washington in 2013 to assist fire crews in that state and was also on a crew dispatched to California last fall. During extreme fire seasons, American and Canadian crews will often partner in their firefighting efforts, sharing the resources of highly skilled firefighters through mutual aid agreements.

This year, BC received assistance from Mexican and Australian crews as well as BCWS was quickly overextended and facing more fire activity than they had the manpower to attend to.

“I would say it’s definitely one of the busiest, and some of the most sustained extreme fire behaviour I’ve been witness to, very similar to 2017… especially in July,” said Wiechula.

“Large fires burning out of control. I’d say this is one of the top seasons in terms of extreme fire behaviour, and it really changes the way we engage with the fire.”

That said, crews like the Flathead Unit Crew gave their all in the face of daunting and sometimes extremely dangerous blazes, working to protect lives and infrastructure.

“I feel like the work that we do is very meaningful, especially in a season like this where you can see the direct impact of our successful work, you can measure it in terms of lifting Evacuation Orders to Alerts and lifting Alerts,” said Wiechula.

“Helping people get back into their homes, protecting people’s homes and infrastructures, in BC and around the country, it’s rewarding work.”

The Flathead Unit Crew’s last day on the fire line was Sept. 1, capping off their 2021 season.

“I’m really proud to be part of the organization, and proud of all the crews in BC Wildfire and the hard work they’ve put in and the sacrifices they make to put in the effort they did for a season like this,” Wiechula concluded.