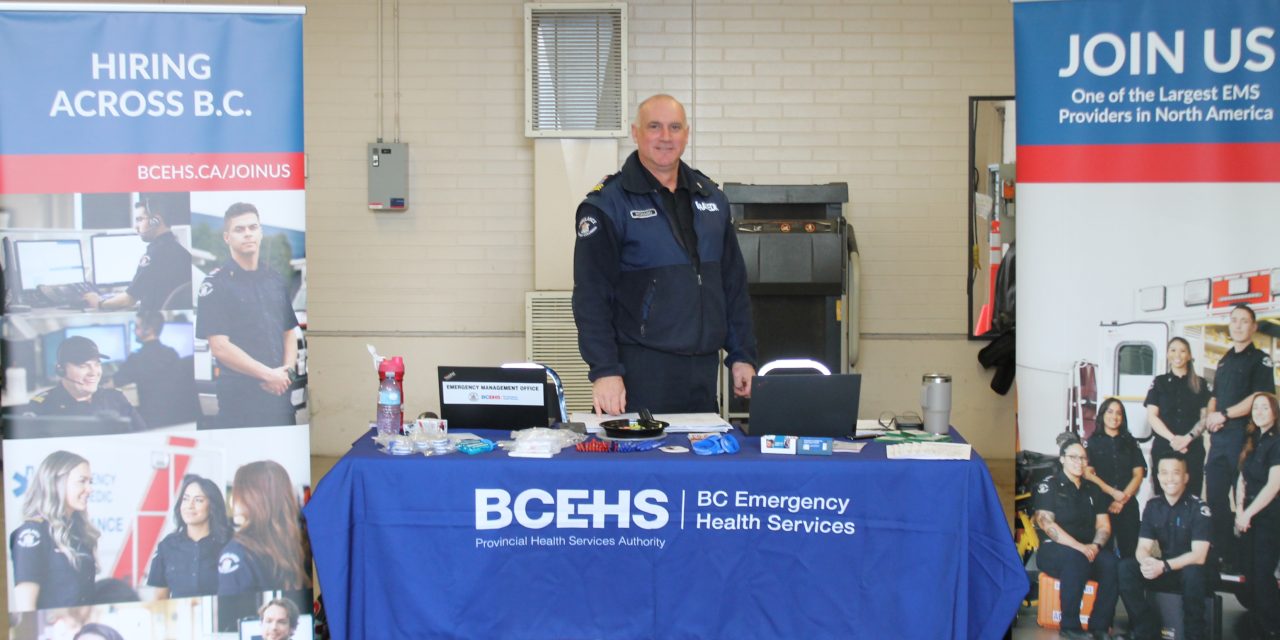 Merritt Ambulance Unit Chief Richard Striemer shares that it is ideal for them to get more members as it gives them flexibility with members who’d potentially miss their shift. Izaiah Reyes/Herald

Staffing shortages continue to plague the B.C. healthcare system. The lack of nurses and doctors continue to hinder emergency room operations in many areas in the province, including the Nicola Valley. In addition to ER operations, staffing shortages with the B.C. Emergency Health Services are also in need of more members. More paramedics are needed which is why BCEHS has been on the road conducting open houses in rural and remote areas to recruit locals for their respective ambulance stations.

On Thursday, January 12, BCEHS hosted an open house at the Merritt Ambulance Station. Local residents were invited to drop in for a tour at the station, see the ambulances, get a blood pressure reading, and learn more about the BCEHS career pathway.

“We are looking for skilled staff members in all of our stations,” said BCEHS Indigenous Talents and Acquisition Coordinator Rhiannon Stelmack.

“The goal in getting out to these remote and rural stations is to find locals that want to help, are tied to the community, and want to have a career with BCEHS.”

Stelmack has been on the road, helping facilitate open houses throughout the different areas in the province. A day prior to the Merritt visit, BCEHS conducted and open house in Ashcroft and they will conduct another one in Logan Lake on January 24.

“We’re looking and recruiting actively throughout the entirety of B.C.,” Stelmack noted. “Things have been improving within the last year but we are not nearly where we need to be.”

Currently there are eight full time members out of the 18 people in the Merritt ambulance crew. Station Chief Richard Striemer hopes to raise this number up.

“If anything happens to one of our members right now, we can’t backfill those shifts,” he said. “We’re so short that car (ambulance) would go unfilled. All our part timers are working a lot that they are unable to pick up anymore which creates the need for more staff.”

Two people are required for an ambulance to respond to an emergency. If they are short on staff and unable to respond, Striemer explained that BCEHS would have to send in a unit from Kamloops, which is roughly an hour, depending on road conditions.

“We face this issue all the time, and Kamloops is in worst shape than we are,” said Striemer. “They don’t have enough people either. It’s quite common for them to only have two cars during the night to cover all of Kamloops.”

Roughly 4500 calls each year are received by the Merritt Ambulance Station, with varying consistency of calls.

In discussing the process of recruitment, Stelmack shared the following requirements that interested parties must meet:

“We’ve been doing virtual and in-house presentations about the BCEHS career pathway to show people how to get in and what the opportunities for advancement are,” Stelmack added.

“You can come in as an entry level staff and work your way up to critical care paramedic if that’s what you want to do branch out into our many different departments.”

The search for more people in Merritt, and B.C. overall, continues. Striemer views this first open house as a good start to their recruitment efforts.

“I think the event was successful but we would like to get more people out in the future,” said Unit Chief Richard Streimer

“We had a local resident asking a lot of questions and took some information. We were able to refer him to the hiring process.”

“We’re planning to also visit the local high school and get interest from there,” Striemer said. “We’ll try to advertise the events earlier through media so more people know about it ahead of time.”