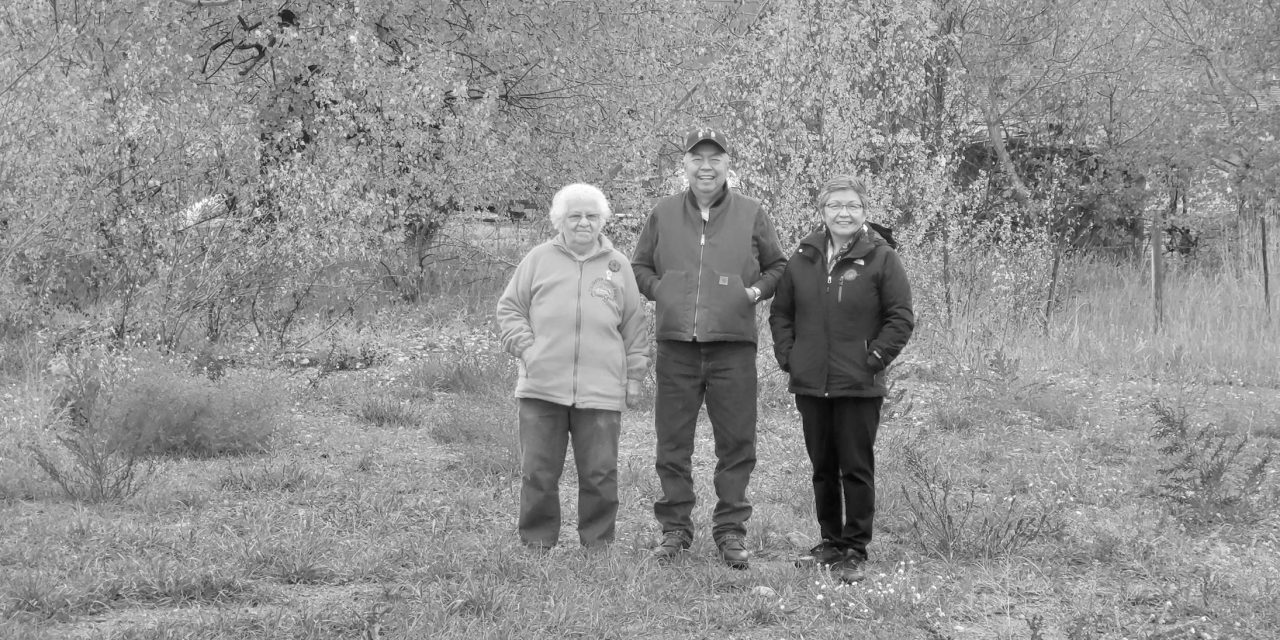 The Nicola Valley First Nations Veterans Association (NVFNVA) is working towards the construction of a new cenotaph in Shulus that would honour the many Indigenous veterans of the Nicola Valley.

The project is a continuation of the work undertaken by Carol Holmes of Upper Nicola Band to have proper military markers placed on the graves of Indigenous veterans. Holmes began this work in 2018/19 and has now placed around 15 markers, with at least one on each local reserve.

“In speaking to community members, family and leadership they all were saying that what we need is a cenotaph for our FN veterans,” said Holmes.

“My contact with Veterans Affairs Canada let me know that there was a funding opportunity coming up regarding memorial monuments, and so I was excited about it.”

Members of the NVFNVA, including Holmes, Richard Jackson, Jr. of Lower Nicola Indian Band (LNIB), Heather Shuter Trosky of LNIB, Percy Joe of Shackan, June McLeod of Coldwater and LNIB Communication Coordinator, Ruth Tolerton, began planning for the new monument, despite their proposal being delayed due to COVID, wildfires and evacuations.

The top priority when compiling information and ideas for the new cenotaph was to first find a place to erect it.

“In the beginning when we first started our discussions about the monument specifically, we had also explored other places in Merritt,” explained Holmes.

“We have the Nicola Valley Indian Services Association building, the five bands have property behind Extra Foods, there was also a suggestion for NVIT, and there’s a building behind Tracker Sportswear. But when we looked at it, and we did a list of pros and cons and what we need, some of the bigger things we looked at when deciding where we were going to place the monument were location, services provided, safety, access for others, washroom facilities, and parking.”

The current monument, a collection of boulders that were placed near the LNIB firehall, has been in place for 18 years. However, this location has become more difficult to utilize as the community grows and Hwy. 8 becomes busier.

“It has served its purpose, it’s been wonderful to have it there,” said Holmes.

“We’ve had 18 years of celebrations and each year it grew, so parking started to become an issue and safety, because we were slowing down traffic on the main road and not wanting to see an injury.”

However, after discussing all potential locations, the NVFNVA decided that the ideal location was still Lower Nicola. The Association approached LNIB and suggested a location near the Anglican Church Scw’exmx Parish Hall on LNIB lands as “an ideal spot”.

LNIB agreed to the location and to provide up to an acre for the envisioned memorial wall.

“I think LNIB took the initiative to have it here, and it’s been here for the last 18 years,” said Jackson.

“So, we became the focal point of these ceremonies. And I think it’s really important that we have it on the reserve, because we’re First Nations it makes sense to have it here.”

Holmes stressed the importance of collaboration, which will not only increase the chances of the funding being granted, but also guarantees that everyone will be properly represented and that individuals from each band will be willing to pitch in and lend a hand on the project.

A presentation was made to each of the five bands, as well as Conayt Friendship Centre, and all were happy with the idea.

“The leadership was totally on board, totally engaged and very supportive of what we’re doing,” said Holmes.

“There was nobody that said no, and they all supported this site. It was rewarding to know that the bands and Conayt centre all pulled together because this is an exciting project and opportunity for us.”

According to the official synopsis by the NVFNVA, “The vision is to have three granite slabs engraved with the names of all of the Nicola Valley First Nations Veterans. The area would also include five benches representing the five Nicola Valley Bands, and a fire pit area. The existing rock monument would also be relocated to this area.”

Holmes also hopes to gather and record the stories of those veterans whose names will be inscribed on the monument, with the ability to expand the memorial in future if necessary. The work will be completed in phases and may also include a gazebo or similar structure.

“To me, it would be an identity for honouring the veterans and having the five bands represented,” said Jackson.

“It’s very important to have that identity of First Nations veterans, a place where everybody can come at their own time and sit and honour and pay respects. Your prayers, your songs, you don’t have to wait until Nov. 11.”

Holmes also noted that Indigenous history is typically recorded and shared orally, and as veterans age and pass, their stories can be lost. Particularly the stories of those who served in WWI and WWII, during which time Indigenous people faced many hardships and heavy-handed racism at home.

“Those are the first wars that our First Nations veterans participated in and many of them were volunteers,” said Holmes.

During that period of time there was a lot of discrimination and colonialism, and people, including our own people, aren’t really aware of our history of that particular time. So, what we also want to do is make sure not only we as First Nations know, but that the general population knows about our contributions to Canada… whether volunteering or enlisting in the war, or other peacetime efforts. This is our country, and that part of our history is important.”

The Association also believes it’s an important part of Truth and Reconciliation to recognize the services of Indigenous veterans, who at that time were disenfranchised. The country that they served on the battlefields overseas, sometimes paying the ultimate sacrifice, did not at that time, recognize them as true Canadian citizens.

In addition to being denied the right to vote, Indigenous people were not permitted to enter drinking establishments, or even to leave their reserves without written permission from an Indian Agent. In order to enlist in the military, First Nations individuals were first required to surrender their ‘Indian Status’.

“The soldiers’ pay and benefits went to the families, but you had Indian Agents who said, ‘no no these women don’t know how to manage their own funds and their families, so we’ll just dole it out to them as we see fit’, and a lot of the funds never even made it to them,” said Tolerton.

“To me, the sacrifice of all these soldiers, not just First Nations but soldiers in general, was horrendous. But then to add that layer on top of it? It just blows my mind, and I think it’s high time that story was publicized.”

The Association hopes to know if their application for funding was successful by the end of Dec. and have set a tentative start date for the project as Apr. 1, 2022 aiming for completion by end of Oct. 2022.

The funding, however, will not cover all costs.

“Donations are a priority,” said Jackson.

These donations could be monetary, in-kind, or volunteer hours. An architect, stonemason, and structural engineer will be needed.

Donations can be made to the NVFNVA, in care of the host, LNIB.

“Another big part of the project is gratitude,” concluded Holmes.