Cents blow chance to move up in the standings 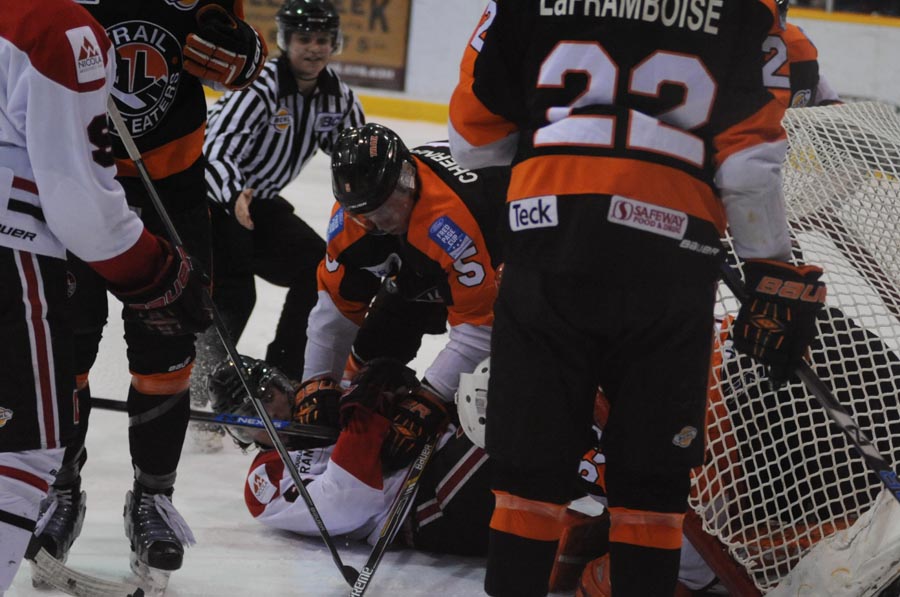 The Merritt Centennials wound up on the bottom in both their games this past week - losing 5-3 to the Trail Smoke Eaters (above) on Jan. 25, and then 3-1 against the Prince George Spruce Kings on Friday. (Ian Webster/Herald).

The Merritt Centennials shot themselves in the foot this past week, and as a result have fallen back into fourth place in the BCHL’s Interior division.

Tied for third in the division with the Trail Smoke Eaters going into Wednesday’s home contest against the Smokies, the Centennials had a golden opportunity to put their Kootenay rivals solidly in their rearview mirror. Instead, they laid an egg – playing arguably their worst game of the season in a 5-3 loss.

The final score actually flattered the Cents, who gave up five unanswered goals in just over 20 minutes of hockey before mounting a modest comeback in the third period.

Despite being outshot 16-10 in the opening stanza, it was Merritt’s Stephan Seeger who opened the scoring at 15:30 of the period, with help from linemates Cade Gleekel and Zach Risteau. 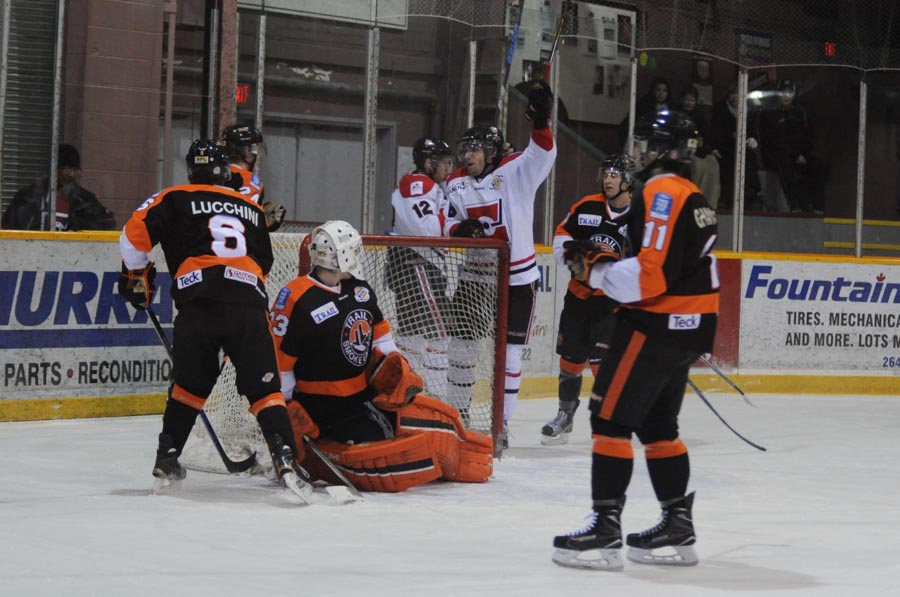 One of the few highlights of Merritt’s game against Trail was the first-period goal by the Centennials’ Stephan Seeger (12). Cade Gleekel (upraised arm) drew one assist, and Zach Risteau the other. (Ian Webster/Herald).

It was pretty much all downhill from there on. First, Trail’s Andre Ghantous squared things at 1-1 a little more than two minutes after Seeger’s tally. Then the Smokies broke the game wide open with four more goals on just 11 shots in a span of 14 minutes of the second.

The Smoke Eater’s fourth goal chased Jake Berger from the Merritt net. His replacement, Colten Lancaster, allowed one early, before settling in and stopping 20 of 21 shots. 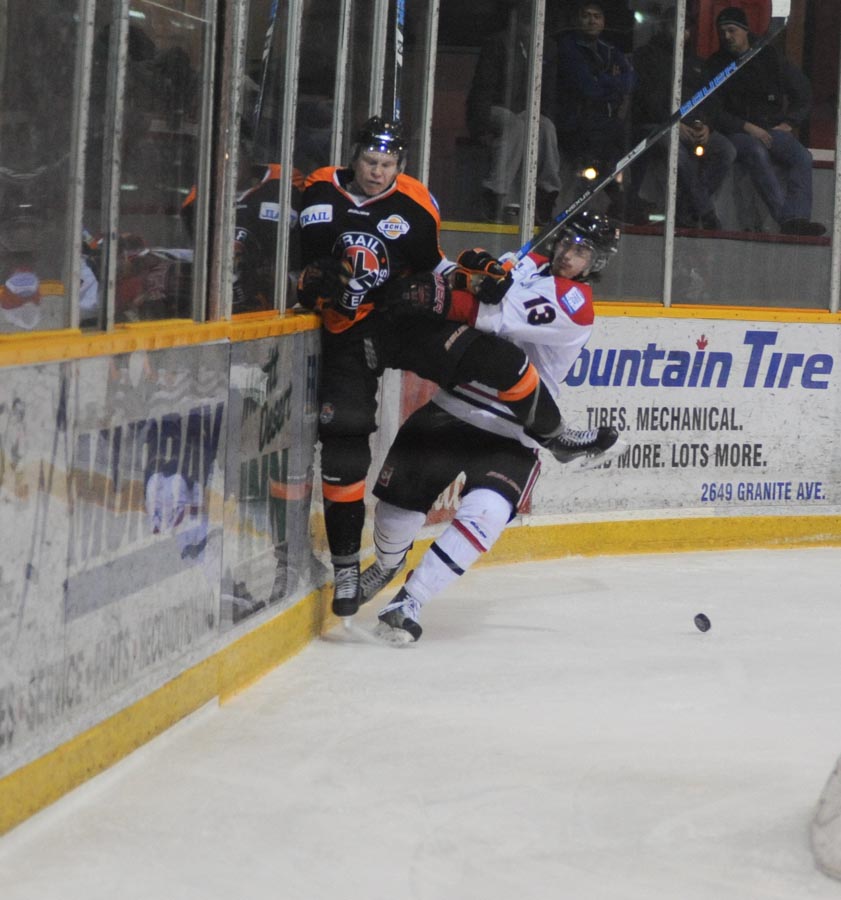 One thing consistent in both Merritt games last week was the hard-hitting play of Merritt’s Henry Cleghorn (13), shown crunching a Trail player into the boards. (Ian Webster/Herald).

Play in front of the pair of Merritt goaltenders was horrific through 40 minutes, as the Cents committed countless mistakes in their defensive zone, and looked lethargic and disorganized through the neutral zone and in the Trail end.

Merritt’s play improved somewhat in the third period, and the team was rewarded with a pair of goals by Nick Fidanza (from Henry Cleghorn and Risteau) and Cleghorn (from Fidanza and Rylan Van Unen). 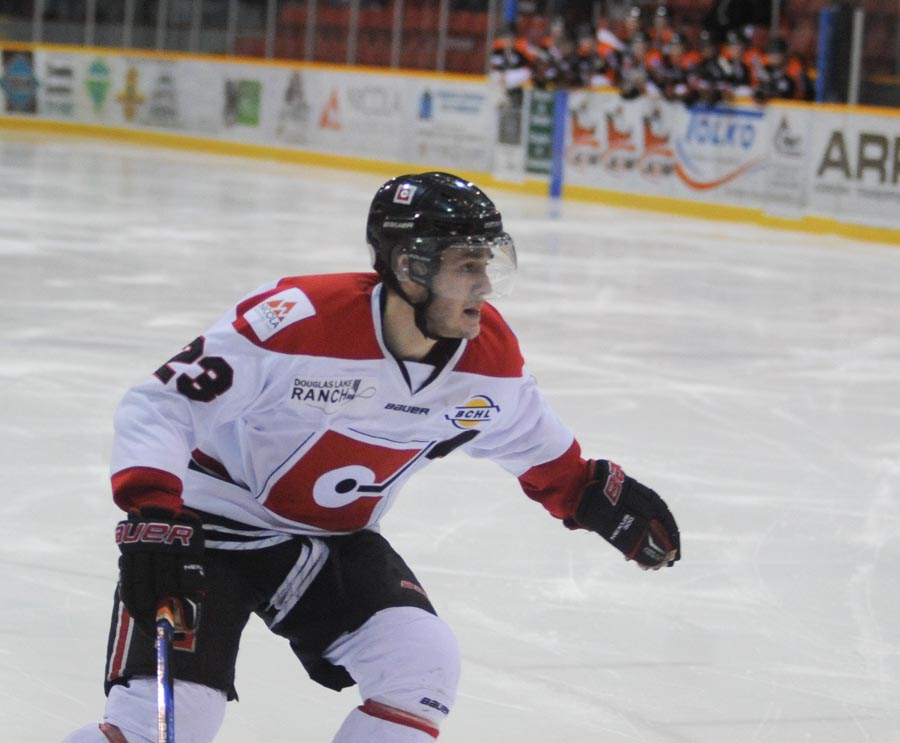 The fact that forwards Tyler Ward and Michael Regush were missing from the Centennials’ lineup (due to the CJHL Prospects Game back East) was no excuse at all. The Smokies were without three of their top five scorers and their most trusted blueliner.

In his regular post-game interview with Q101 radio’s Mantar Bhandal, Merritt head coach and GM got it right in calling Wednesday night’s loss an embarrassment. He also stated that the benching of Risteau (despite two points in the game) and defenceman Michael Faulkner in the third period was definitely a message to the whole team about effort, and playing a responsible 200-foot game.

A gut-busting Thursday practice, and the return of Ward and Regush, resulted in an improved level of play on Friday; however, the Cents still managed to find a way to lose – falling 3-1 to the visiting Prince George Spruce Kings. This time, it was the lack of scoring on Merritt’s part that doomed them to defeat. Despite firing 37 shots on Sprucies’ netminder Tavin Grant, only Fidanza (from Cleghorn and Faulkner) could find the back of the net.

At the other end, Lancaster was almost as good, stopping 33 of 35 shots. The last PG goal was into an empty net. 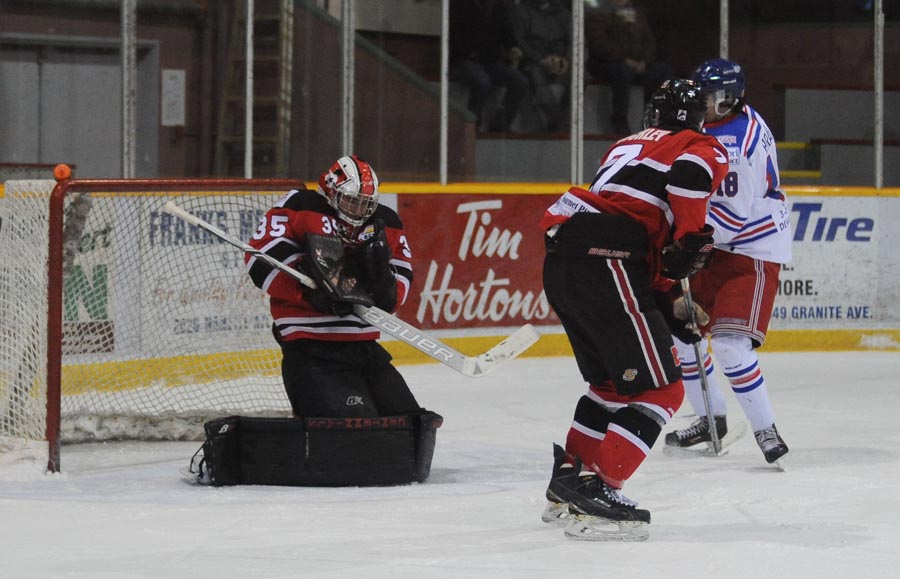 Merritt netminder Colten Lancaster played well in both of last week’s games, but was unable to pick up the win on Friday against Prince George as his team managed just one goal in a 3-1 loss. (Ian Webster/Herald).

Merritt continued to struggle at times on Friday exiting its own end. The fast breakout was almost non-existant; there were virtually no Cents’ odd-man rushes. Even when the Centennials regrouped behind their own blueline, they couldn’t seem to find a seam to move the puck ahead.

At the other end of the ice, the Cents’ once-vaunted powerplay also continued to flounder. There was precious little zone time, let alone many grade-A scoring chances. Post-game, Martin stated that other man-advantage strategies have been worked on in practice, but that his players appear reluctant to break old habits.

The Cents have an opportunity to get back on track this coming Wednesday, when they host the Penticton Vees – another team that is currently struggling (I can’t believe I said that). The Vees are just 3-6-1-0 in their last 10 games. They lost to both Vernon and Trail this past weekend. Merritt won the last meeting between the two teams, 3-2 back on January 13.

In other Cents’ news, Tyler Ward’s and Michael Regush’s Team West defeated Team East 4-3 at the CJHL Prospects Game on January 25 at the Ed Lumley Arena in Cornwall, Ont., in front of over 150 NHL, NCAA, CIS and CHL scouts. Trail’s Kale Howarth had two goals, including the game winner, for the victorious West squad. Regush was credited with a pair of assists. The winning netminder was Vernon’s Ty Taylor. Team West outshot Team East 46-22. 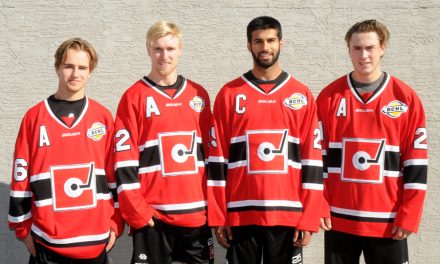 Cents look to their letters for leadership and experience 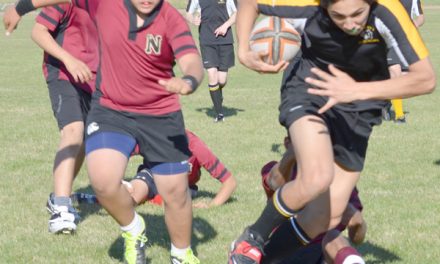 End of the line for boys rugby seasons 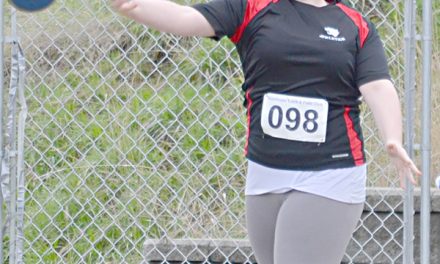 MSS six strut stuff at Battle of the Border 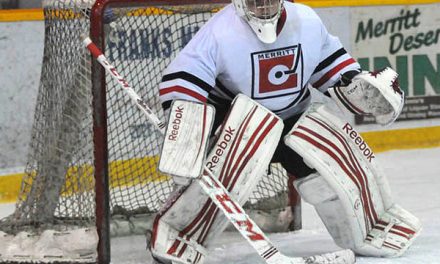