Cents’ busy weekend against the Spruce Kings and Vipers 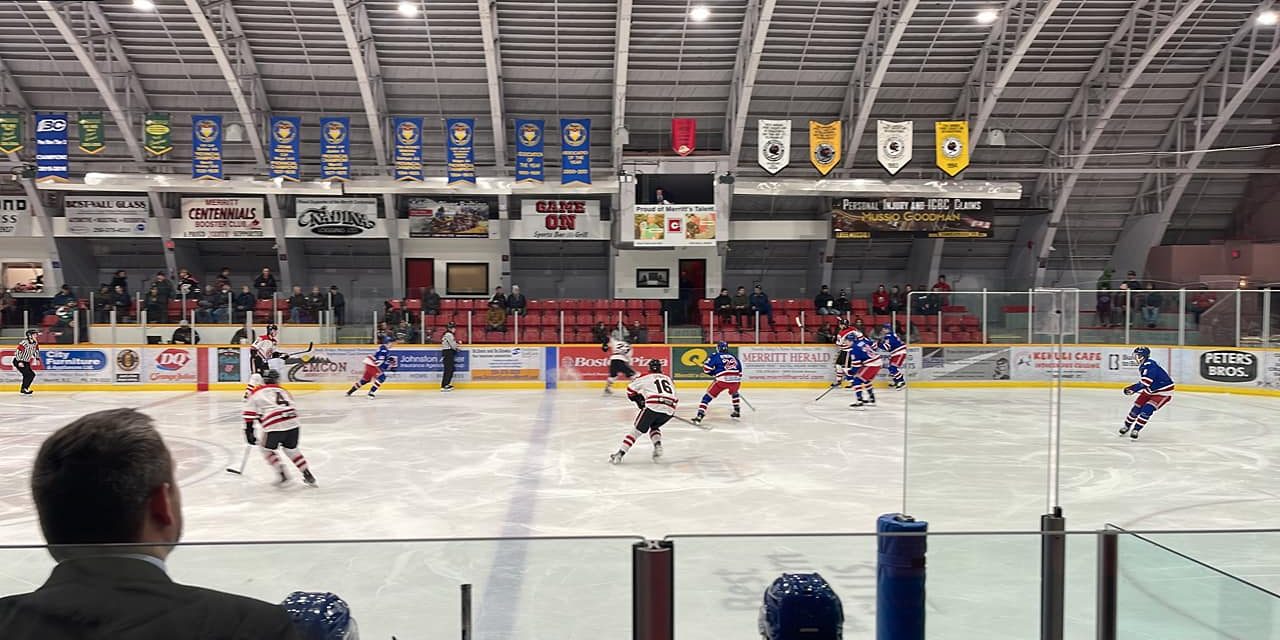 The Merritt Centennials take on the visiting Prince George Spruce Kings in their first game of the week. Marius Auer/Herald

The Merritt Centennials had a mildly successful weekend of regular season hockey this week, capturing a total of 3 points of a possible 6 across three games. The Cents took on the Prince George Spruce Kings for two nights in a row on home ice, before hitting the road and taking on the Vernon Vipers at Kal Tire Place.

The Cents beat out the Spruce Kings on their first night of action, winning 3-2 in a hard fought victory. Merritt opened up the scoring 9 minutes into the first period, with right winger Ryan Spinale, assisted by Aleksey Chichkin and Coleman Jenkins, sneaking one past Spruce Kings goalie Jordan Fairlie. The Spruce Kings responded with a goal by John Herrington 9:42 into the second period, tying the game up. Minutes later, on a power play caused by a Spruce Kings boarding penalty, the Cents scored two goals within seconds of each other to take the lead. With 58 seconds left in the game, John Herrington scored a Spruce Kings goal to make the game 3-2, but the final buzzer sounded with the Cents in the lead. The Cents were 0-7 against the Spruce Kings last season.

In the second night of hometown hockey at the NVMA, the Cents lost 7-5 to the Spruce Kings. The Cents played a strong game, but ultimately lost control in the third period. The Cents opened up scoring once again, with Left Defenseman Erik Sollied assisted by Mark Thurston scoring a goal just 22 seconds into the game. The Spruce Kings responded five minutes later with a goal by Luke Eurig. At the 7:56 mark, Walker Erickson put the Cents briefly back in the lead, before a game-tying goal by Jake Schneider of the Spruce Kings before the period’s end. The second period was just as back and forth, with Walker Erickson opening up scoring before the Spruce Kings answered back with two of their own. After an interference penalty against Prince George, the Cents’ Jaxson Murray, assisted by Tristan Allen and Jackson Krill, tied the game up 4-4 during a power play. Kai Greaves for the Spruce Kings opened up the third period at the 3:59 mark, before the 6:32 goal by Coleman Jenkins to tie the game once again. At the 13:54 mark, the Spruce Kings scored a goal to gain the lead, before Kilian McGregor-Bennett cemented their lead with another goal with 52 seconds left in the game.

The Cents hit the road on Saturday, November 12 to take on the Vernon Vipers at Kal Tire Place. The Centennials played another strong game, taking home a point in an overtime loss to the Vipers. The first period was scoreless, while the second period saw a goal by Jaxson Murray of the Cents, who was assisted by Jackson Krill at the 13:54 mark. Four minutes into the third period, Thomas Tien tied the game up for the Vernon Vipers, sending the teams to overtime. After a hooking penalty against the Centennials’ Left Wing Damon Jugnauth, the Vipers scored a power play goal to win the game 2-1.

The Centennials take on the Cranbrook Bucks at Western Financial Place on Friday, November 18, before heading to Trail on Saturday to play the Smoke Eaters. For more information, visit www.merrittcentennials.com.