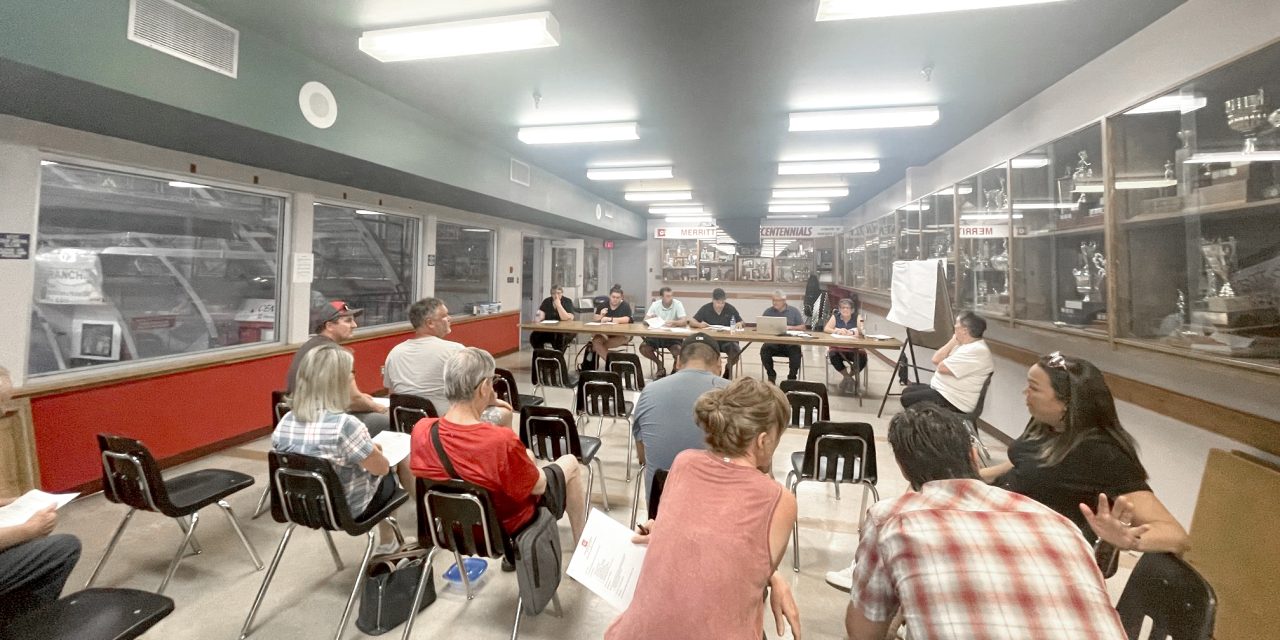 The Merritt Centennials recently held their Annual General Meeting, setting the pace and leadership for a year they hope will be the best in franchise history. The community owned team’s executive, along with a number of community members, gathered at the Nicola Valley Memorial Arena on July 11 to discuss finances, the past season, and elect a new executive.

Heading into their 50th season, the Cents are looking to recover from a 3 win 47 loss record on the ice last year. Having made a change to their coaching staff late in the last season, Head Coach and General Manager Curtis Toneff will lead the team into the 2022/23 BCHL season. While their first game isn’t until September 7 against the Chilliwack Chiefs, there is plenty to do in the meantime.

“Oddly enough there really is no in-between season in a sense. You finish one season and start working on the next. I think a lot of people don’t understand that we never really rest, there’s always something we’re working on,” said Kelly Bartch, the newly re-elected president of the Merritt Centennials.

Team planning, strategy meetings, practices, and community engagement keep the Cents busy, from coaching staff to volunteers. Their recent Centennials Golf Tournament was a great success, raising additional funds to support the operations of the club after years of pandemic induced downturn. The Cents maintain a marketing office downtown year round, in an effort to engage with the community and handle communications for the team.

The Cents executive committee and board of directors has been set for the year, with Bartch adding that he believes the mix of newcomers and small town hockey vets are on the same page, and bring a fresh perspective to the team. This year’s executive is as follows:

“We were very appreciative of and sad to see some of the people serving step aside, and some maybe take a hiatus. We’ve got some new people stepping in and we’re moving forward with it. We’re looking forward to it, everyone’s excited.”

With this year’s coaching and hockey operations staff in place and ready to move forward, the Cents staff and players are looking forward to their main camp in August, where they will finalize their roster and hit the ice for the first time this upcoming season. Coach Toneff and staff hope to lead the team to a big success for their 50th season.

“I think it’s going to be an exciting year. The first full season that our head coach, Curtis Toneff, will take the lead. There’s a whole raft of new and exciting players, and we just really want the community to really embrace our 50th season.”

While the Merritt Centennials Booster Club had previously supported the club’s volunteer base, fundraising efforts, and event organization, the group stopped operating with a few exceptions in the past two years. This has created a new need for the Cents – more volunteers. Bartch says a variety of volunteer positions with varying levels of time commitment are available, and offer rewarding experiences in the community.

“The biggest thing that we have been blessed over the years with is having excellent volunteers. In the last two years the Booster Club has stepped aside officially, but they’re still some that help us out every day. We do need more volunteers. As a community owned team, we rely heavily on volunteers.”

For more information on the Merritt Centennials, to buy tickets, or to get involved, visit www.merrittcentennials.com, or call 250-378-3604.