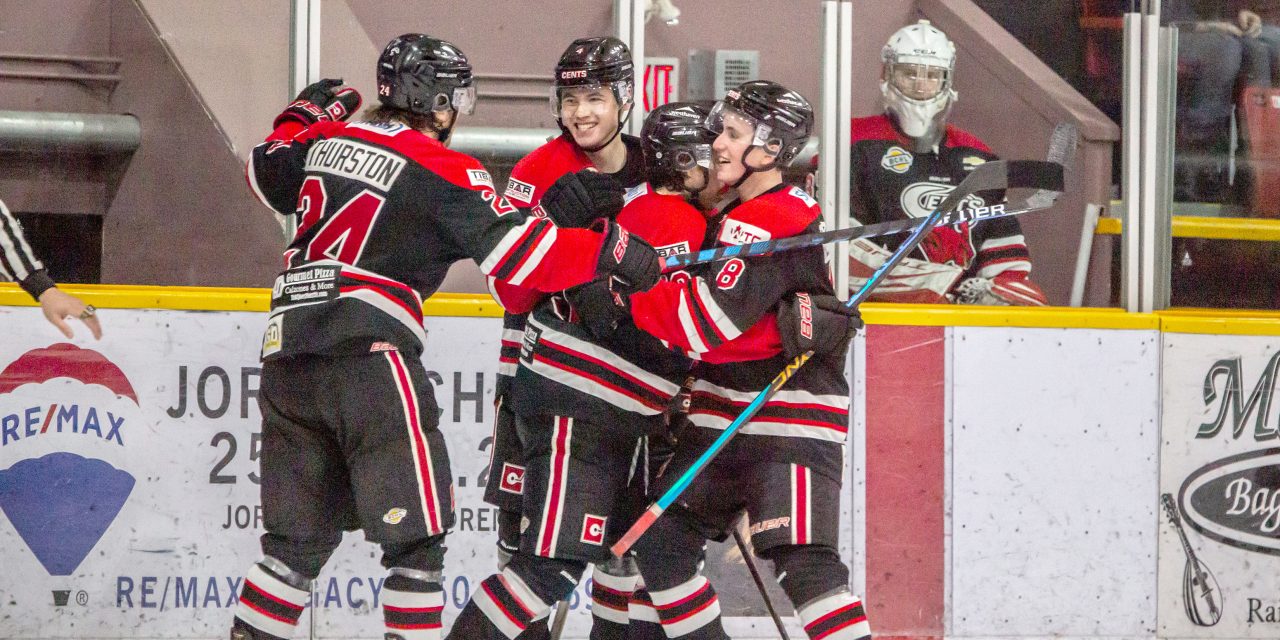 The Cents celebrate after Ryan Spinale scores what would be the team’s game winning goal against the Cranbrook Bucks on Thursday, January 5. Photo/Christina Jean

The Merritt Centennials got off to a flying start in 2023, capturing two points of a six point week, and making some major trades in the process. During the week, a change in team leadership came as captain Davide Patella was traded to the Cowichan Valley Capitals, amongst a slew of other roster moves.

It was an early start for the Cents’ week of hockey, with the team playing their first game on Thursday, January 5, on home ice. Taking on the Cranbrook Bucks two nights in a row, the first game was a promising start. The Cents would open up scoring just 60 seconds into the first period, with Jackson Murphy-Johnson sneaking one past Bucks goalie, Carter Capton. Following some back and forth, the Bucks responded with a goal of their own by Jeremy Tremblay at the 7:39 mark. The remainder of the period saw a number of penalties, but no scoring. It was a similar picture for the second period, with three penalties and 11 minutes passing before the next score. Smith, assisted by Allen and Jenkins, scored at the 11:50 mark to put the Cents in a 2-1 lead. The Bucks responded with a goal of their own just five minutes later, making it a 2-2 tied game going into the third. During a strong defensive third period, the Bucks would open scoring to make it 3-2 at the 7:52 mark. Following a tripping penalty against Cents forward Walker Erickson just minutes later, Christian Lowe would fire off a short handed goal to make it 3-3 for the Centennials. With four minutes left in the game, Ryan Spinale secured the victory by breaking the tie with a game winning goal, making it a 4-3 final score in favour of the Cents. Johnny Hicks saved 48/51 in the win.

The Cents versus Bucks rematch took place just 24 hours later, also on Centennials home ice. With Johnny Hicks starting in goal once again for the Cents, the game was on. Scoring would be opened by Cranbrook this time around, with Bucks forward Nick Peluso securing the first goal of the game less than three minutes in. The remainder of the period saw little action, with the exception of another Bucks goal by Julian Frias with just a minute left, making it 2-0. The Bucks would also dominate the second period, once again opening up scoring with an insurance goal by Bauer Morrissey at the 9:12 mark. The rest of the period was great for fans of defense, with penalties and close saves aplenty. The third period brought a glimmer of hope for the Cents following a roughing penalty against the Bucks, which gave way to a power play goal by Jaxson Murray to make the score 3-1. That glimmer of hope slowly grew darker as time got away from the Cents, and would fully be extinguished by a Bucks empty net goal with 34 seconds left in the game. Final score was 4-1 for the Bucks, with Johnny Hicks saving 39/42 in the loss.

The third game of the week was arguably the most intense, with over 28 minutes in penalties handed out, game suspensions for two players, and 9 total goals scored. The Cents headed to Kal Tire Place in Vernon to take on the Vipers. Connor Sullivan started in goal for the Centennials, seeing his first action of the week. The first period started out slow, and saw only one goal in its entirety. Following a tripping penalty against the Cents’ Connor Farren, the Vipers were able to capitalize on the power play and score the first goal of the game at the 8:43 mark. The rest of the first period saw little action besides an interference call against Vernon’s Anthony Cliche. The second period got off to a hot start, with Vipers’ forward Lee Parks scoring a goal just 1:17 into the game, making the score 2-0 for Vernon. The Centennials defence put on a good performance the rest of the period, but allowed one more goal at the 10:09 mark by Vernon’s Ethan Sundar, making it 3-0. The rest of the period would be scoreless, in the calm before the storm. The third period got off to a high octane start, with three goals scored in the first half. Thomas Tien would put Vernon into a 4-0 lead just three minutes into the third. Not long after, the Cents rallied and came back to put up two points within one minute, with both Christian Lowe and Tristan Allen scoring at the 8:38 and 9:38 mark, respectively. With the score now 4-2 within a matter of minutes, the game was back on and within reach for the Cents. The Cents’ Aleksey Chichkin received two minutes in the sin bin for tripping, which meant Isaac Tremblay of the Vipers was able to score a power play goal and solidify Vernon’s lead to 5-2. At the 18 minute mark, the Vipers would score again to make the score 6-2, making a Cents comeback nearly impossible. This wouldn’t stop Merritt from trying, though, as Diego Johnson would score at the 18:27 mark for what would eventually be the final score of 6-3 for Vernon. The game didn’t end there, though, with a fight breaking out following a high-sticking penalty against the Cents. The Cent’s Mark Thurston and the Vipers’ Anson McMaster received fighting penalties, with the Cents’ Aleksey Chichkin and Carter Schmidt receiving misconducts. Connor Sullivan saved 35/41 in the loss.

Following the weekend of games, both the Cents’ Thurston and Vernon’s McMaster were suspended for one game each by the BCHL Department of Player Safety. Also this week, Cents captain Davide Patella, who hasn’t played in a game for the Cents in 2023, was traded to the Cowichan Valley Capitals in exchange for future considerations. The Capitals then traded Patella, who had 7 goals and 14 points in 29 games for the Cents this season, to the Brooks Bandits of the Alberta Junior Hockey League (AJHL). Defenceman Tristan Allen was traded to the Salmon Arm Silverbacks in exchange for forward Aidan Lindblad, and future considerations. Also in exchange for future considerations, forward Walker Erickson was moved to the Vernon Vipers. Dylan Emerson, a 2005 forward, has also been added to the Cents’ active roster for the remainder of the season.

“These trades help our hockey club for the end of this season and into the future. Aidan is a 2004 forward with good size and a heavy shot who will get a bigger opportunity with us down the last stretch of the season. We look forward to seeing him in our lineup this weekend,” said Head Coach and GM Curtis Toneff.

The Cents will next take on the Salmon Arm Silverbacks in a road game on Friday, January 13, before returning home to the NVMA for a game against the West Kelowna Warriors the following day. Saturday’s game is Literacy Night, where attendees are encouraged to bring a new or gently used book as a donation.