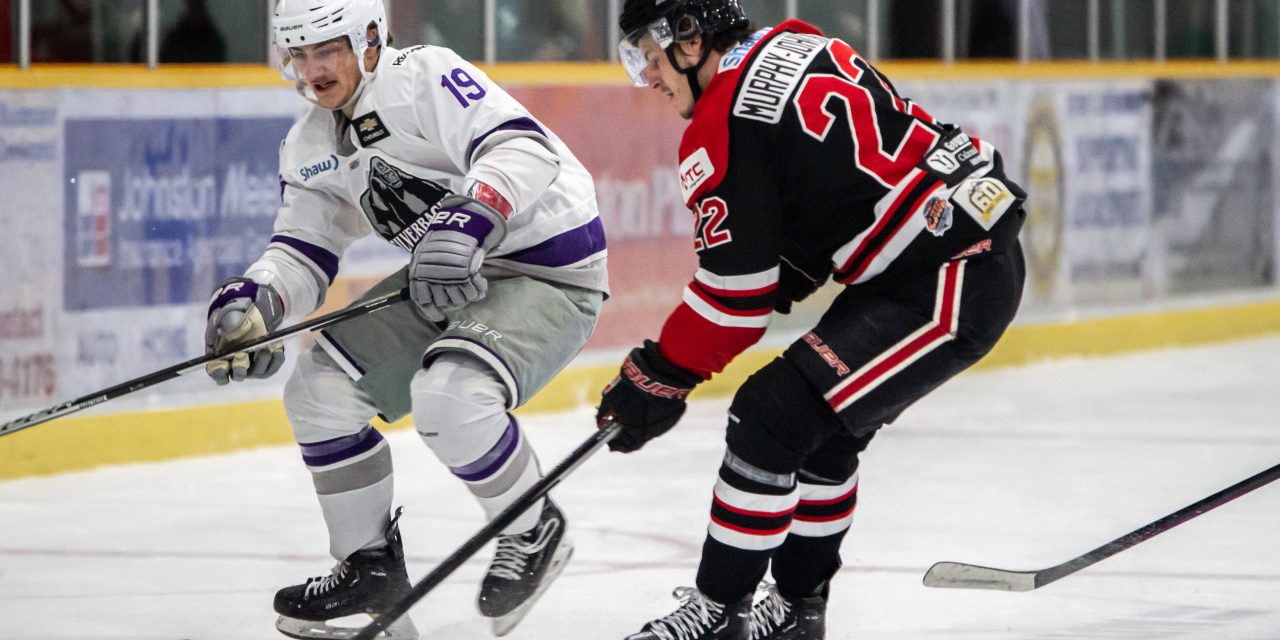 The Cents took on the Salmon Arm Silverbacks at home on New Year’s Eve, losing 5-1 in their final game of 2022. Photo/Christina Jean Photography

The Merritt Centennials ended their year with two consecutive losses, bringing a lackluster end to the 2022 portion of their 50th season. With a 4-0 loss to the Vipers in Vernon, followed by a 5-1 loss to Salmon Arm’s Silverbacks on home ice, the Cents now hold a 8–19–3–1 record moving into the rest of the regular season.

The Cents hit the road for a trip to Vernon on December 30, taking on the Vipers in a game at Kal Tire Place. With Johnny Hicks starting in goal, the first period was a relatively slow start to the game. Halfway through the first period, Ethan Sundar for the Vipers snuck one past Hicks, making it a 1-0 game. The second period was a mostly defensive one, with only one goal being allowed. Ayden Third scored on Hicks with just 63 seconds left in the second period to make the score 2-0.

The second period saw three Cents penalties for hooking, tripping, and roughing, respectively. In the third period, despite three man advantages due to Vipers penalties, the Cents were unable to capitalize. Reagan Milburn for the Vipers scored at the 13 minute mark of the third period, bringing their lead over the Cents to 3-0. Lee Parks would score the Vipers final goal with just 51 seconds left, resulting in a final score of 4-0 for the Vipers. Hicks saved 27/31 in the loss.

The Cents next game, an afternoon game on home ice against the Salmon Arm Silverbacks, took place on New Year’s Eve. Conor Sullivan started in goal for the Centennials in what would be another lopsided affair. The Silverbacks opened up scoring just two minutes into the first period, with William Lavigne scoring on Sullivan at the 2:27 mark. Salmon Arm solidified their lead to 2-0 at the 16:36 mark, with a goal by Jayden Grier.

The second period also leaned heavily in the Silverbacks’ favour, with the Cents once again failing to convert on three man advantages. The Silverbacks’ Isaac Lambert scored at the 2:15 mark, bringing the score to 3-0 just 22 minutes into the game. At the 11:38 mark, Hayden Stavroff brought the Silverbacks to a 4-0 lead. Seconds later, after a roughing call against Cents forward Jackson Krill, Salmon Arm capitalized on the ensuing power play by making the score 5-0 with a goal by Owen Beckner. The third period saw a number of penalties and only one goal scored, this time for the Centennials. Following a holding penalty against the Silverbacks, Jaxson Murray scored against Silverbacks goalie Matthew Tovell for a final score of 5-1. Conor Sullivan saved 37-42 in the loss.

Moving into 2023, the Centennials will first take on the Cranbrook Bucks in two home games at the NVMA on January 5 and 6. The Cents will then head back to Vernon for a game against the Vipers on Saturday, January 7. Puck drop is 7PM for both home games, and 6PM in Vernon.