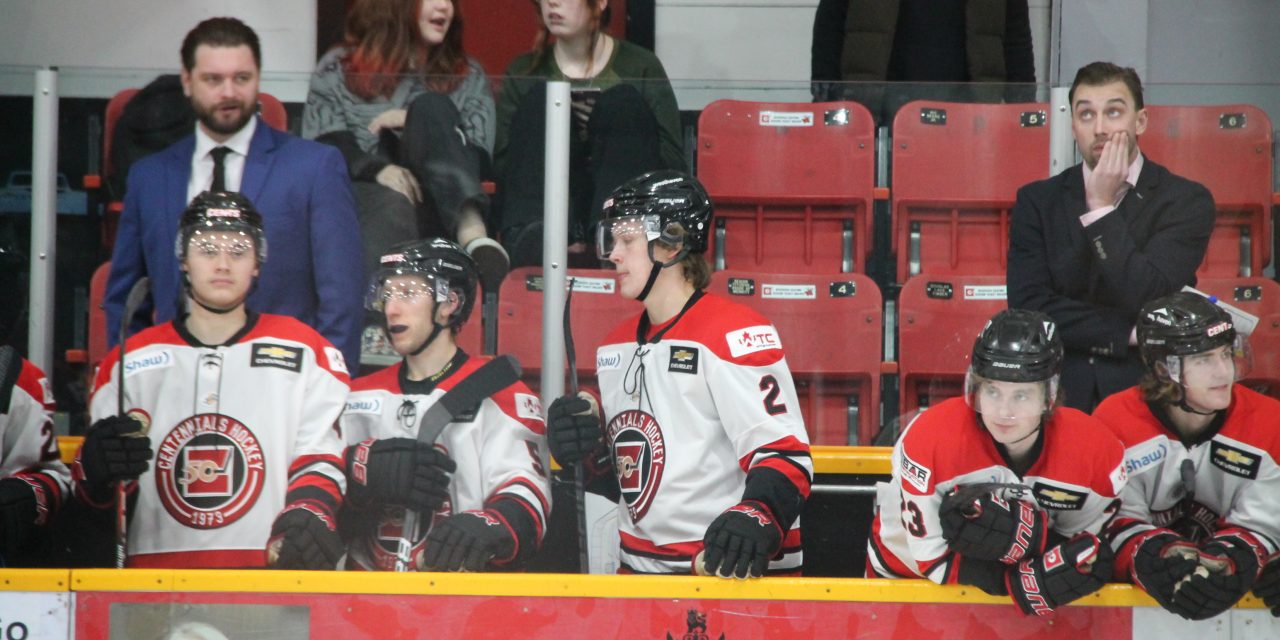 The Cents won half of their games this weekend, following a week with a flurry of roster moves. Photo/Marius Auer

The Merritt Centennials had a busy week, winning one of two home games after a week of trades. The trades saw Cents defenseman Chase Cooke and Carter Patterson head to the SJHL’s Broncos and AJHL’s Bulldogs, respectively, in two separate roster moves. The third move was the Cents’ acquisition of 20-year-old defenceman Tyler Bates from the Calgary Canucks.

Representatives of the Merritt Centennials say the trades are beneficial to all parties involved, including hometown player Chase Cooke, who has spent his entire BCHL career with the Centennials.

“Carter is a player with a year and a half left of junior hockey, he needs to play more to achieve his goals, and we felt we are doing him right in finding him a new opportunity in Blackfalds,” said Centennials Head Coach and General Manager Curtis Toneff.
“Over the past week, Chase and I had multiple conversations about what he wants to do for the remainder of his junior career, and in the end, Chase felt the desire to experience something new. Chase will be a great addition for Humboldt, and wish him all the best there.” Toneff describes new arrival Tyler Bates as a “mobile puck-moving two-way defenceman” that has “a lot to prove.” Coach added that Bates is chomping at the bit to get playing again, eager to add to the 80 plus games of Junior A hockey already under his belt.

Toneff said he’s confident in Bates’ skating abilities and instincts, and hopes the additional 20-year old player on the team will bring stability and leadership.

The Cents hit the ice for the first time this week on Friday, November 25, against the visiting Langley Rivermen. The Rivermen are currently tied for last place in the BCHL’s Coastal Conference, holding the same 14 points as the Cowichan Valley Capitals. The

Rivermen opened up scoring on a power play 8:02 into the first period, following an interference penalty against the Cents. Team Captain Davide Patella, assisted by Jaxson Murray, answered back with a Cents equalizer just 35 seconds later. The following two periods were less than ideal for the Centennials, with six penalties against them and four goals allowed throughout. The Cents took a 5-1 loss to the Rivermen.

Despite Friday’s loss, the Cents came out on top over the Salmon Arm Silverbacks in a 4-3 overtime victory. Forward Diego Johnson, assisted by Michael Shara, opened the scoring up for the Centennials just 1:48 into the first period with a goal against

Silverbacks starting goalie, Carter Richardson. Walker Erickson cemented the Cents lead with another goal just 3 minutes later, assisted by Jackson Krill. The Silverbacks rallied back to sink two goals before the end of the first period, making it a 2-2 game.

The second period saw no scoring, with just a few minor penalties. Five minutes into the third period, CJ Foley for the Silverbacks scored against Johnny Hicks. The Cents once again tied the game 10 minutes later, bringing the game to overtime. Jackson Krill, a Cents forward and BCHL All Star, scored the game winning goal for the Cents just 2:40 into overtime. A hard fought win for Merritt’s hockey team.

The Cents are currently 6-13-3 for the season, putting their win percentage at 0.341, and making them last place in the league’s Interior Conference.