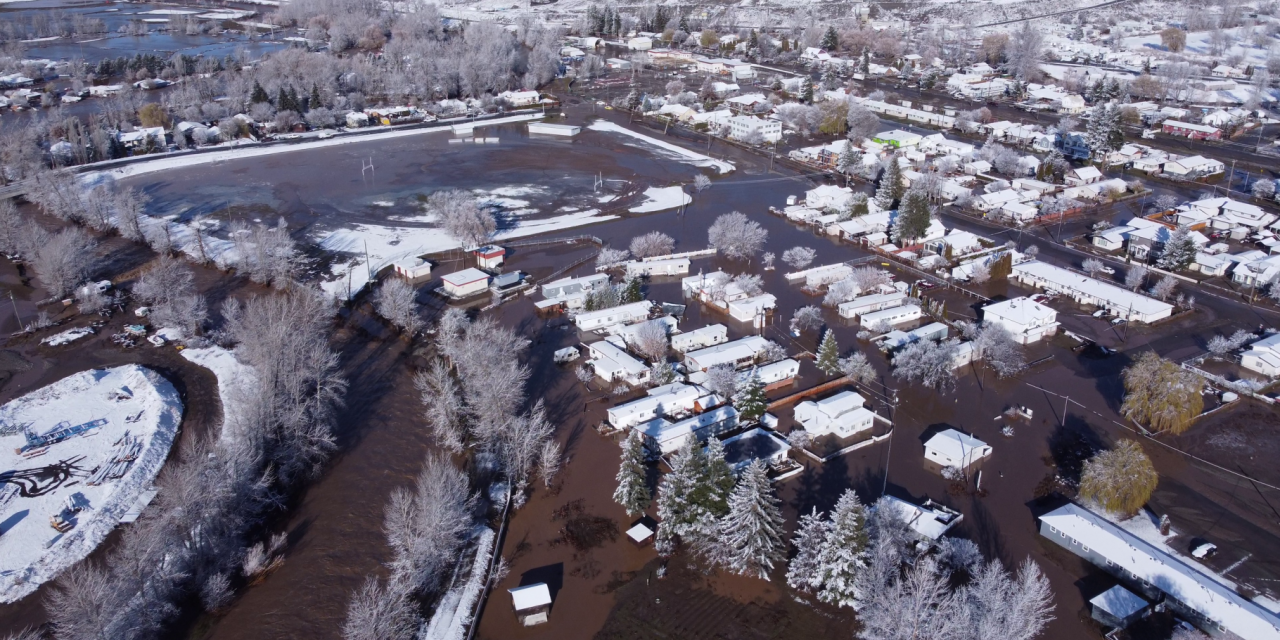 The City of Merritt is shown in the immediate aftermath of the flood that triggered the Nov. 15 Evacuation Order. (Greg Lowis/City of Merritt)

The city of Merritt continues to be under an Evacuation Order, but crews are hard at work to restore services and perform the necessary repairs to bring residents home.

“They’ve been looking for over a day now at the water distribution system and also the wastewater processing system, which are two separate challenges that both need to be addressed.”

Merritt’s wastewater treatment plant was inundated with flood waters, forcing an evacuation of the city as the Coldwater and Nicola rivers continued to rise on Monday, Nov. 15.

“The wastewater situation, they were saying they pulled apparently two dump trucks of debris out of the line last night alone, and there’s a lot of work that needs to be done to get that working again,” said Lowis.

“The pumps are still working, which is the good news.”

The rapid infiltration basins on the south side of the Coldwater river were completely submerged in water during the worst of the flooding, but have now begun to recover.

“Things are getting slightly better there in that the water levels are dropping, a lot more of the basin is visible than was even 24 hours ago, but we face a number of challenges, including that the Coldwater river is no longer where it was,” said Lowis.

Lowis informed the Herald that the Coldwater river is now flowing, likely permanently, down what was formerly Pine St. in the Collettville neighbourhood.

“The river has moved, we can’t do anything about that,” said Lowis.

“The unfortunate reality is that the Coldwater river at the west end of Merritt near its confluence with the Nicola river now has a new course. Managing how we’re going to deal with this, what it means for the infrastructure that used to be along Pine St., what that means for how we’re going to link up anything which survived this is something that we’re going to have to be addressing as part of the whole assessment and rebuilding program.”

It is currently unknown how many residents remain in Collettville following the reopening of the Houston St. bridge which connects the neighbourhood with the rest of Merritt.

“We’re confident that the population in the city is only going down because obviously nobody is allowed to return to Merritt at this time,” said Lowis.

Anyone still remaining in Merritt is asked to leave, travelling north via the Coquihalla or east on the Okanagan Connector as all routes to the Lower Mainland remain closed.

“Kamloops has taken so many evacuees they can’t take any more, we believe Kelowna are also approaching that position,” said Lowis.

“We’re really encouraging anyone who is evacuating at this point to look at a safe route that will either get them to Salmon Arm or Penticton, as we know that they still have the capacity to deal with Merrittonians who are evacuated.”

There are further issues to be addressed by the City before evacuees can return home. The flooding has caused extensive damage, with more being revealed as areas are being assessed.

“There are a number of other infrastructure issues that we need to look at, obviously the roads in the area around the river were severely damaged, there’s a lot of missing asphalt and really damaged roadways there,” said Lowis.

“But the big things Public Works remains focused on are the drinking water and wastewater systems because once we get those back online it will be possible to return to Merritt even if it’s not a Merritt in the best situation. Until we get those, it’s simply not safe for large numbers of people to be living here because we can’t deliver the basic necessities.”