Elections Canada is sending some Merritt voters to Lower Nicola to shore up the numbers between local polling stations.

The move has frustrated some voters.

In the Nicola Valley there are polling stations in Logan Lake, in Merritt at the civic centre and in Lower Nicola at the community hall.

There are 14 ballot boxes at the Merritt civic centre and four at the Lower Nicola community hall.

She said the number of electors located in the Lower Nicola area came up short, so Elections Canada redistributed some voters from the southern part of Merritt to Lower Nicola.

Merritt residents who are supposed to vote in Lower Nicola can still vote at the civic centre by asking to be issued a transfer certificate, Salomon-de-Friedberg said.

She said she’s photocopying the certificates to ensure there are enough to go around.

However, it’s important Merritt voters do vote in Lower Nicola if they are instructed to in order to avoid any potential ballot shortage, as experienced during the advanced polls, should the voting place at the civic center be overwhelmed, Salomon-de-Friedberg told the Herald.

“It will create a problem because we’re going to have to start borrowing from each other, and if it’s really busy, mistakes happen,” Salomon-de-Friedberg.

She said she’s encouraging people to vote where assigned so Elections Canada can account for how many people voted in each polling division.

Another Merritt resident, Cherylle Douglas, received a transfer form, but she said it was only after she refused to go to Lower Nicola, citing health problems.

“There were a lot of people being turned away [to go to Lower Nicola],” said Douglas. “I was number 12 on the list that got a transfer and the gentleman that did my transfer said they had turned away at least 100 people.”

Douglas said she was skeptical that the selection was random. She lives with her daughter and her father at the same address on the south side of town. Both herself and her daughter are on employment insurance due to disability, while her father receives a Canada Pension. His voter card said to vote at the Merritt Civic Centre, while Douglas and her daughter were directed to Lower Nicola.

“I don’t know if that’s relevant, but from what I’m hearing, people that are on disability or on welfare are being told to go to Lower Nicola.”

Elections Canada Spokesperson, Dorothy Sitek said that unlike in the B.C. provincial election where electors can go to any polling location to vote, in the Federal election one must report to the poll associated with one’s address.

Council meeting at a glance 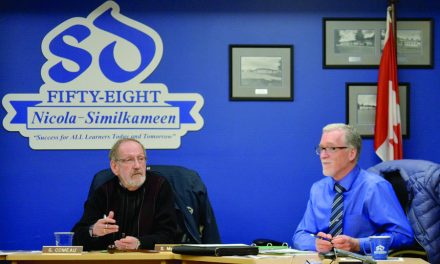