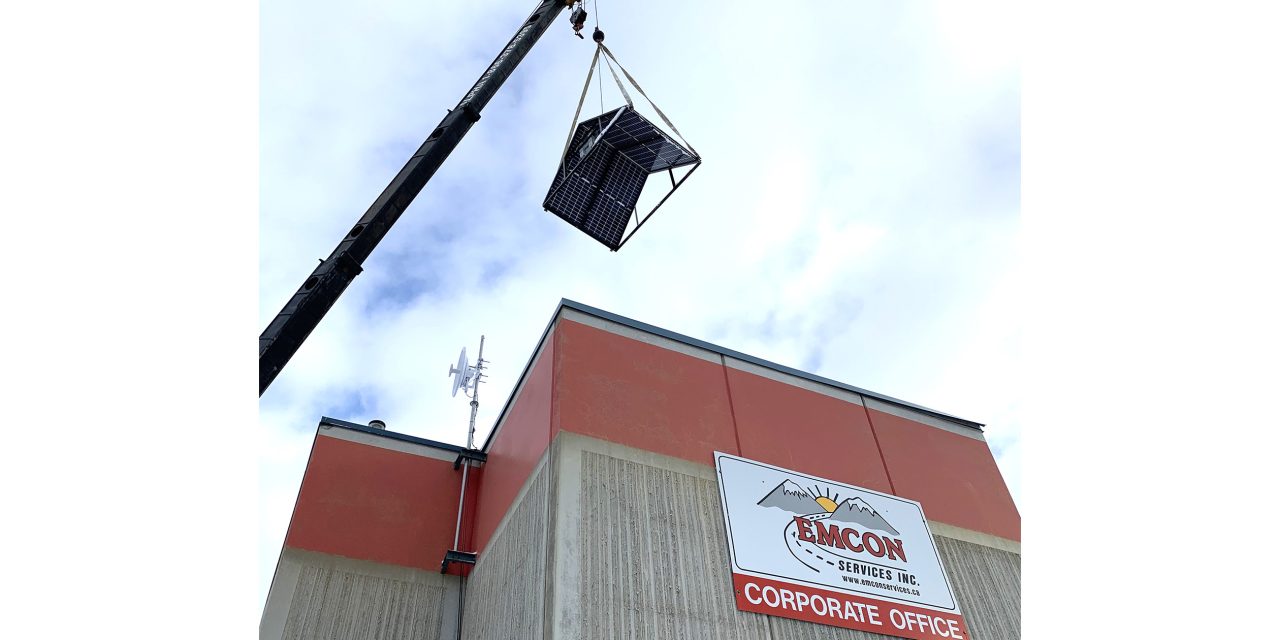 A solar panel array is installed on the roof of Emcon Services in Merritt.

Emcon Services, a Merritt based company specializing in highway maintenance, paving, bridge construction, material processing and equipment hauling, recently took their first step into utilizing green energy by having solar panels installed on the roof of the Merritt division.

“They are mounted in a triangle configuration due to the alignment of the building to south. We support the investment in alternative energy, and solar is relatively easy to make work with all the sunlight we have in Merritt.”

Rizzardo added that when the company is ready to add electric vehicles to their fleet, the solar panel installation will allow for a minimum of three EV charging stations.

The panels were supplied by Caterpillar Energy, with the installation handled by Eric Little, co-owner of Solar Energy Innovations (SEI) Logistics, and his team.

“We managed to build all the components during the flooding,” said Little.

“My team is incredibly proud of what we accomplished; all things considered. This 40-panel system was installed in less than a day, showcasing the ease of installation during any time of year, either be a heat wave or blizzard.”

Little noted that, in fact, the installation was completed in a record time of two hours.

“The triangular frame was mounted on interlocking rubber mats to protect the new roof we just installed late this summer,” said Rizzardo.

“We also invested in four new heat-cool rooftop units for the building. This year we have invested in the infrastructure of our corporate office. The lower floor offices were outfitted with LED ceiling panels. We will follow up with the replacement of fluorescent ceiling lights on the second floor in early 2022.”

The project comes with a 25-year warranty and Rizzardo estimates that Emcon will break even on the capital investment in approximately ten years, less if other capital improvements are completed.