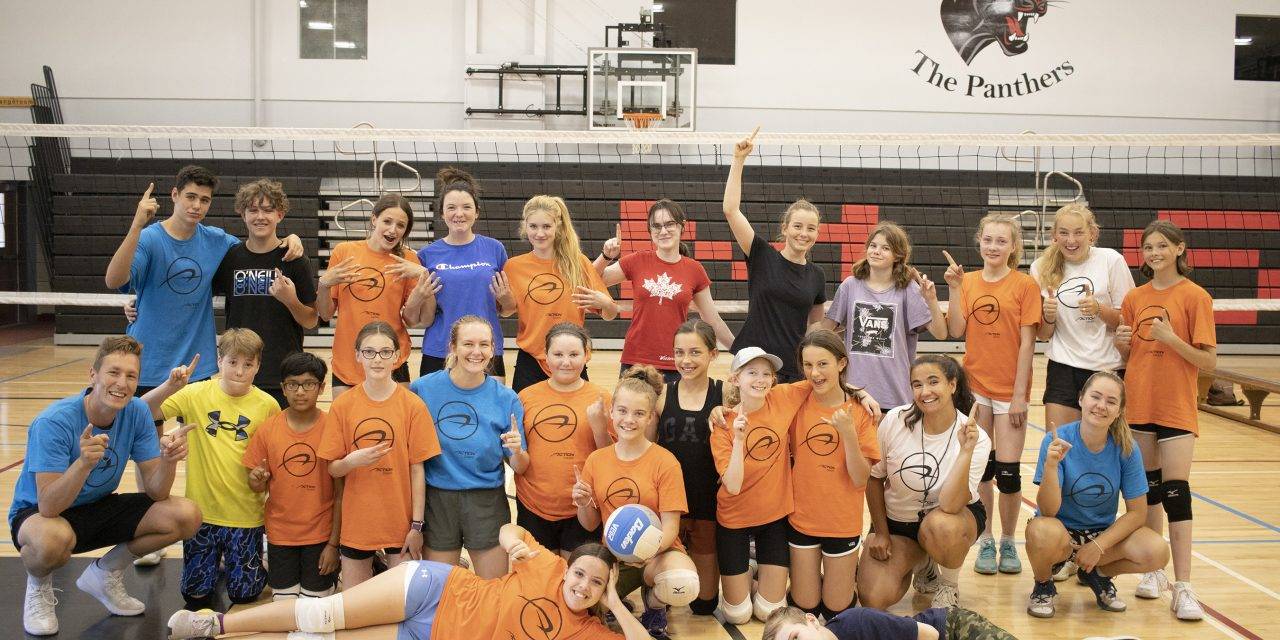 With limited to no prior experience, the majority of campers used the volleyball camp as their introduction to the sport. Izaiah Reyes/Herald

The Merritt Evangelical Free Church, with the help of Athletes in Action, hosted a volleyball camp at Merritt Secondary School (MSS), from July 18 to 22. The camp was held to teach and train kids between the ages of 10 and 14, further establishing the sport in Nicola Valley.

The volleyball camp took place from 9 a.m. to 3 p.m. everyday. Evangelical Free Church Pastor Josh Dekker is one of the main organizers of the whole event. He noted that this is the first time the church did an event like this.

“We want to let the kids develop their skills more than just during the season,” said Dekker, who also coaches the MSS jr. girls volleyball team along with his wife, Cassidy Dekker.

“Cassidy’s cousin, Roxanne, reached out and said ‘we run camps in the summer time. If this is something you’re interested in, we would love to come to Merritt.”

The camp only took three months to be organized. It marks the first time Evangelical Free worked with Athletes in Action. The non-profit Christian sports ministry provided coaches and shirts for the camp while the church booked the venue, promoted the event, and provided the campers with a pizza lunch on their last day.

“It’s awesome to see the kids in the summer time, to let them run around and work on their skills. We were able to hit every skill in volleyball; passing, setting, spiking, blocking, and defense,” Dekker explained.

“Only three or four players, from all the kids here, have played organized volleyball. Everybody else only has experience from their school, through gym class, so its been pretty cool to see kids really start from scratch.”

Among the experienced players, from the crop of 21 campers, was Tevin Rooke. The Grade 7 athlete heard about the camp through his youth group at the Evangelical Free Church.

“Everyone here is always super fun to be around,” he said. “There’s a few pretty good players here and they’re a lot of fun to go up against.”
Rooke has two years of playing experience at Bench Elementary. He was happy about further developing his skills at the camp.

“We had drills each morning and that taught me a lot.”
Being an event sponsored by the church, the campers also had conversations with Dekker and other church volunteers about religion.

“At this event, we do talk a little bit about the bible and Jesus, each day,” Dekker explained. “I want these kids to love sports but also for them to know and appreciate Jesus.”

The success of the event has opened up the possibility of future camps to be done in Merritt.
Dekker and the rest of the volunteers look forward to future events.

“This whole idea and format would be something that we’d want to do again. We would like to improve on what is already here for next time,” he said.

“There plenty of kids in this town and many who we want to introduce to volleyball. Working together as a team, for a common purpose is an amazing thing. It builds character every moment you’re playing it.”