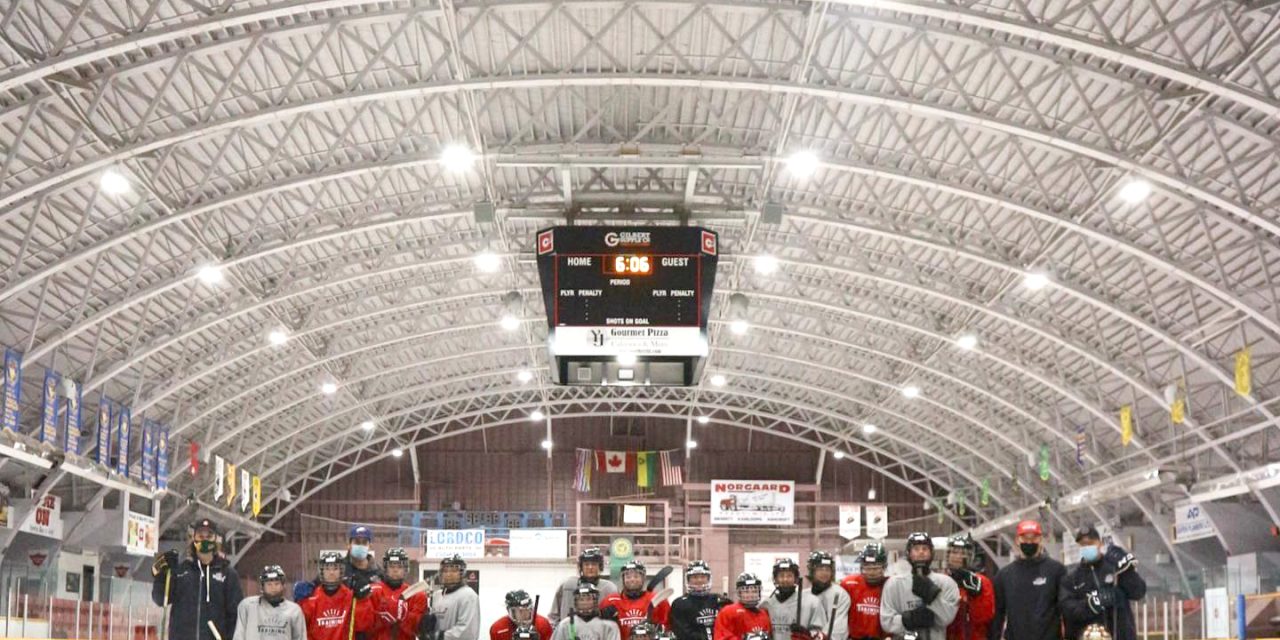 A former Centennials player, also the team’s current goalie coach, is once again putting on his summer hockey camp at the Nicola Valley Memorial Arena. Looking to bring a professional level training course to Merritt, local hockey player and firefighter Tyler Steel is bringing together high-caliber instructors and summer camp fun for the second year in a row.

With instructors that play on teams in the National Hockey League (NHL), British Columbia Hockey League (BCHL), Western Hockey League (WHL), and other professional levels, the course hopes to help young hockey players in Merritt get on their way to doing the same. Two age groups, 9 to 11 and 12-15, are available, and the groups’ days will look very similar.

“Each day will consist of two on-ice sessions and one off-ice session, where we’ll be going over to the Persistence Training Centre,” said Steel.

“We’ll be working on some hockey-specific strength and conditioning exercises, and also just educating them on the importance of training, and training specific muscles, in order to help their hockey skills.”

Attendees to the camp will hit the ice twice a day while working on fundamental hockey skills, from beginner to advanced levels. Steel, one of the instructors, will help aspiring goalies fine tune their skills in front of the net. Students will engage professional athletes for tips and tricks on best practices as they sharpen their skills, or build new ones.

Max Millam, a forward for the Philadelphia Flyers, will video conference in for lectures with attendees. The same goes for Brandon Segal, a right wing who played for five different NHL teams during his career. Steel said he is excited to have the pro-players on board, adding the two are former teammates and coworkers.

“We have two guest speakers that are going to be video calling in. One is a retired NHL player, and the other is a current NHL player. I’m actually a firefighter in Richmond, and one of them I work with there. The other I played with when I was playing college hockey.”

Steel is a pro hockey player himself, getting his start in the sport with the Merritt Centennials from 2010 to 2014. Ultimately returning to the team as their current goalie coach, in between he played for Brown University on scholarship for 3 seasons, and the Huntsville Havoc and Rosetown Redwings for one season each. Steel works for the Richmond Fire Department, but resides in Merritt.

The idea for the hockey camp stems from the absence of one, with Steel seeing the need for a hockey camp that combined a fun summer experience with high level coaching from professional hockey players. While Merritt is undoubtedly a hockey town, this experience was one Steel says was previously unavailable in Merritt. He added that it remains inaccessible for some, which struck a chord with him.

“Myself, growing up, I was in a position where my family couldn’t afford the extras. I wouldn’t have been able to go to a camp like this, especially since I had a sibling who was also in hockey, so it’s quite the expense.”

Steel engaged local business to sponsor children who can’t afford to attend his camp due to economic hardship, being impacted by flooding, or other financial reasons. He said response has been great, with multiple local small businesses stepping up to support their home-town hockey players.

“I currently have eight businesses who have sponsored an entire child each, so we’ll have eight sponsored children attending the camp this year. There definitely is still more room if local businesses or people would like to sponsor spots.”

The Steel Training Company 2022 Hockey Camp will take place from August 23 to 26. For more information, visit www.steeltrainingco.com, or email steeltrainingco@gmail.com.