From soldier to Chief: Percy Joe 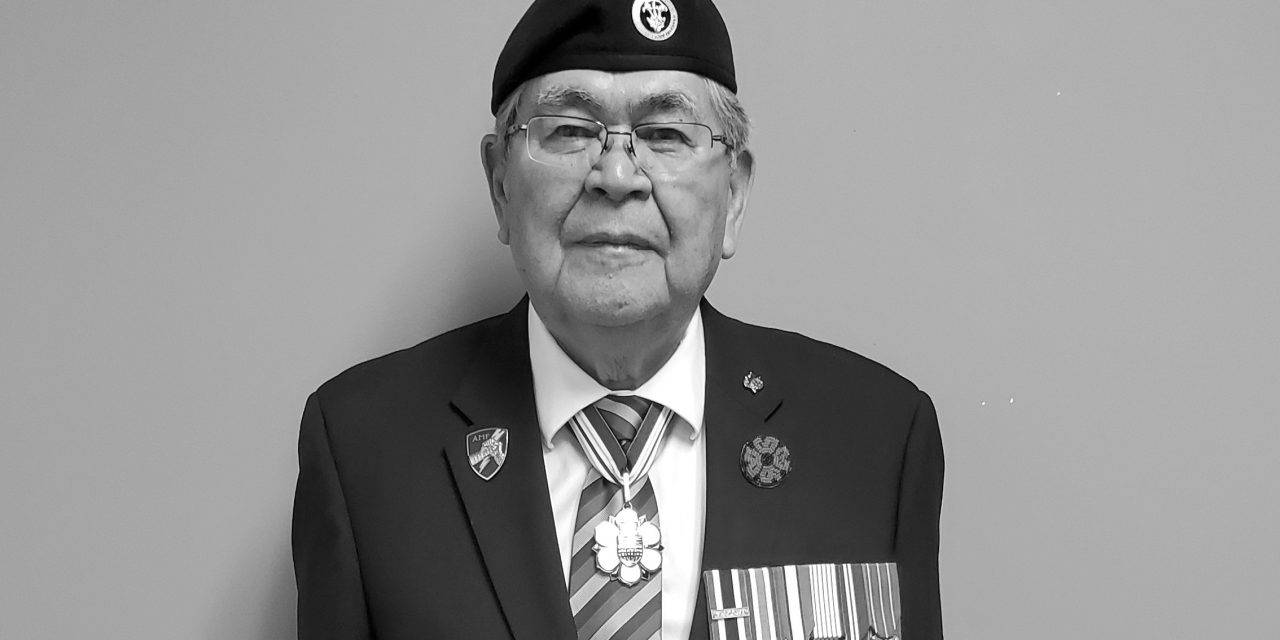 Despite being just a few short years after the end of the Second World War and the Korean War, the 1950s was still a time when the Canadian Armed Forces beckoned to young men dreaming of adventure.

Percy Joe was one such young man, who began to consider a career in the military while still a teenager attending St. George’s Residential School in Lytton.

“There was actually a reserve portion from the Rocky Mountain Rangers that were in Lytton,” Joe reminisced.

“At the young age of 15 I tried to join them, but you had to be 16. So I hung around with them, and I used to attend their meetings until I turned 16, and then I became a member of the Rocky Mountain Rangers.”

That was in 1957 and from there Joe was sent to a training centre in Wainwright, Alberta.

“Our instructor with the regular forces was with the Queen’s Own Rifles and I thought they looked sharp,” said Joe.

“So, at my first opportunity, this would have been probably 1960, I decided to join the regular forces.”

Following six months of basic training in Calgary, Joe was sent to Germany during an extraordinarily tense time on the world stage.

“Ths Cuban Missile Crisis was on; the Bay of Pigs had just happened, and they needed the full strength of NATO,” explained Joe.

“I was posted with the second battalion of the Queen’s Own Rifles in Calgary, and then I was posted to a first battalion that was in Germany serving with NATO.”

“I think about it now, and my two-year tour in Germany was definitely a highlight,” Joe continued.

“We did a lot of sports there.”

Joe was part of the cross-country team that won a trophy no other Canadian team has, and also represented the British Army of the Rhine in England, where they competed against Olympic runners.

“At that time, the British had their Olympic runners as part of the army to keep them training every day and be paid,” explained Joe.

“So, we ran against some Olympians also, which was an interesting thing. We learned a lot from them.”

The Canadians excelled in the often less than ideal conditions, winning even with improper footwear or in icy or muddy conditions. Although they didn’t beat the Olympic runners as individuals, they often bested them as a team, and during one race Joe even passed a British Olympic runner he’d come to know.

In the autumn of 1963, Joe was returning home and looking forward to setting down quietly on the peaceful soils of home, but that was not meant to be.

“Flying back on Nov. 22, 1963, President Kennedy was assassinated when we were halfway across the Atlantic,” said Joe.

“Our plane was ordered to fly in a circle for about two hours while they were deciding what to do with us. Continue to Canada or go back to Germany?”

Eventually, his plane was granted permission to land at CFB Trenton and Joe returned home to BC, ending up in Victoria where he did the majority of his service.

Looking to advance through the ranks, in 1964 Joe undertook the first of many courses he would complete over the years, becoming a Junior NCO and then following through for another promotion shortly after.

“That was my first step into the leadership, although I was already then what was called a Lance Corporal, which was an appointed rank,” explained Joe.

“I moved on up the ranks after my courses… I travelled back and forth across Canada almost every year for courses in Camp Borden, Ontario. I think I’ve gone to Camp Borden seven or eight times taking different courses there.”

In 1965, Canadian troops were needed in Cyprus as part of the United Nations Peacekeeping Force which hoped to prevent additional fighting between the Turkish Cypriots and Greek Cypriots following violent conflict that had already cost hundreds of lives on the island.

“I went in April and did a six-month tour there with the UN,” said Joe, who noted that they were not welcomed with open arms by any means.

“It was still kind of a wild west show there. It was about one year into when the UN went into Cyprus and we were, I think, the first unit that did six months, the rest had done three-month tours. They still loved shooting at you, and they loved the colour blue, it was a nice target. So, we were shot at a few times, and didn’t enjoy that at all.”

Joe had also been trained to be an instructor for the Winter Warfare Course, training that would come in handy during his next posting.

“That covers how to handle weapons in the cold weather, so they don’t freeze up,” Joe explained.

“In the army, everything had to be oiled down all the time, well you can’t put too much oil on there or everything will start freezing. And how to dress properly and how to care for each other. In cold weather, you had to ensure you had a partner because within 30 seconds you could basically get frostbite, particularly at -70 with a little wind blowing.”

Joe himself suffered frostbite on his nose, cheeks and ears.

“I had my hood on, but the wind was blowing,” explained Joe.

“And you don’t feel it, so you have to almost every minute be checking each other and learn how to unthaw yourself. During our course one of our candidates lost a toe because he froze his toe and then he warmed it up too quickly and of course gangrene set into the foot.”

None of this was a deterrent to Joe, who served in Canada’s far north in 1967.

“Canada wanted to show its presence in the north,” said Joe.

“Russia was trying to claim portions of the north because Canada was not showing that it belonged to them. We were up there for six-week tours, just walking around with the flag being Canadian.”

That same year, Joe became part of what was known an as Allied Command Europe (ACE) Mobile Force, a reinforcement to the NATO forces in Canada, and was sent to Norway for training, first in June and then again in the winter of 1969.

“I was on a reconnaissance platoon at that time. As a rapid mobile force, we had to get all of our equipment over there within seven days and be prepared for whatever needed to happen. We were up at the very northern part of Norway, the Tromsø was where we landed, and Tromsø is about 200 miles north of the Arctic Circle, so were up on top of the world. I felt like if I looked over the mountain, I could probably see Russia down below, or be looking over Finland.”

Joe eventually became a Master Corporal and was up for a promotion in 1971, but after 13 years, he decided he’d had enough of the military life and stepped down to become a full time civilian.

“Well, there wasn’t much need for machine gunners or mortarman, or any kind of weapons,” Joe joked about his transition from the Armed Forces to the regular workforce.

“I worked in construction. The funny part was I worked for a small company out of Penticton, and we did a lot of rock stabilization work, contract work for CN and CPR and some for the highways, so we had to do dynamite work, but I didn’t hold a ticket to do the explosives work, even though that was my background.”

Despite many years handling explosives in the army, Joe found it humorous that he wasn’t considered certified to do it on the jobsite.

Following his stint in civil construction, Joe got into the concrete business for ten years.

From the time of his discharge from the CAF, Joe has been active in serving his community of Shackan.

“I’ve been a Chief there for 45 years, and I was on council for two years, so I’ve served 47 years to my community,” said Joe, who tried to retire unsuccessfully in 2008 before finally stepping down in 2018.

Joe has also been active in advocating for equal treatment and reparations for Indigenous veterans since 1999. Joe’s personal connection to this cause stretched back to the beginning of his military service, at a time when Indigenous people were still not recognized as citizens, disenfranchised, and forced to give up their ‘Indian Status’ in order to join the Armed Forces.

“Then when they came back and did not go strictly to the Indian reserve but went somewhere else, you were not entitled to compensation. So, it’s really a complicated thing. We’re still fighting about that.”

Joe did encounter racism during his military career and was once reprimanded for confronting a superior officer regarding one such incident. He was charged with insubordination and knocked down a rank, which he accepted without complaint, considering the confrontation of the man’s attitude worth the cost.

“By the time I walked out of the commanding officer’s room to the hallway I met another NCO that wanted me to go on a reconnaissance platoon, and the colonel liked me he wouldn’t take anybody else, so he bumped me back up to my rank.”

As Joe ages, he finds that Remembrance Day develops more meaning, particularly as those he served with begin to pass. Each year it becomes more important to them to see their service remembered.

Joe is still active in the discussion surrounding the rights and entitlements of Indigenous Veterans and is a member of a recognized Veterans group under the Assembly of First Nations. In 2018, Grand Chief Percy Joe also received the Order of BC.