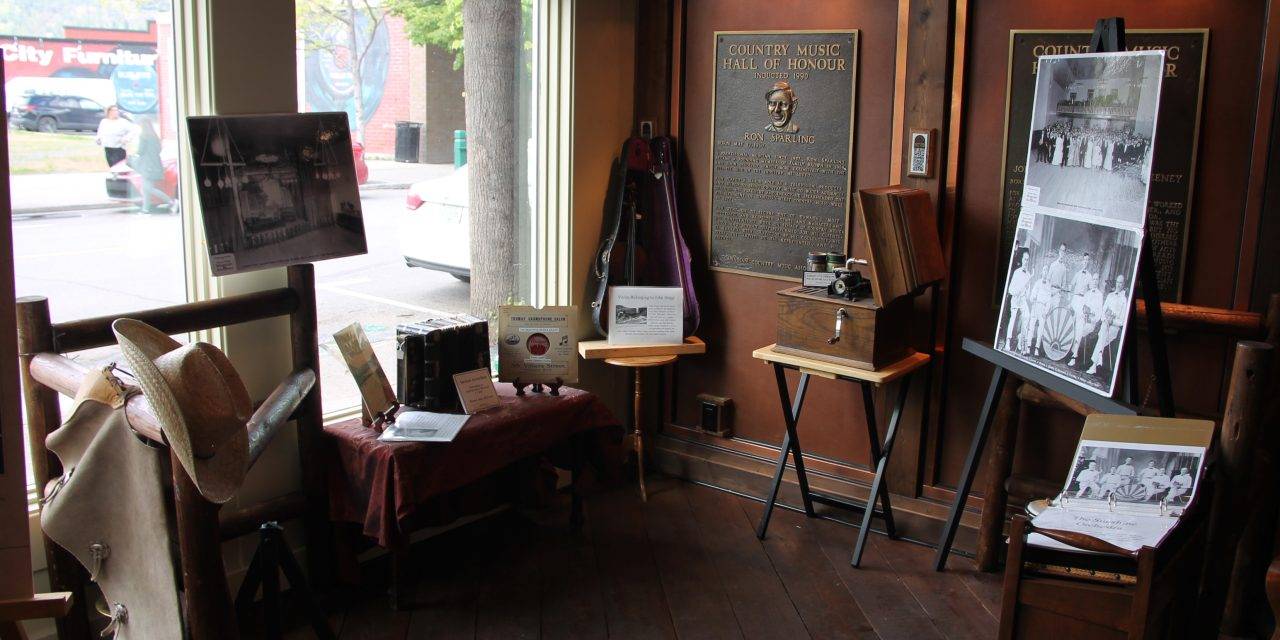 The new display at the Canadian Country Music Hall of Honour will be up all summer, and offers a view of Merritt’s creative and artistic history. Marius Auer/Herald

A Brief History of Music in the Nicola Valley is a new display at the Canadian Country Music Hall of Honour on Quilchena Avenue, with two community organizations coming together to support each other, as well as art and history in the community.

The new display boasts a small but carefully curated collection of local artifacts all related to music produced, written, and enjoyed in the Nicola Valley throughout history. This is a joint collaborative effort between the Canadian Society of Country Music and Heritage (CSCMH) and the Nicola Valley Museum and Archives (NVMA). A fiddle belonging to a local miner killed in the Diamondvale Mine explosion of 1912 is CSCMH Director Susan Roline’s favourite piece.

“Because I’m partial to fiddles, I like the fiddle piece. I know the Hogg family very well. When I was growing up we were neighbours to one of the Hogg families,” said Roline.

Roline says it’s these community connections that make the Hall of Honour and its displays so interesting and attractive to locals and visitors alike, with hall inductees such as Dick Damron and Lucille Star even having family members residing in town. The new History of Music display not only highlights the instruments that were used to create the music, but the locations, people, and stories behind it.

“We want to bring an attachment again to the hall. We don’t have any inductees that are from here, but a lot of them have connections to Merritt through family.”

While the driving force behind the new display is the promotion and awareness of music’s impact on the Valley’s history, the organizations hope to support each other by promoting themselves together through new initiatives. This is the second time the two organizations have worked together, organizing a Remembrance Day display last fall at the Hall of Honour.

“We want to help other groups that don’t have a downtown presence, like the museum. A lot of people have a hard time even finding the museum. I don’t think enough people are aware.”

Recent changes at the CSCMH saw the Hall of Fame replace its name with the Hall of Honour title, losing the official designation to a new site in Calgary, Alberta. Roline said the transition was only a slight inconvenience, and the organization is looking forward to an exciting future of music based programming and community initiatives.

“We’re trying to do live music events quarterly. We’ve been holding the songwriter sessions, and I guess a lot of people don’t understand what that is exactly, a lot of them thought it was just for songwriters.”

“It’s an audience listening to how and why a song came about by the person who wrote it. After two hours, it’s an open jamming session,” clarified Roline.