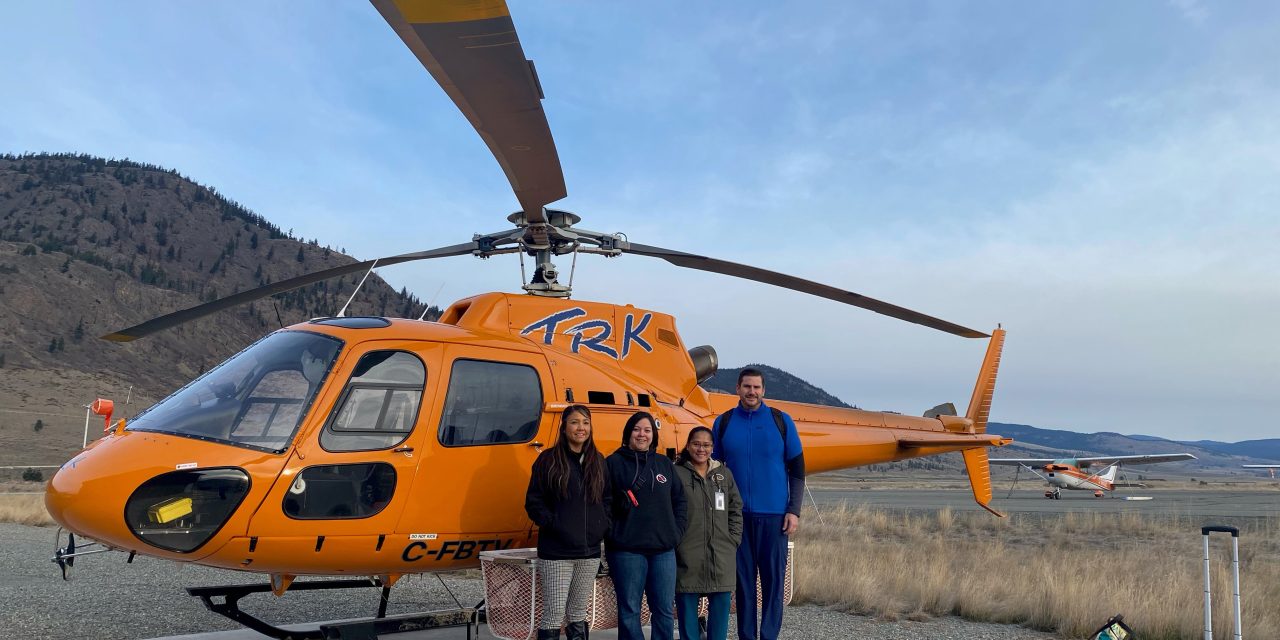 Health and mental health professionals prepare to take off from Merritt airport.

On Dec. 3 a helicopter carrying health and mental health professionals took off from the Merritt airport en route to Nicomen.

Nicomen, an indigenous community of roughly 50 people located just off Hwy 1 east of Lytton, has been cut off since the only bridge providing access collapsed in the extreme flooding event of Nov. 15.

Despite the Nicomen river becoming a raging torrent, wiping out whole trees and massive boulders, the residents of the remote reserve decided to remain in their community rather than evacuate.

“There was a lot of the community that evacuated during the wildfires, but they didn’t have a great experience I guess with ESS supports and wraparound supports,” explained George.

“So, this time they decided not to evacuate, so they could stay within their homes.”

When the bridge washed out, communications also went down and the people of Nicomen found themselves completely cut off from the outside world.

“We knew it was crucial to have mental health supports, because by this time they were in isolation for almost a two-week period,” said George.

A request to the province through Emergency Management BC was approved and NHSS was able to organize a helicopter to bring the necessary personnel in, including Merritt physician, Dr. Morgan Lyttle.

In order to receive other supplies such as food, water, toiletries and other essentials, the community had constructed a helicopter landing pad, and it was there that the medical flight was supposed to land.

“It was kind of interesting on our day because they got the coordinates wrong and ended up landing somewhere else,” laughed George.

“It worked out better because they were closer to the health centre, but the nurses were literally climbing under barbed wire fences, it made it a little bit of an adventure in.”

The First Nations Health Authority (FNHA) will also be delivering regular prescription medication on Dec. 9 when nurses are flown in for a vaccine clinic.

Although a temporary bridge is expected to be in place by Dec. 15, another flight in may be organized if road access to the community is delayed, with a focus on Nicomen residents’ mental health.

“They’ve had a long year with the Lytton wildfire impacts, and this is re-traumatizing, I think. And with a community that already has such a lack of service due to the rural and remote aspect of it, they depended on the Interior Health site within the community of Lytton, so there’s been a real gap in health services for them, and a lot of our canyon communities.”

The flooding, which has impacted around 30 BC communities, has only exacerbated the issues many face already after enduring a global pandemic, record breaking heat and an intense wildfire season.

“It’s created a lot of challenges and obstacles, and there were already a lot of barriers in place,” said George.

George commended the resiliency of the community and the strong leadership of Chief Drynock, as well as Health Director Arlene Edwards and councillors Darren Cressy and Chris Walkem.

Also integral were FNHA, and Interior Health, which paid for the physician’s time, and the NHSS.

“NHSS is such a new society, but I think this shows some of the great work we can do with our partners,” said George.

“Interior Health, FNHA, the doctors, Divisions of Family Practice, it was a real collaboration.”

In future, NHSS hopes to host a “mental health event”, perhaps bringing some form of entertainment to the tight knit neighbourhood.

“To let the community know that they’re not forgotten about, and that we care, and we’re here,” said George.

“And that we are worried about them and their mental health, and their general health, too.”