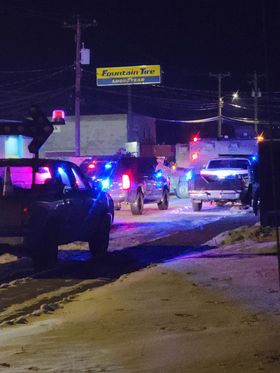 A heavy police presence could be seen in the 2600 block of Granite Avenue last night, as Merritt RCMP and provincial counterparts carried out a search warrant in relation to Friday’s kidnapping case arrests.

It has been a nerve-wracking week for Merrittonians, as shootings took place on Tuesday (November 15) and Friday (November 18), both of which were believed by police to be targeted incidents. No injuries were reported as a result. A number of police operations took place throughout the week, including Friday’s hours-long standoff on Nicola Avenue, which resulted in the arrest of three individuals who were charged with kidnapping. It is unclear if this occurrence is related to the earlier shootings.

The Herald received multiple reports of police operations in the Collettville, Diamondvale, and Central areas over the weekend, some of which saw officers draw their guns and employ the tactical use of flash bangs and loudspeakers. Sgt. Josh Roda, Merritt’s acting detachment commander, confirmed to the Herald that police responded to a shots fired call on Saturday (November 19), where the suspected shots were quickly determined to be fireworks. On Sunday, November 20, Merritt RCMP and members of the Emergency Response Team (ERT) executed a search warrant in the 2600 block of Granite Avenue in relation to Friday’s kidnapping case. No further arrests were made. The Merritt RCMP continue to investigate a number of ongoing cases.

The Merritt RCMP continues to ask for the public’s assistance in locating Ronald Karlson, a Merritt-man wanted on a province wide warrant. Those with information about Mr. Karlson’s whereabouts are asked to call the Merritt RCMP at 250-378-4262, and are advised not to approach Karlson.