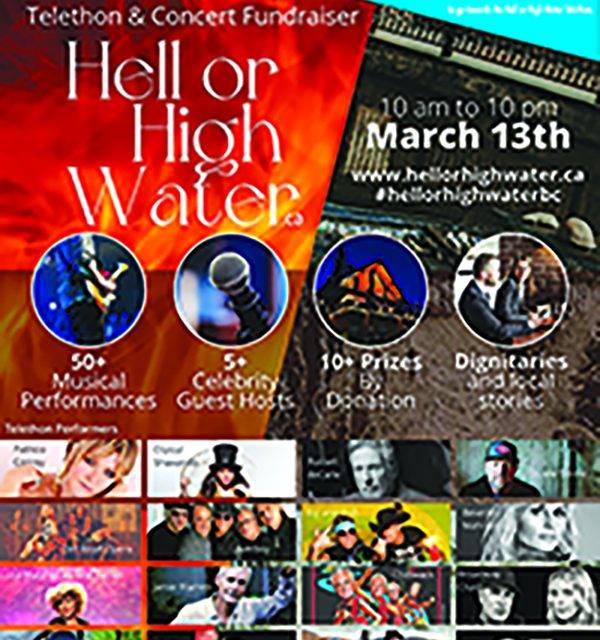 The Hell or High Water concert and telethon fundraiser is hoping to raise $2 million for fire and flood relief for the communities of Lytton, Merritt, Princeton, Abbotsford, Monte Creek and surrounding First Nations communities.

The concert, which featured such artists and celebrities as Aaron Pritchett, Tom Jackson, Lisa Brokop, Loverboy, Chilliwack, and Amber Marshall of Heartland fame, ran from 10:00AM to 10:00PM on March 13 and, along with the accompanying telethon, raised more than $100,000.

Prior to the concert and telethon, the Merritt Rotary Club raised approximately $825,000 through their own fundraising efforts. Following this Hell or High Water was able to bring that number up to roughly $927,000 – with $102,000 of that being dispersed to affected communities outside of Merritt.

“Now, with the efforts of the Hell or High Water Fundraiser all proceeds collected, including those made online and through the telethon portion of the event, will go directly to Rotary Merritt, who will then work with non-profits who are currently working with affected areas to disperse the funds to communities and individuals affected by the natural disasters,” reads a fundraiser press release.

One of the leading concert organizers, Greg Girard of ehCanada Travel, has made a big commitment to drive the funds up to the $2 million, exclusive to the Hell or High Water fundraiser portion.
“I believe in British Columbians and Canadians,” said Girard.

“I know Canadians care about families, so much so, when we hit $1.5 million, I will shave off my head, eyebrows and soul patch live for all to see, for the last push to $2 million.”
Girard also noted that the majority of donations came from donations of $10 to $100.

“That’s the people stepping forward, that’s your everyday Jane and Joe Smith putting ten bucks in,” said Girard, who hopes to also solicit corporate donations in the coming weeks.
To make a donation, or to learn how you can support fire and flood ravaged communities, please visit https://hellorhighwater.ca/ in the next two months.