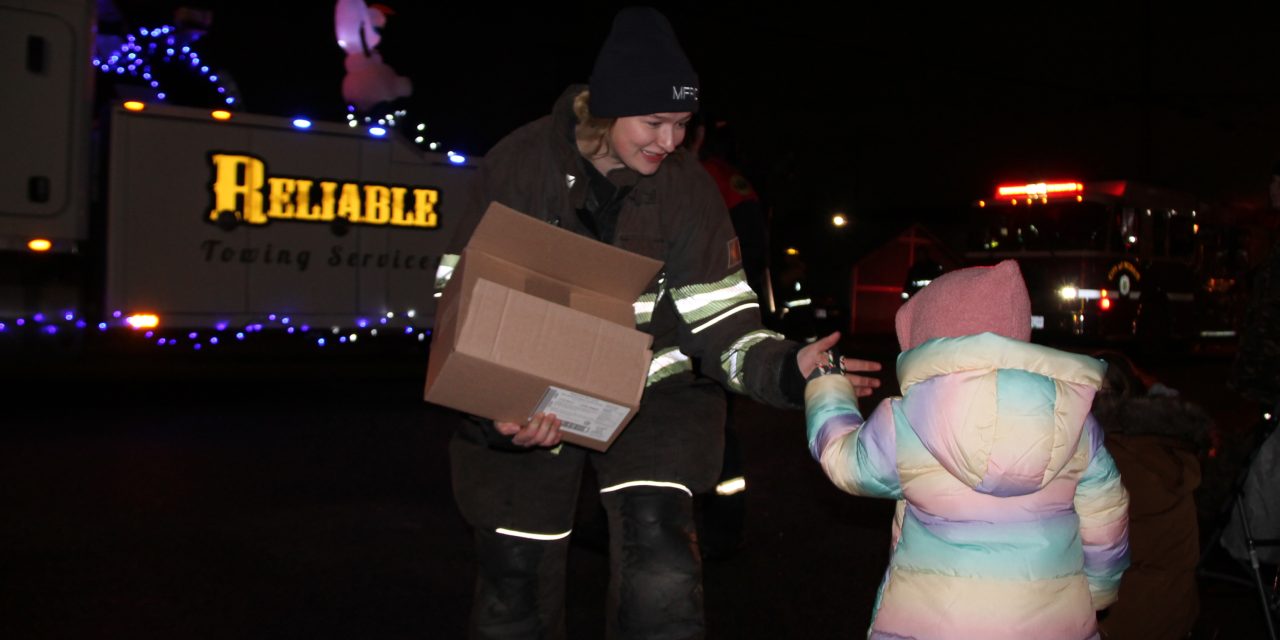 Kids watching the parade were treated to candies by participants of the Country Christmas Parade. Marius Auer/Herald

Merritt Country Christmas Week made its glorious return last week, filled with its usual festivities for the whole family. The events kicked off once again on November 21, and ran through to November 27. Along with the community tree lighting, Civic Centre craft fair, live music, and dance recitals, jolly old Saint Nick made an appearance at a number of events.

The week started off a bit rocky with the ongoing RCMP incidents, which saw Monday’s tree lighting ceremony postponed by a day before festivities fully kicked off. Wednesday and Thursday saw the Elements Dance Recital and Community Concert, respectively, both events well attended and received by the community. The Canadian Country Music Hall of Honour hosted a live music night at their Quilchena Avenue building on Saturday featuring a number of local artists. The iconic Santa parade also made its return among fanfare and celebration.

“It went amazingly well, this is the first Friday after a parade that I haven’t felt like pulling my hair out,” said Country Christmas Week President Carrie Ware with a laugh.

“Having enough volunteers just really reduced the stress. The lineup worked really well, everyone found their spots. Everyone in the parade was cheering and cheerful, and just glad to have the parade back.”

Following Friday night’s parade, photo opportunities with Santa were held at Merritt Civic Centre. The Civic Centre also hosted a craft fair on Friday and Saturday, featuring a number of local and visiting artisans. On Sunday, Saint Nick served up pancakes and other breakfast staples during the Knights of Columbus and Grad Class of 2023 Breakfast with Santa. The funds raised by the breakfast went to support the graduating class. Santa hit the aquatic centre for a Splash Down with Santa event featuring crafts and activities, before jetting back to the North Pole to prepare for his big day.

All the Country Christmas Week events this year were well attended, well received, and did not disappoint after a two year hiatus. The 2020 Country Christmas Week was canceled due to the COVID-19 pandemic restrictions in place at the time, with the following year’s comeback plans squashed by the flooding event on November 15, 2021. Organizers were thrilled to be back this year.

“I heard everything went very well with all of the other events,” added Ware.

“I’m glad that we were able to move the tree event to Tuesday and that we didn’t have something planned that day already, with everything that was going on the day before. It was a great week, all the events went with very little hassle, and there were no problems with the parade.”