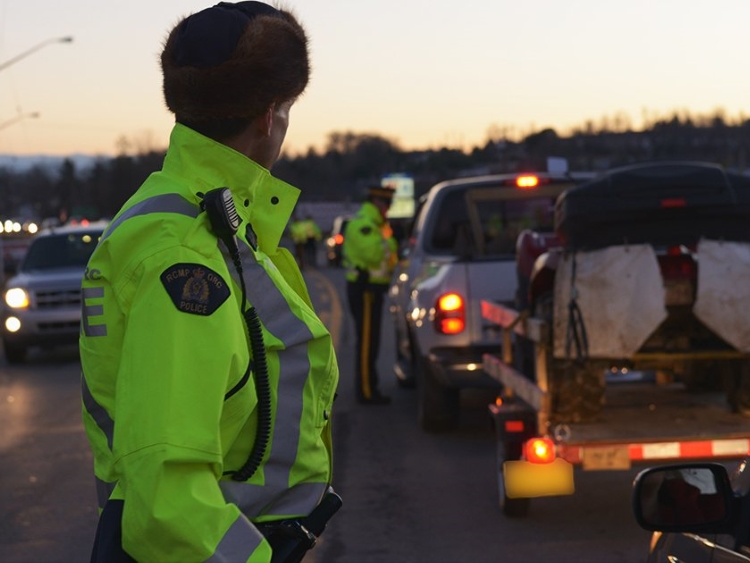 Local RCMP have increased targeted counter attack enforcements and officers are hitting roads, looking for drivers impaired by both alcohol and drugs. (RCMP)

Police will be ramping up enforcement beginning this Canada Day long weekend, looking for impaired drivers at CounterAttack roadchecks set up throughout the province.

ICBC and police are asking drivers to plan ahead to get home safely if their summer activities involve alcohol.

“Police across B.C. fully support ICBC’s Summer CounterAttack campaign and we will be out in force to deter impaired driving,” said Chief Superintendent Holly Turton, Co-Chair of the B.C. Association of Chiefs of Police Traffic Safety Committee and Officer in Charge of the BC Highway Patrol.

“We will utilize mandatory alcohol screening, Standardized Field Sobriety Testing and Drug Recognition Experts to identify and remove alcohol and drug-affected drivers from our roads. Police in B.C. work closely with our road safety partners to make our highways safer.”

Every year on average, 65 people are killed in crashes involving impaired driving, with 40 per cent of those fatalities occurring during summer months alone.

In the Southern Interior, 24 people are killed and 360 injured in 600 impaired driving related crashes, every year, with 27 people are injured in 120 crashes on Canada Day.

“Most people get the message that driving after drinking or consuming drugs is dangerous,” said Minister of Public Safety Mike Farnworth.

“Unfortunately, there are still those willing to take a chance with their own lives, the lives of their passengers and the lives of other road users. This impaired driving campaign is an important tool that helps educate and protect British Columbians.”

ICBC urges people to avoid driving if they plan to drink. It is recommended to assign a designated driver or find alternative modes of transportation such as public transit, rideshare, or taxis.

“We all have a role to play in keeping the roads safe this summer, and it starts with making a plan to get home safely,” said Lindsay Matthews, ICBC’s vice-president customer experience & public affairs.

“There’s no excuse to drink and drive. If your summer activities involve alcohol, always use a designated driver, call a taxi or rideshare, or take transit.”