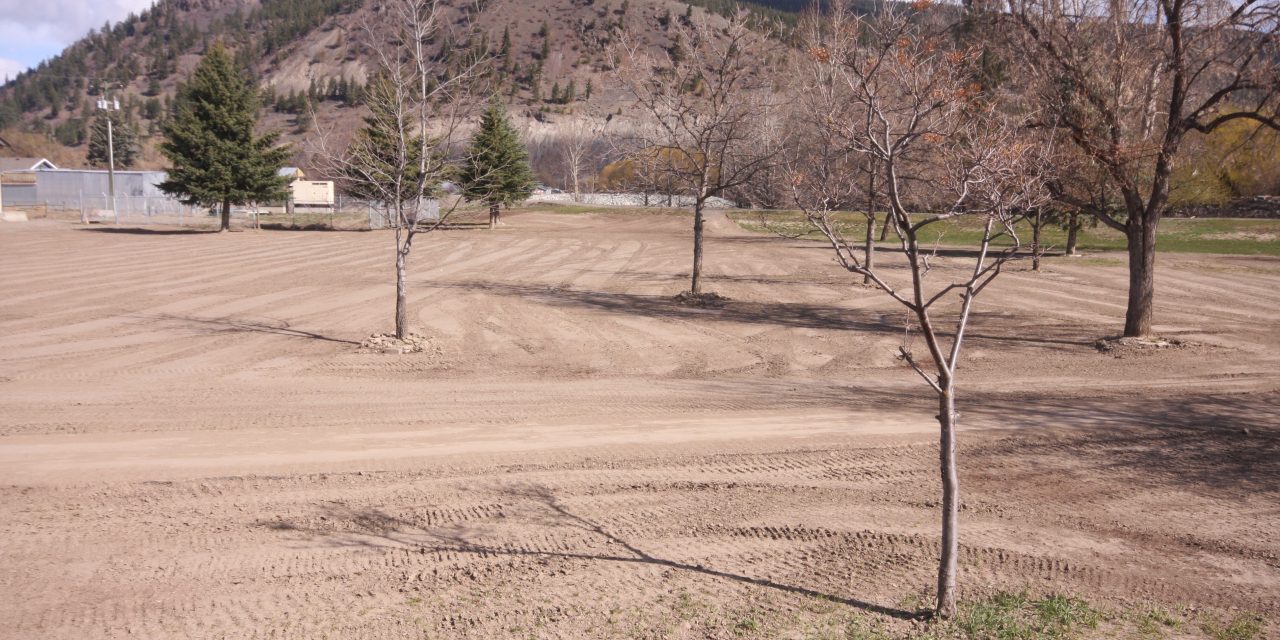 Deposits of sediment cover Centennial Park, with dust being a main concern for those living in the area. Photo/Marius Auer

With increasing temperatures and debris from November’s flooding creating high concentrations of dust, the City of Merritt, along with the Ministry of Environment and Climate Change Strategy and Interior Health has issued an information bulletin addressing Merrittonians concerns.

The main public health concern for some areas of Merritt is an increase in atmospheric concentration of coarse particulate matter. While flood recovery and clean up efforts are ongoing, sediments deposited by the flood could be disturbed, especially where active clean up is occurring or down-wind of areas of exposed soils. Increased blasting operations at the Collettville quarry have exacerbated these issues for some residents, prompting them to raise their concerns with the City.

Collettville resident Liz Moore expressed concern over the quality of life for those in Phase 4, one of the City’s most heavily flood damaged areas.

“Where we live in Phase 4, the river left behind shocking amounts of mud. It got absolutely everywhere; and once the waters receded and dried up, the silt that remained became its own problem. The city has removed a lot, but there’s just so much of it. Vehicles (especially large industrial traffic) kicks it into dust clouds I’ve watched linger 100 feet above our street. Then it swirls down, onto our properties and into our homes. I’ve developed an allergic response that makes it difficult to breathe; and I’ve been told I may need to keep my house sealed tight all through this spring and summer if I want to keep out the dirt clouds. It’s seriously impacting our quality of life. We’re lucky to be home; but nothing is normal anymore, and it feels like it won’t be for a long time,” said Moore, speaking of her experience living amongst cleanup efforts in the flood inundation zone.

The City of Merritt says it is aware of concerns around increased dust, including particulate matter caused by both flood clean up and rock blasting, and hopes to limit concerns by continually monitoring this dynamic situation and releasing their joint information bulletin.

“It’s one of the effects when they’re done blasting, that can create dust. When rock is being sifted off the top, that has created some pretty significant dust plumes as well, which have definitely been raised to us on a number of occasions as being something people are worried about,” said Sean Smith, Chief Administrative Officer for the City of Merritt.

Research has shown that both long and short-term exposure to particulate matter can lead to hospitalization and the worsening of heart and lung disease, especially for those with chronic conditions. Individuals with conditions such as asthma, COPD, heart disease, COVID-19, as well as pregnant women, children, and older adults should be most vigilant of their exposure to airborne dust. A concentration of higher than 50 micrograms per cubic meter of particulates such as PM10 exceeds the provincial acceptable limit, and the City of Merritt is too close for comfort to that number.

“Right now, our most recent reading here is 24 micrograms per cubic meter, but what I want to highlight is that it depends on time of day and where you are, so despite the fact we’re under the objectives, which is great, we always want less dust in the air. I would like to see that number at five,” added Smith.??

The joint bulletin also gives Merrittonians tips to reduce their personal health risk, as well as product each other. Avoiding being near or upwind of areas where flood clean-up is ongoing, or where exposed soil or sediment may be, greatly reduces the risk of dust exposure. Common sense in the intensity of outdoor activities, wearing a mask and eye protection, as well as running an air particulate filter inside are mentioned. Merritt drivers are also advised to reduce their speed on roads that are being cleaned.

Those with chronic medical conditions should take steps to further protect themselves according to the bulletin, such as activating their personal care plan and staying indoors. Postponing strenuous physical activity is also recommended. Anyone experiencing symptoms such as continuing eye or throat irritation, shortness of breath, cough or wheezing, should follow the advice of their health care provider.