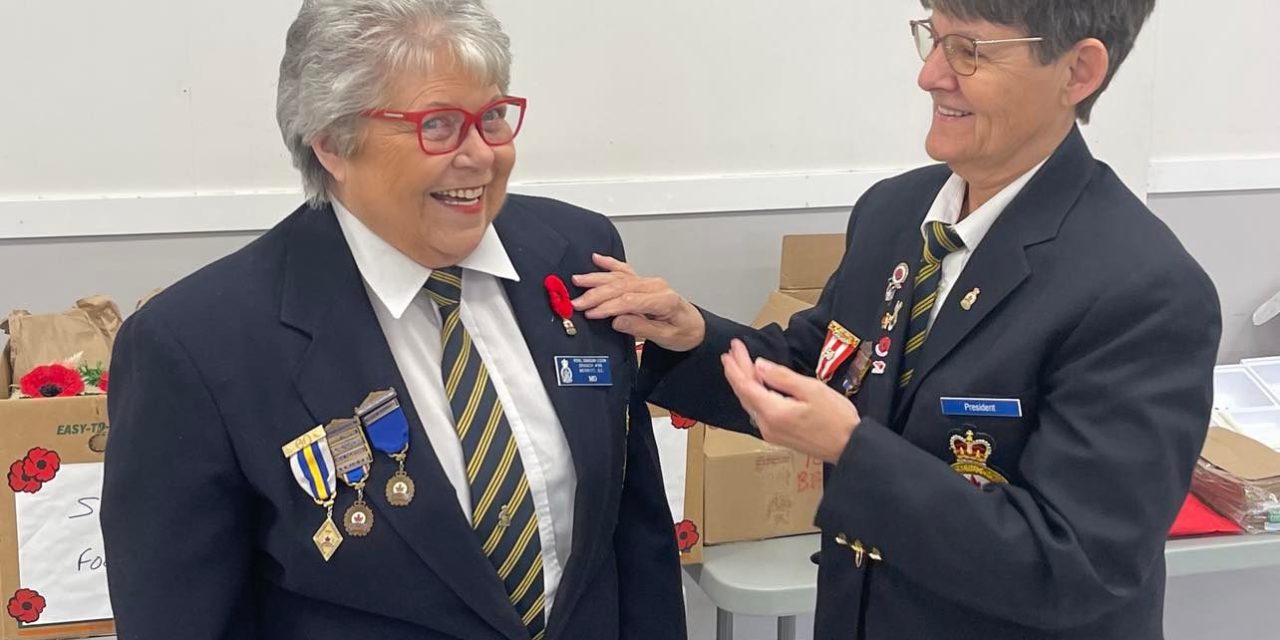 Merritt’s Royal Canadian Legion Branch 96 began its annual commemoration of Remembrance Day on Thursday, October 27, by presenting a lifetime Legion member with the honorary first poppy. The first poppy is given to a prominent member of the community to signify the start of the annual poppy campaign, which raises funds to provide financial assistance and resources for veterans.

Mo Dixon first joined the legion 47 years ago, and has dedicated her life to serving within the organization. Dixon is a well respected member of the community, and was chosen by Legion members as the recipient of this year’s first poppy. A small gathering was held at the Legion on Quilchena Avenue, where Dixon was presented the poppy by Legion President Arlene Johnston. She said it was an honour, and shared her motivation for joining the organization.

“I’m not a veteran, but I joined the Legion because my dad was a veteran,” said Dixon.

“I got to meet so many of his compatriots, but they’re all gone now. That’s the sad part. I visit them every year, I go up to the cemetery, and they are there. And I have a memory with each and every one of them.”

Along with her annual visit to veteran’s gravestones, Dixon has been heavily involved with the Legion for nearly half a century. She served as President, organized fundraisers, coordinated Remembrance Day proceedings, and often visited schools to take part in their respective ceremonies. Dixon’s passion for the organization was evident while receiving the 2022 first poppy, clearly moved by the honour.

Dixon described herself as a proud Legion member, and doesn’t plan to slow down anytime soon. She plans to be with the Legion for a long time to come, and is once again involved in this year’s poppy campaign and Remembrance Day proceedings. Dixon added that the Legion fills a gap in services and support for veterans, a fact that has been clear to her since day one.

“Even in those days we could see what the Legion was trying to do for the veterans, and they were really fresh out of service. In those days, they were shell shocked. It was so sad, and there was no help for them,” added Dixon.

“I thank everybody for supporting the Royal Canadian Legion. There are a lot of avenues that the Legion supports. Every single dollar that goes into the Poppy Fund comes back out of that fund, it doesn’t go into the general coffers.”

Funds raised by the sale of poppies and accessories go into a Poppy Trust Fund, administered by the Legion. Use of the trust funds are strictly controlled, with stringent approval processes in place. The Legion branch executive is accountable for Poppy Trust Fund expenditures, and the local executive is happy to take on that task. Recently, the local Legion donated $5000 from the fund to the Nicola Valley First Nation Veterans (NVFNV) monument project in Shulus.