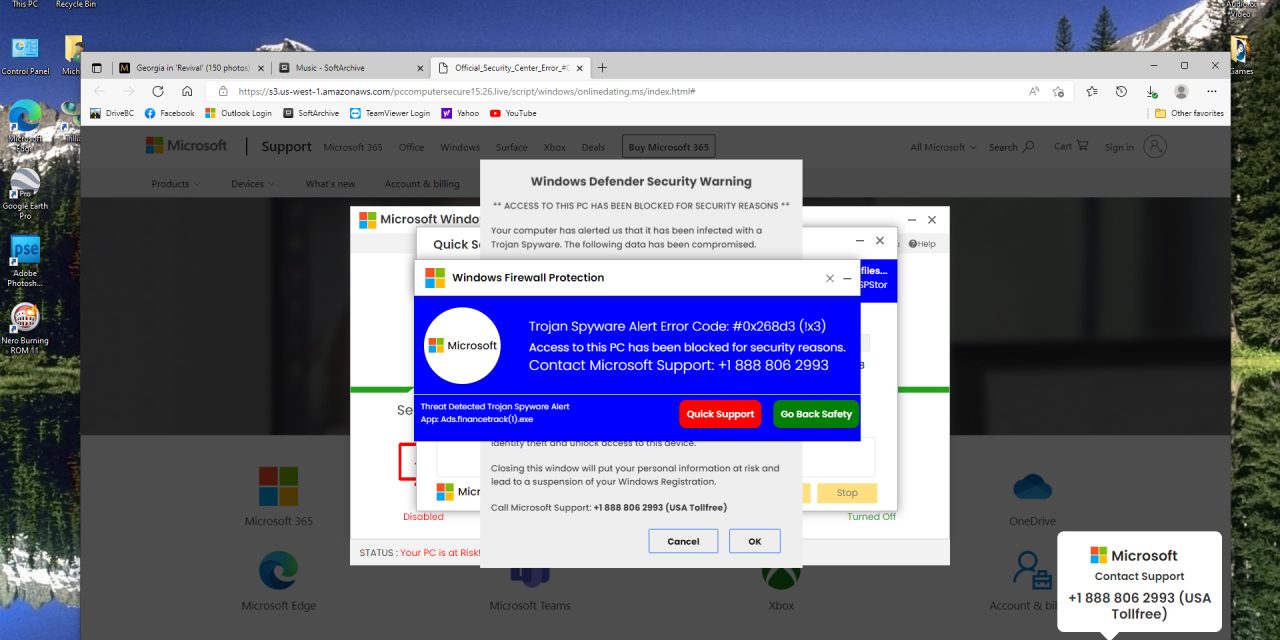 Screenshot sample of an internet scam. Do not contact number shown in the pop-up window. Photo/Michael Hall

It is no secret that the Internet is now a big part of everyday life. The connectivity provides many users information about any conceivable topic. However, for how useful it is as a tool, the Internet is also an open platform for scammers to steal personal information or swindle users out of their money.

Unfortunately, the less tech and Internet savvy users in the Nicola Valley have been falling into traps laid out by scammers. A local computer tech service here in the Nicola Valley said that the recent rate of calls he has been receiving to deal with scamming cases have dramatically increased.

The Herald spoke with Michael Hall of Mike-Rochips Computers to discuss the rise of Internet scams in Merritt, what could be potential consequences and what to do when faced with malware ads and other sorts of Internet scams.

“Hackers get into the webpages and they will divert a hyperlink, which means when people after click on a link, intending to visit a specific page, they are instead taken to a webpage, set up by the hackers,” he explained.

“Let’s say you’re looking for a recipe webpage and you see one for chocolate chip cookies. When you click on that link, it would take you to a different page. The hackers have added a hidden link to that cookie link to make you go somewhere else.”

“Now a page will come up saying you have driver problems, malware, or viruses on your computer. Scammers can have this set up so the pop-up windows completely fills the screen and you are unable to see your taskbar or anything else so you can’t close it.”

Hall explained that in panic of the situation brought on by the diverted link, people often times will call the number that would usually be located on the pop-up windows.

“The page might also ask you to call Windows support or Microsoft support to help you fix this but it gives you the scammers’ contact. What they are really trying to do is to get access to data on your computer,” said Hall.

“It’s a scare tactic to get you to phone them and give them remote access into your computer. They do this by asking you to download a modified version of the program Ultraviewer. While pretending to be technical support, they give you a link and you download the software which installs things that you don’t even know is there.”

According to Hall scammers aim to take money from unsuspecting users in a variety of ways.

“Some are strictly looking to get into your banking and get credit card information off of your web browser. If they are not doing that, then they will sell you on a solution to a problem that doesn’t exist,” he explained.

“I’ve had one customer lose $2000, another got scammed for $3000, and one had his bank account cleaned out completely. One got sold a totally bogus software to the tune of $1500.”

Over the last few months, Hall observed the trend of scam cases he has been receiving shows seniors to be the most vulnerable victims.

“I’ve noticed lately that there’s been so much of it,” he said, “I’ve probably had 20 calls in the last week when normally I only get one or two per month. Most of them are seniors. They are the most vulnerable because they grew up at an age when these kinds of stuff didn’t happen so they think it’s real when they see it and they don’t question it.”

To warn users in Merritt, Hall has compiled a list of steps to take when facing a potential Internet scam:

Hall specializes on Microsoft computers but said that the same concept of these steps can be applied to Macs and other operating systems.