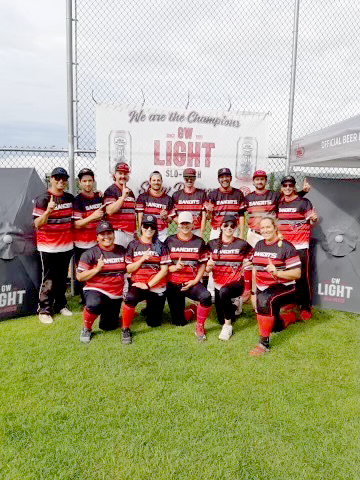 The Merritt Bandits took 1st place in the ‘Comp B’ category at the Kamloops Coed Softball Provincials in Kamloops, one of three Merritt teams competing. Photo/Clay Munro

Three local softball teams knocked it out of the park on Canada Day weekend, securing first place wins in their respective divisions during the 2022 Kamloops Coed Softball Provincials. The Merritt Bandits and the Merritt Land Pirates were ‘Comp B’ and ‘Coed Recreational’ champions, respectively.

The Merritt Outcasts wouldn’t be counted out either, securing the runner up position in the ‘Coed Recreational’ category. All three teams played 3 days of games at Kamloops’ Tournament Capital Ranch, vying for cash prizes and a shot at the World Series in Kamloops. The Bandits nabbed a spot in the World Series, as well as a spot in next year’s 2023 Men’s World Series in Hamilton, Ontario.

“I could not be more proud of the two young teams from Merritt making a name for themselves, and also my team, the Bandits. Six long years playing in comp and we finally got the win we’ve been waiting for,” said Clay Munro, coach of the Merritt Bandits.

“Now we’re on the road to the 2022 World Series in Kamloops on September long weekend. I hope to see more Merritt teams, we always love seeing our ball community spread their wings.”

Softball is a popular sport in the Nicola Valley, with Merrittonians often able to see games and tournaments taking place at Central Park’s baseball diamonds. Munro is the organizer of a tournament called Smashfest, which recently returned after a pandemic caused hiatus. While he organizes locally, in the larger scale tournaments he is a coach and player.

The National Softball Association (NSA) organized the provincials in Kamloops, and will plan and execute the World Series events as well. Munro says the organization has been great to work with, and he looks forward to taking his team to compete in future events.

“NSA are the best people to host events in Canada. We are proud to have such a great group of people come out of Merritt, and it’s great to see teams leave Merritt to make names for themselves. I love seeing it.”

The Merritt Bandits will now focus on practicing their game, competing in friendlies, and engaging the community for support. Currently sponsored by Murray GM, Emcon, and Procore, the local team is hoping to make it big. After the Kamloops World Series on September long weekend, the focus will shift to fundraising efforts for the 2023 Hamilton World Series.

“I’ll be looking for sponsors to help the team reach that goal of going to the big one in Ontario. Until then, we just love seeing fans and their support. The ones in town know who they are and the Bandits appreciate all they do to help us,” added Munro.

For more information on the World Series, or other softball events, visit www.nsacanada.ca.