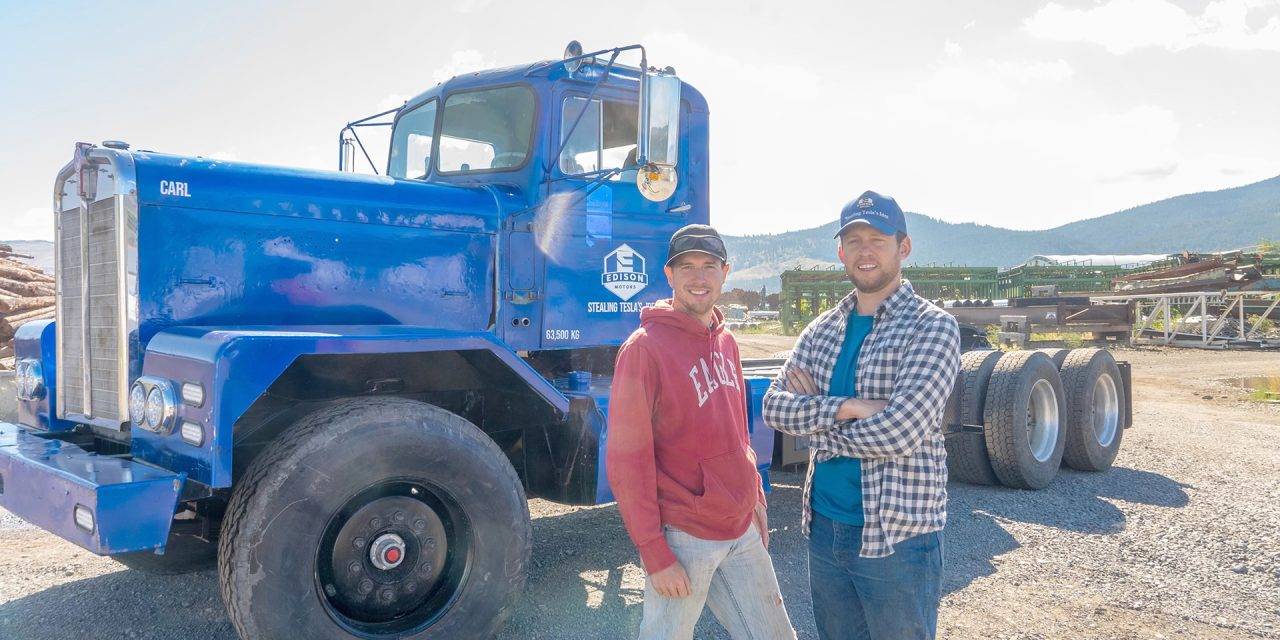 Two Merritt locals are going full speed ahead on their electric logging truck idea, with truck driver Chace Barber and power system engineer Eric Little teaming up to bring a new idea to life in an old-school way. The duo has been working as part of their joint venture, Edison Motors, to create diesel generator powered electric vehicles out of their local shop.

Barber and Little both have finance educational backgrounds, attending University for Economics and Accounting, respectively. Both soon discovered their passion for the mechanical and electrical trades, studying it in their spare time. Barber became a logging truck driver, listening to lectures on electric vehicles and other topics during his time spent on the road. Little has an affinity for the electrical aspect of their joint project, and is also CEO of Solar Energy Innovations, a local manufacturer of solar power equipment. Barber is CEO of Edison Motors, and sat down with the Herald to explain their electric logging truck project.

“It’s the same way that freight trains have been since the 1930s, so essentially what we did is build a freight train on wheels,” said Barber.

“It’s a diesel generator that powers the electric drivetrain. You can also plug it in and run it entirely as an EV. We figured it was easier to put in a 6000 pound generator than the 35,000 pounds in extra batteries you would need to meet the energy requirements of a logging truck.”

The prototype truck has made a few public appearances, standing out wherever it goes due to its electric blue colour. The drivetrain is custom built, hosting a number of large batteries in a robust frame. The cab is that of a 1962 Kenworth logging truck, which Barber added offers better value than entirely new construction. Edison Motors plans to offer ‘retrofit kits’ for existing logging trucks to be converted to use Edison’s hybrid system of a diesel generator and electric drivetrain.

Edison’s logging truck works similar to a locomotive engine, running a diesel generator only to charge a series of batteries that power the drivetrain. Barber said that the engine in the prototype truck only runs for about 25 minutes to charge up for roughly 2 hours of usage, depending on load size. While electric vehicles can cut transport costs in both long haul and off highway uses, Barber says he sees the technology best suited for use in the logging industry.

“I’ve been driving logging truck in Merritt forever, and I thought this made perfect sense for logging around here because you’re empty when you’re going up the hill to get the logs, and then you’re coming down the hill loaded. It has regenerative braking to hold you back, so instead of a normal engine break, it recharges your batteries,” added Barber.

“It doesn’t make a lot of sense to do electric for long haul, it’s incredibly reliable and has a lot of torque, which you need when you’re off highway. It makes the most sense to put reliable power into the industries that really need it.”

Barber’s social media accounts have garnered more than 1 million followers and close to 15 million likes, with his personal TikTok channel being the most popular. Barber and Little both make appearances on the account, showcasing the progress of their builds and other ongoing projects. A number of supply chain issues have slowed their builds, but production for their retrofit kits is slated to start this month.