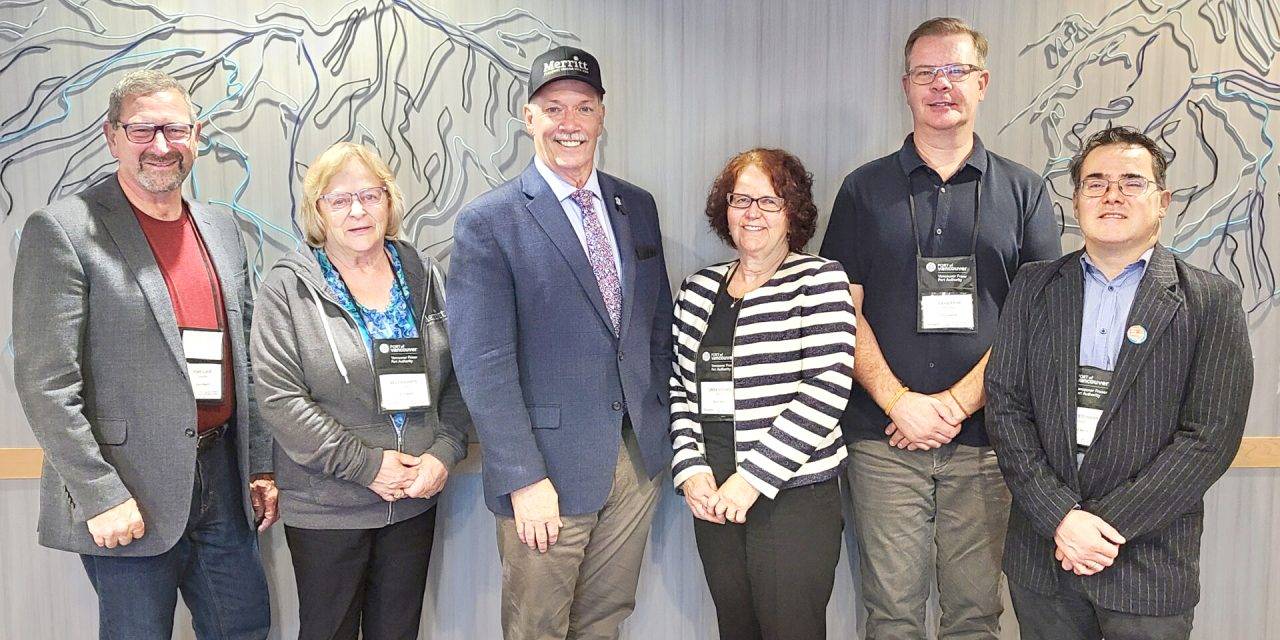 Delegates from the City of Merritt, including Mayor and Council, met with Premier John Horgan and other government officials at the Union of BC Municipalities conference. Photo/City of Merritt

Delegates representing the City of Merritt, including elected officials and staff, recently made a trip to Whistler, B.C. for the annual Union of BC Municipalities (UBCM) conference, which brings together municipalities from across BC to meet with each other and provincial levels of government to network and advocate.

The City of Merritt announced the trip in a press release, stating that the delegation was sent to lobby for provincial assistance and learn best practices from other attending municipalities in an effort to improve the quality of life for all Merritt residents. The annual UBCM convention is one of the main forums for municipalities to connect with the provincial government, and the City secured six meetings this time around.

“It went really well, and there were many things going on at the time,” said Mayor Linda Brown.

“We had a number of ministerial meetings, including Municipal Affairs to talk about the grant funding for our diking plan. It’s good to have Municipal Affairs, Nathan Cullen, on our side. He does a lot of promoting us and advocating.”

Brown said all the meetings went exceptionally well, and that she was pleased with their outcomes. City staff added that the City of Merritt is grateful to the Province for taking an interest in supporting Merrittonians and improving their quality of life. City of Merritt delegates met with Premier John Horgan for the third straight year, which staff called a demonstration of the province’s commitment to strengthening smaller BC communities.

“I think they were all listening. Our big issue is housing,” added Brown, who met with BC’s new Attorney General to discuss the issues.

“We’ve gone from about 11 homeless people pre-flood, to more than 70 homeless post-flood. He had the right people in the room, like BC Housing, and it was a good conversation where they understood our issue. We’re working towards a plan.”

Brown added that at this point it would be a waiting game to hear about any funding received as part of applications made for flooding recovery and diking efforts in the City. The Mayor gave a presentation as part of an insight panel on November’s flooding event during this year’s UBCM conference. The flooding, specifically recovering from it and preventing future occurrences, was a main topic of conversation with Premier John Horgan.

“When we met with the Premier, we talked about our diking. We know it’s not going to be provincially funded, but he’s more than willing to ensure that our diking needs get met. We’re looking for $265 million, so it’s a big chunk,” commented Brown.

For more information on the City of Merritt’s appearance at UBCM, including their resolutions to the provincial government, visit www.merritt.ca/ubcm.