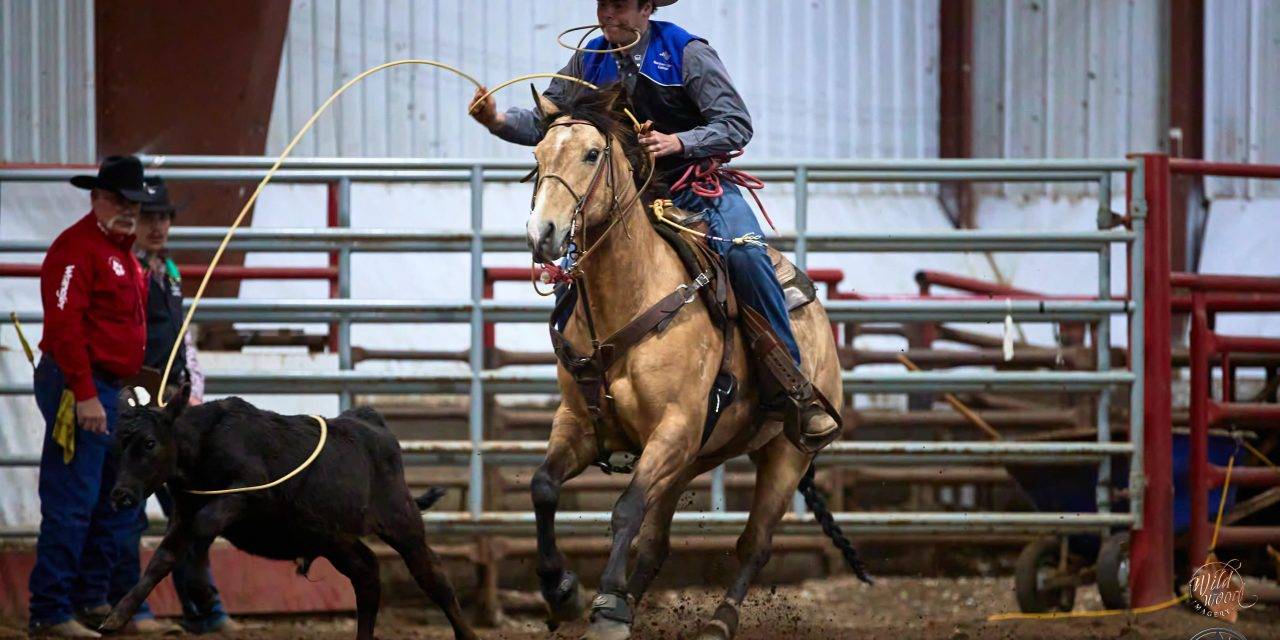 Local cowboy Bryce Garcia has earned himself a shiny new buckle after claiming the top spot in tie-down roping at the Canadian College Intercollegiate Finals (CCIF), a major championship title for a passionate rodeo contestant.

Being involved in rodeo for most of his life, the 19 year old local competed across Alberta to secure a spot in the finals, jumping from horseback to ground to tie down calves in a well rehearsed routine, eventually winning the national championship title at Brooks, Alberta in late May.

“We traveled all over Alberta and hit all the rodeos, and then finals went really well,” said Garcia. “It felt really good, all the hard work over the winter paid off.”

A varsity member of BC’s only rodeo team at Northern Lights College (NLC) in Dawson Creek, Garcia holds the sport near his heart. By competing in rodeo and bringing home titles, he hopes to raise awareness for what he says is a dwindling sport, especially among younger demographics.

“It’s good to have a positive outlook on rodeo, I feel like it’s kind of died down in Merritt. It feels good to bring that home and have people recognize that kids are still into it.”

Completing his carpentry apprenticeship at NLC, Garcia trained several times a week while living at a student farm dormitory, where his horse was stabled. He competes in both tie-down roping as well as team roping, wherein competitors work in pairs to tie the horns and legs of a steer.

The school is host to a unique sports team in its intercollegiate rodeo program. Students are supported both academically and within the sport itself. While college rodeo teams are common in the US, Canada has seen a slower rate of growth for the sport. Garcia says that his stay at NLC and the support of the program was invaluable.

“There was lots of support both education wise and rodeo wise. There were always people willing to help during and after class. In and out of the arena, they were really supportive.”

Garcia’s parents have supported his efforts from day one, and say his hard work and dedication to the sport made it a no-brainer to support his hopes and dreams within the sport.

“We couldn’t be more proud. Bryce started his interest in rodeo a little later than most . With a true passion for the sport he spent countless hours roping the dummy and in the practice pen. This dedication made it easy to support his dreams,” said April and Wade Garcia.

The local cowboy has a busy summer ahead of him, competing at rodeos across BC and continuing to pursue his love of rodeo and his passion for raising awareness for the sport amongst his age group. He added that a positive outlook and genuine hard work are his recipe for success.

“Just have a positive attitude and an open mind, and do the best you can.”