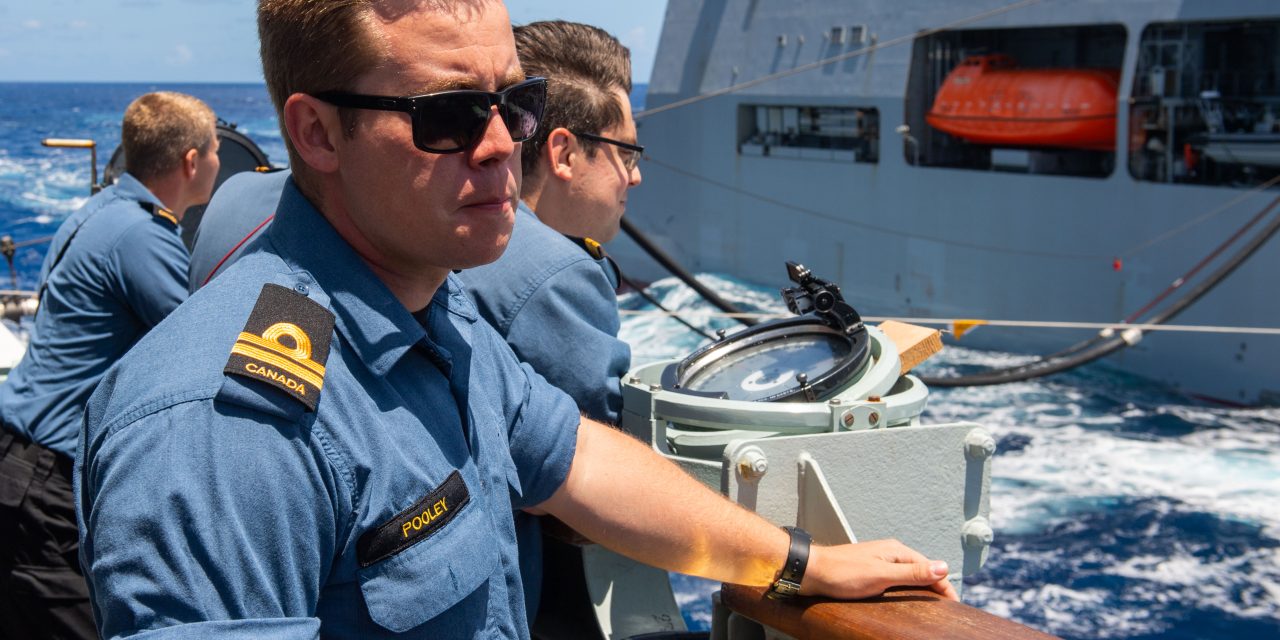 It is very amazing how someone’s journey could take them into places they wouldn’t have even imagined when they initially started out. Last year, the Herald had the opportunity to profile one half of the Pooley twins, Courtnay, who, with his brother Hayden, started out in our humble town of Merritt before becoming an officer for the Royal Canadian Navy.

This time, the Herald had the chance to speak with Hayden Pooley, who is out conducting various missions internationally, to discuss their story from his point of view. How did he choose the career of a Naval officer? What are the perks of his job? What challenges does he face? And what is next for him, in his journey?

Q: How did you decide to become part of the Canadian Navy?
A: “We’ve kind of talked about it in our family, that if you wrote a book on our lives and you were reading it now, you wouldn’t believe the story that is told from chapter to chapter. The Canadian Armed Forces have provided unbelievable opportunities for me, my brother, and our military spouses. I never imagined, when I started out, what life at sea would be like, what working with allies would be like, meeting people from other nations that have the same job as me. Coming from a small rural town, I didn’t know the world was so big.

Back then, I think there were recruiting videos playing in the movie theatre (Kamloops), and that peaked my brother’s interest more than my own. He started looking into it a little bit around 2009. He got the idea in his head that he wanted to be in the military. Honestly, at the time, I wanted to be a heavy duty mechanic but I also recognized the opportunity the Navy provided. We knew we’d be close to home, which was important to us. Being in the west coast was extremely important to making our decision.

We ended up applying, not knowing what was going to come out of it. We didn’t even apply as Naval officers, we applied as non-commissioned members at the beginning of Grade 12.

We received a call in April 2010, we were late for school that morning, our mom was yelling at us because we were going to be late, then suddenly the phone rings with the caller ID registered as Government of Canada. They asked for me first, offering me the position of weapons engineering technician, reporting to base that year. I accepted that offer and , funny enough, my brother was sitting beside me when the recruiter on the phone asked ‘is your brother there?’ He was offered the same position as me, and from there we left home and were together for most of our military experience up until 2016.

Q: Before joining the Navy, did you have any interest in the water at all?
A: “My parents enrolled us to sailing lessons at Nicola Lake. My dad has always been interested in boats and the idea of traveling the world on a boat has been one of his dreams. We used to talk about it, over campfires, the idea of navigating with stars, and how there are so many different ways to get around this world without the use of technology. We talked about traveling from the west coast of Canada to the Hawaiian islands, using only the stars and a sextant. That’s what has been on my mind while on this ship, waiting to become a fleet navigating officer, where I will learn to do that exact thing.

Q: What challenges do you face with life out at sea?
A: “Being away for long periods of time is hard on people. The Navy has been actively working to improve connectivity with families back home. We have wifi systems where we could connect our phones, make data calls, send pictures, and videos. Me and my wife usually send voicemails to each other. At the end of our day, we’ll take a couple of minutes to summarize our day, ask how each other is doing, and say that we love each other. Since she is on a different schedule, we rarely work at different times, so once we receive the voicemails, we would reply an hour later. It really requires creativity for me to maintain connection with loved ones, halfway across the world.”

Q: Do you still keep tabs on Merritt? What can you say about the recent devastation that your hometown has gone through?
A: “It was really hard, seeing all that and seeing the CAF helping in different areas while I wanted to go myself, but I have my own responsibilities here. I haven’t been home to see the impact of it but I’ve seen some pictures and it comes up in conversations a lot. It’s a terrible thing and I hope everyone is recovering well and that everything could eventually come back to normal.

There’s a lot of places in the world that I’ve got to see that I wouldn’t ever have imagined. Most of it couldn’t have been done without the support of my family back home, the support of our town, legion, our old high school, and a bunch of people we know throughout the city of Merritt.”

Q: What do you love about your job?
A: “The thing I like most about my work is the people that I work with. I have a very excellent team that works really well together. We have a very respectful and polite workplace that consist of a really good group of people. It’s what I love in the military in general, it’s the friendships that you make, they last for a lifetime and it’s just a unique type of camaraderie that is hard to explain. I met my wife coming up in the Navy and I’m very happy that I did.

On a personal level, this job is challenging which provides me a lot of satisfaction. I’ve navigated through different places in the world, such as Pearl Harbour and Golden Gate Bridge.
I enjoy my Bridgewatch Keeping job. It’s extremely challenging and rewarding. It is definitely a high stress job but when you do it well, it gives you a very rewarding feeling especially because it is in service of Canada and is done in a very professional manner.”

Q: What is the next step in your career?
A: “Once you become a Bridgewatch Keeper, your next responsibility is becoming a director of different sections throughout the ship. Since we get to choose, I am electing to become a fleet navigating officer where I will be responsible for all the navigation in and out of harbours, through constrained waters, managing fuel, ensuring that we arrive on time, and that we operate safely. The position also plans deployments (Where we’re going to go? How are we going to get there?), and is also responsible for high risk activities such as replenishment at sea and towing.

Fleet navigating officers receive very extensive training, done in Victora. We progress with our navigation duties throughout the whole course, working our way up to navigating at very high speeds, in very constrained waters, with limited navigational equipment.”

Pooley is the Bridgewatch Keeper for the ship, HMCS Vancouver. He is currently out in the Hawaiian area, performing exercises with allied Naval Forces of the Pacific Rim. Once finished, he will quickly switch gears and head to the Indo-Asia Pacific area with HMCS Winnipeg for Operation Projection, on August 14. There, the Navy will demonstrate’s Canada’s support of allies in the area.

After Projection, Pooley will be focusing on Operation Neon where Canada’s forces are participating in the imposition of United Nation sanctions against North Korea. He is expected to return home in December.