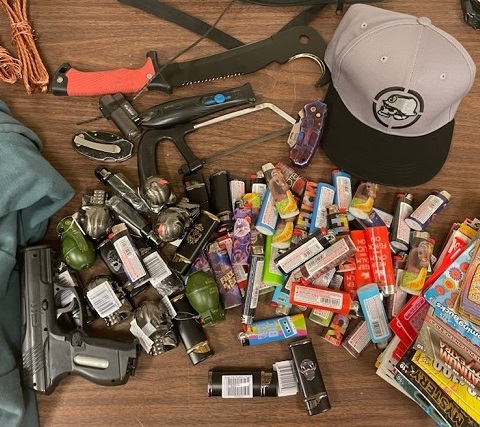 Two armed robbery suspects have been captured, one facing a charge and remaining in custody, while the other has been released on conditions. Photo/Merritt RCMP

Two armed robbery suspects, accused of robbing a gas station in the 2300 block of Nicola Avenue and assaulting the clerk, have been identified and apprehended by Merritt RCMP Frontline Officers.

On June 16, the Merritt RCMP responded to a local gas station, where it is alleged that two individuals brandishing handguns robbed the store before assaulting a clerk. Both individuals fled, with officers calling in police service dogs to track them down. One suspect was caught by the police dog and found to be in possession of an air pistol, a long serrated knife with a gut hook, and what is believed to be stolen merchandise from the store.

“The suspect was held and then released on conditions at the request of Crown Counsel,” said Sgt. Josh Roda in a release by the Merritt RCMP.

“Through further investigation police identified the alleged second suspect as Mr. Timothy James Molnar. On June 17, Mr. Molnar was located and arrested by police. He was found to be in possession of an air pistol and what is believed to be more stolen merchandise from the robbery.”

Molnar was charged with robbery on June 18, and was held in custody awaiting a court date on June 28 at the Kamloops Law Courts.

Anyone with information relating to this incident that has not yet spoken to police is asked to call the Merritt RCMP at 250-378-4262.