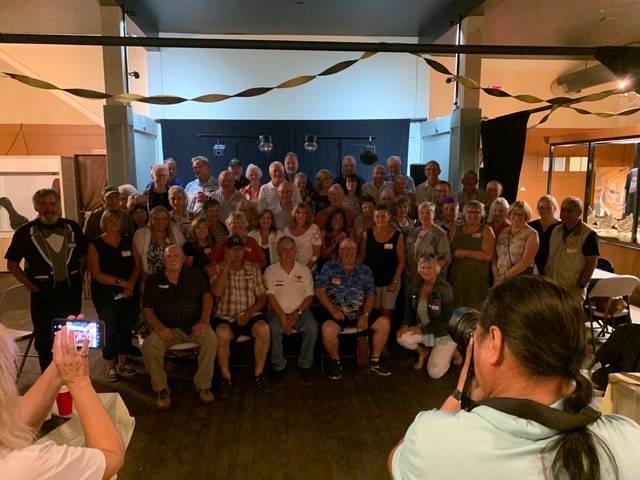 Reunion attendees pose for a photo at their Saturday night banquet dinner, this year taking place at the Canadian Country Music Hall of Honour on Quilchena Avenue. Photo/Susan Roline

Alumni of Merritt Secondary School (MSS) reunited with their former classmates for a weekend of fun, laughs, and a trip down memory lane. Those who attended and/or graduated from MSS in the 1950s, 60s, and 70s were welcome to participate in the festivities, and over 100 former Panthers gathered to mark the occasion on the weekend of July 15 and 16.

Last taking place almost a decade ago, the ‘Friends of the 50’s, 60’s and 70’s’ reunion sought to reconvene on a more frequent basis. However, as organizer, Susan Roline explained, there have been recent challenges in making good on that initial plan.

“Our last one was in 2014, and at that point we planned to have another one in five years. That went by rather quickly, and brought us to 2019, which was the beginning of COVID.”

When asked about the event, Roline said she was very pleased, as “everybody had a fantastic time and were happy to meet up with old friends and acquaintances.”

Roline added that due to the pandemic, she saw former classmates for the first time in many years, despite their also living in the Valley. The highlight for her was reuniting with old friends and making a few new ones, too.

“I loved seeing old friends. I’ve always been quite a social person, so most of the people I’ve attended, I’ve known them in some capacity over my life. It was nice catching up and seeing them.”

Although turnout to this reunion was lower in terms of crowd size, that didn’t stop attendees from connecting with their former classmates and taking it all in. It was a busy weekend of social activities, taking place in various locations throughout the City of Merritt. A majority took place in the Canadian Country Music Hall of Honour, with ample room for all 110 attendees.

Photo albums from previous reunions, as well as yearbooks spanning many decades of MSS history, were on display for attendees to look back on their high school years. People came from near and far to take part in the event, even crossing oceans to see old friends.

“The furthest someone came was from Australia, and the furthest in Canada was from Prince Edward Island. We’ve got former classmates spread out all over the world, it’s interesting.”

While festivities would generally take place at the Merritt Civic Centre, lower turnout to this rendition of the reunion did not warrant the cost. Roline said the Hall of Honour was a more affordable option, and provided a warm and welcoming atmosphere for their meet and greet, as well as their banquet style dinner.

After enjoying their baron of beef dinner, made with local beef, and a strawberry shortcake dessert, the group gathered for a photo together. Reminiscent of class picture day, the group was happy to reunite once again and catch up with their fellow classmates. They plan to reunite again in another five years.