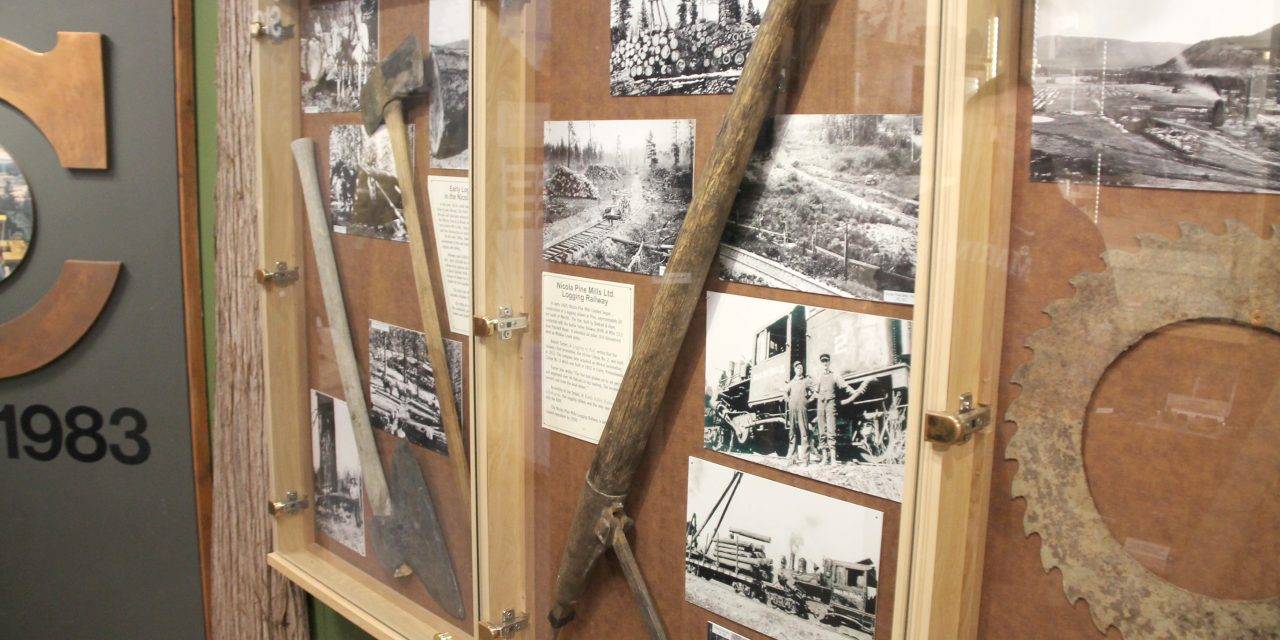 The Nicola Valley Museum & Archives is host to a plethora of information on the history of the Nicola Valley, including the forestry sector’s crucial involvement in the formation of the City of Merritt. Marius Auer/Herald

While the City of Merritt may be a small ranching community at heart, much of its growth can be attributed to the support and economic contributions of the forestry industry, according to the Nicola Valley Museum and Archives (NVMA). While it has long been common knowledge that Merritt sits on land rich with natural resources such as coal and copper, none of it would have been accessible without the help of the forestry industry.

While the forestry and logging industry has long been present in the Nicola Valley, it wouldn’t become the community staple it is today until the early 20th century. The NVMA has a variety of artefacts and exhibits relating to the impact of forestry on Merritt’s foundation. A long standing source of employment and economic growth, forestry was industrialized in the Valley near the turn of the century.

“Forestry arrived in the Valley around the same time that mining did,” said Cameron Bridge, manager of the NVMA.

“At first, there were predominantly small sawmills in the area, because they always needed some level of logging and wood production for construction. It wasn’t done on a massive industrial scale until the early 1900s, around the time that the railroad was built.”

A bustling system of mines, requiring a community to house workers and their families, led to the introduction of a railroad system through the Nicola Valley. Logs are, of course, essential in the production of both shelter and the rail based transportation system. A number of smaller local sawmills expanded their operations, and the newly formed City of Merritt had another industry under its belt. Logging has been a source of employment, economic growth, conservation, and culture in the Nicola Valley ever since.

Canford Mills, once of Merritt’s earliest and largest sawmill operations, was purchased by Henry Meeker from a holding company in 1919. The mill was the largest of its kind in BC’s Interior at the time it operated. The mill burned down in the 1920s, with the resulting fire being the province’s most costly in terms of property damage at the time. The mill was moved to another location in Merritt, commonly known as the former Tolko site, where its owner rebuilt the operation. While a loan taken out by Meeker and cosigned by the City of Merritt eventually bankrupted both parties in the 1930s, the community was eventually able to recover and continue regular logging business as the City began to grow.

“When you’re building a community, you need a lot of logs. Houses, offices, and other buildings all require wood. A lot of people came here to work in the mines and in logging, and eventually it became known that there was a decently sized logging industry in the area. This resulted in more demand for wood as a community was built,” added Bridge.

“Despite the bumps, it definitely did help spur a lot of early growth and jobs, and was one of the main sources of employment in the area. Forestry has been one of the main constants in the Valley, up until now, and almost as far back as ranching.”

For more information on the history of Merritt and the Nicola Valley, call the museum at 250-378-4145, or visit in person at 1675 Tutill Court. Their website is also available at www.nicolavalleymuseum.org.