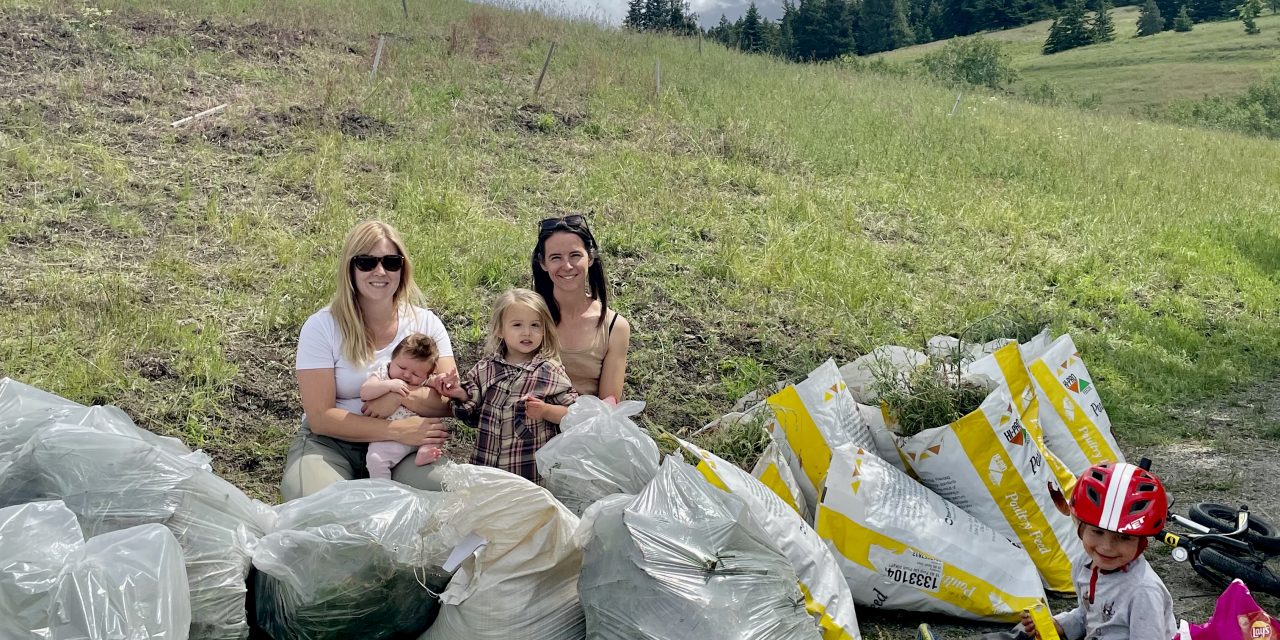 This year’s weed pull put on by the Merritt NatureKidsBC chapter may have had a lower turnout than normal, but members still pulled an impressive 262lbs of knapweed. Photo/Rachel Whitehouse

The local chapter of NatureKidsBC hosted its annual ‘Weed Pull’ event in an effort to preserve a rapidly disappearing ecosystem in the province. Managing to pull over 260 pounds of knapweed during their day at the Laurie Guichon Memorial Grasslands Interpretive Site, near Lundbom Lake, the small team of volunteers contributed towards reducing the invasive plant population in a sensitive area.

NatureKidsBC is an organization focused on educating children and families about conservation and the great outdoors. The local chapter is made up of co-leaders Rachel Whitehouse and Sarah Desrosiers and approximately 10 active family members. With this year allowing the return of the event, the club’s goal is to complete a challenge set out by the TNRD.

“This was our third year. We’ve registered for the Thompson Nicola Regional District’s Invasive Plant Committee’s weed pull challenge. They run that every year for organizations to win a $250 honorarium to their club for pulling the most weeds.”

They removed a significant number of invasive knapweed plants, bringing their entry’s weight to 262 pounds. Other animal and plant life in the area can suffer from the plant’s presence, especially in highly sensitive areas like grasslands. Their 262 pound number is an impressive feat for a team whose numbers were hindered by the pandemic.

“It was just myself and the other co-leader, and our families, unfortunately. Probably because it’s the first year people have been able to go out and do things,” said Whitehouse with a laugh.

“The weed pull is a really important event because less than one percent of B.C. is grassland ecosystem, and it’s one of our more endangered ecosystems. We’re losing it very heavily to invasion by weeds and development. Anybody we can get out to educate about the grasslands is great.”

Moving forward, the club will continue to host its regular events, as well as educate themselves and the community through a variety of mediums. Guest speakers, interactive exhibits, and exciting excursions are often part of regular club programming. The non-profit organization has a number of events coming up this summer.

“We run a different nature-themed event once a month throughout the year, and they’re generally on a Saturday. The last one we had was a learn-to-fish event. Our next event is on August 6, and we have the BC Wildlife Park coming to do a reptile event.”

To get involved with NatureKidsBC Merritt chapter, or for more information, contact merritt@naturekidsbc.ca.