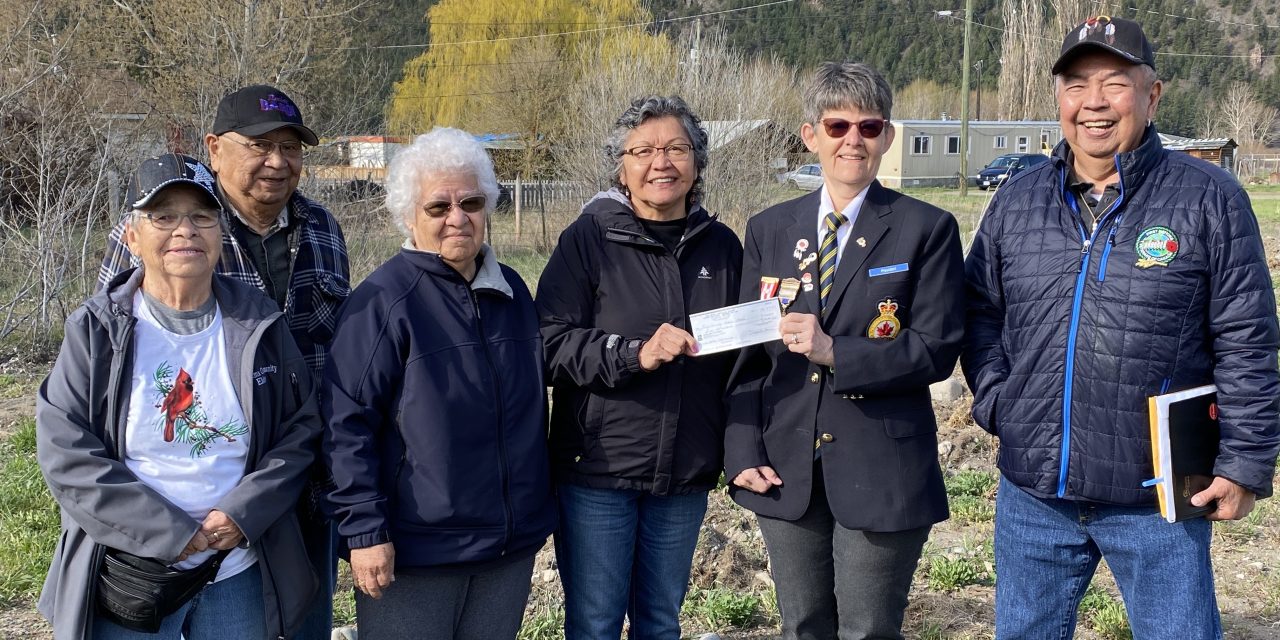 The Nicola Valley First Nations Veterans (NVFNV) have been working for 19 years to educate and engage local communities on the often unrecognized sacrifices made by First Nations veterans, and their new monument project hopes to commemorate those whose service went unacknowledged.

“We want recognition of our Nicola Valley First Nations veterans. Many of them volunteered at a young age, some of them weren’t even old enough to sign up, but they did it,” said Carol Holmes of Upper Nicola Band, member of NVFNV.

NVFNV’s new monument project looks to replace their current boulder monument, the creation of which heralded the inception of the community group. Made of granite, the new monument will be built on an acre of land in the Shulus community. It will be inscribed with the names of the local First Nations veterans who served, and the site will feature a ceremonial fire pit and benches.

The organization came to be in 2003, when veterans Percy Jackson of Shackan and Richard Jackson, Jr. of Lower Nicola Indian Band (LNIB) together recognized the need to honour and recognize the First Nations veterans of the Nicola Valley. The two searched for a large boulder, eventually finding one and moving it to Shulus where it became the organization’s first monument project. Four plaques were placed on the boulder, representing World War I, World War II, the Korean War, and the Vietnam War.

“We’re ensuring that the history of our First Nations veterans serving and supporting our country is known by all Canadians, and by other settlers too,” added Holmes.

The NVFNV have taken on projects to advance this goal in the past, such as their collaboration with the Last Post Fund’s Indigenous Veterans Initiative. Funding through this initiative has allowed Holmes and her fellow members to place over 20 military markers honouring Indigenous veterans.

“We want to continue the legacy of our veterans in our communities and in our families, making sure our children and grandchildren know the history of the people that served. We have quite a number of families that information hasn’t been passed on. Part of this project is collecting those stories. We’d like to put them into a book too.”

The veterans hope to continue collecting and disseminating these local stories of bravery and courage in serving the country, with many local First Nations serving throughout the country’s history. At least two First Nations veterans residing in the valley have been killed in action. Those who did return were often mistreated, and given far less support and recognition than their non-Indigenous counterparts, if any.

Education is a key component of the NVFNV’s mission, often coordinating veterans to attend local schools and institutions, as well as being involved in the Nicola Valley’s annual Remembrance Day ceremonies. Moving forward, they hope to continue raising awareness, as well as funds for their new monument.

“We take Visa, Mastercard, debit, pennies,” joked Richard Jackson Jr, member of the NVFNV. “Come to our information meeting on the 18th, 6pm at the Shulus Arbor, it will be a great event.”

In addition to raising funds for the project through local initiatives such as these, the NVFNV have received $50,000 in funding from Veterans Affairs Canada, but they still remain short of the total estimated project cost of $127,000. During their April 22 meeting, the veterans received $5000 towards the project from Merritt’s Legion.

“There is still a real disconnect between First Nations veterans and how they work with the Legion and how we can assist. The veterans came back and it was you’re over here, and you’re over there. So bringing us together and letting people know what the Legion does and how we can support veterans. That’s not been there,” said Arlene Johnston, president of Merritt’s Royal Canadian Legion Branch 96.

“This is really important. It’s the first chance in the six years that I’ve been involved with the Legion that we’ve had to come together.”

Those looking to support the project can share their own or family’s stories of serving, attend the information events, and donate to the monument’s progress through the LNIB office, with a notation it is for the Nicola Valley First Nations Veterans.