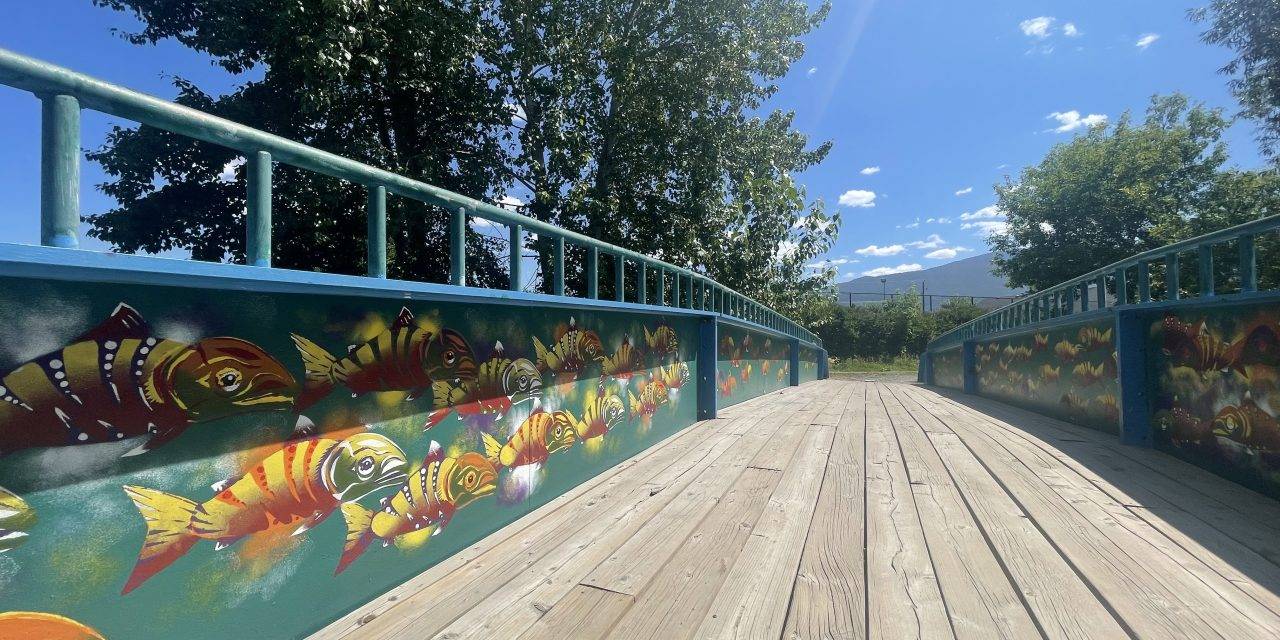 One of the NVAC’s new murals is already underway and ready for Merrittonians to take a peek at, with the Lions Memorial Bridge getting a refresh by a local Indigenous artist, Leonard George. Marius Auer/Herald

The Nicola Valley Arts Council (NVAC) is moving ahead with their new mural and beautification project, having received the green light from Merritt City Council at its July 19 regular meeting. With interactive murals and other art pieces coming to six new locations, local artists and art enthusiasts alike are sure to be kept busy this summer.

Council agreed to pass the proposed murals with a 4-2 vote, meaning the new project can move forward. While it is still subject to final approval by City staff, the NVAC is busy planning and getting to work. The local arts organization said it’s excited to get people involved in the arts.

“We want people to be able to take part in it, and have more photo opportunities,” said Mischelle Pierce, president of the NVAC.

“At Rotary Park, they’ve given us permission to do some interactive sidewalk games. Not just hopscotch, but some fun things that people walking through can participate in. We’re really excited about that, because we weren’t sure if the City would go for it. It’s almost more a beautification project than it is a mural project. When people think of murals, they think of big murals about country music.”

While the City did end up supporting the project, the NVAC said one staff member in particular was key in helping the group present their idea to council. Don McArthur, Director of Planning and Development Services for the City, has been supportive of the new initiative since the project’s inception.

“Don McArthur, who was instrumental in getting a whole bunch of sidewalk murals and interactive things, got us involved with the City a couple of years ago,” Pierce said.

“With the smoke, the heat, and everything that’s been going on it was put on the back burner the past few summers. We’re really excited to get going this summer.”

Pierce added that her favourite part of the new project is the interactive nature of the installation, allowing for deeper appreciation and higher traffic around the pieces.

The NVAC is dedicated to promoting the arts and the value they bring to the community. They have hosted multiple events and art gallery shows throughout the year. Their mobile gallery can be seen at street and farmer’s markets, engaging locals and offering informational and instructional advice on the arts.

Local Indigenous artist, Leonard George, has been painting the Lions Memorial Park pedestrian bridge for the past few weeks, adding brightly coloured depictions of salmon along the inside of the walkway. Pierce said the response to George’s artwork is spectacular, as locals and tourists stop to admire the local murals. Many other local artists are planning to contribute their ideas and designs toward the new mural and beautification project. Merritonians are also welcomed, and encouraged, to submit their ideas for the planned small-scale murals throughout downtown.

The following are the sites of the larger scale murals:

“A lot of these aren’t going to be the sort of murals that people in Merritt are used to, like the ones that take up the whole side of a building,” added Pierce.

“These will be smaller projects, maybe even something humorous like a brick on a building where there’s a little mouse coming out of a door.”

Those who wish to submit their ideas are invited to stop by the Nicola Valley Arts Centre, on the corner of Voght and Nicola. For more information, please contact 250-378-6515.