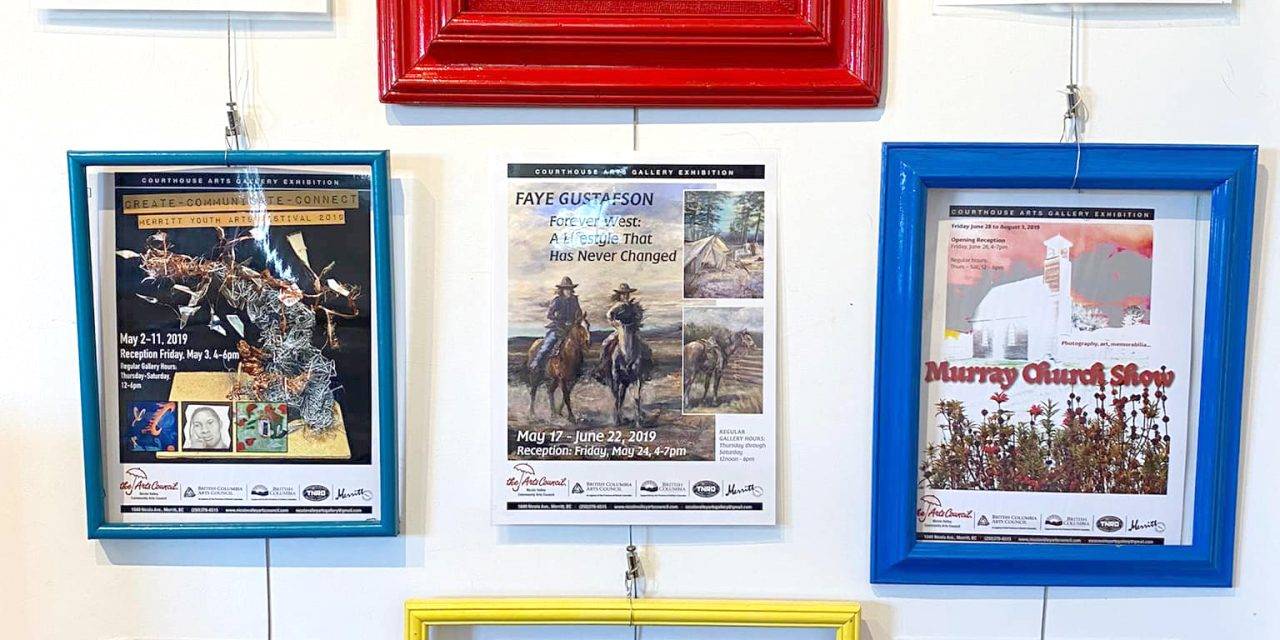 The Show of Shows, a Nicola Valley Arts Council exhibition made up of posters promoting previous shows, was curated by Jano Howarth. Photo/NVAC

The Nicola Valley Arts Council’s (NVAC) latest show is a walk down memory lane, showcasing 55 posters designed by a local artist, with the posters promoting previous shows at the art gallery since 2017. Locals are encouraged to visit the gallery, located in the Nicola Valley Arts Centre at the corner of Voght and Nicola, and reminisce over their favourite shows in recent years.

The show was organized by Jano Howarth, the NVAC’s gallery director, who curated all of the shows represented on the originally designed posters, currently on display at the gallery. The posters were designed throughout the past five years by Kim Leclair, a local artist and publisher of the Merritt Morning Market. Howarth says the idea for the show has been on her mind for some time.

“We have over 55 posters, done by Kim Leclair, that were promotions for each of the shows I’ve put on since May of 2017,” said Howarth.

“For me, it’s definitely a trip down memory lane collecting all these posters. I’ve always wanted to do a show of Kim’s posters, because she’s been involved in the arts council, and getting Merritt an art gallery, since 2005.”

Howarth added that while the ‘Show of Shows’ displays the poster for every show she has curated, Leclair has been making and designing posters for the organization since the mid 2000s. The show also describes the creative process behind the posters, including the collaboration between Howarth and Leclair to create a poster that captures the essence of the shows.

The name, ‘Show of Shows,’ comes from another local artist involved in the arts council who thought it accurately portrayed the goal of the show. Leonard George, a painter, suggested the name while Howarth was developing the show. She says the names of her shows often come from conversations with artists involved in the arts council and those visiting the gallery. The show is heavily influenced by and focused on local artists.

“Being here, and showing the art to people when they come in, there are so many stories. I’m feeling really good about it, because only two out of 55 shows that I’ve done have featured artists from out of town,” added Howarth.

“We’re drawing in different parts of the community that have different types of creativity. One of the shows that I love was a shoe show, and it drew people out in the community who have shoe collections. You would never know what’s going on in the community, it was so much fun.”

Howarth says that while it’s hard to pick a favourite, she is fond of the poster promoting the NVAC’s show following the fire that burnt down the original Murray Church. She says the poster is touching, and appreciates the design Leclair created. Locals are encouraged to visit the show, on until September 11, 2022, at the Nicola Valley Arts Gallery. For more information, such as opening times, visit www.nicolavalleyarts.com.