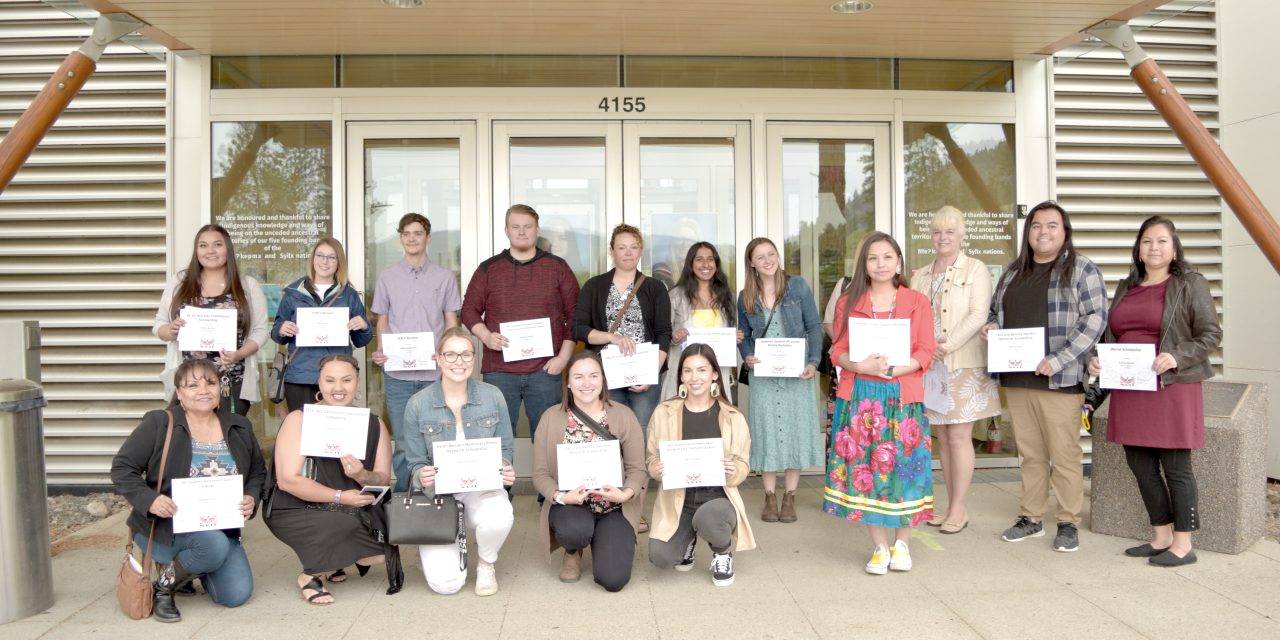 Awardees pose in front of the campus entrance for a group photo after the ceremony. Izaiah Reyes/Herald

When it rains, it pours, and for select students at the Nicola Valley Institute of Technology, the recent awards ceremony poured in approximately $25,000 in scholarships and bursaries.

The school hosted its awards ceremony on June 9 2022 at the Lecture Theatre of its Merritt Campus. This was the first time the post-secondary institution had an in person student awards ceremony in two years.

“This is going to be our very first, in-person awards and graduation ceremony in a couple of years so we’re pretty excited to actually see our students in person,” said Hilary Thomas, associate registrar of NVIT.

“Some of our students will have spent the majority of their two year diploma online. To be able to reach this point in their studies and actually meet in person and celebrate them altogether as a community makes it even more important because they have not had that from us at all yet.”

The enrollment services team organizes the ceremonies and being the first one in a while, the team happily familiarized themselves with the process again.

“We definitely had to blow off our dust in terms of organizing our in-person event,” said Thomas.

“We had to take some COVID precautions in some respect. Usually we have a big dinner for our grads but when we were planning we weren’t quite sure where restrictions were going to end up come June, so we have food trucks for the graduation ceremony and we also have sandwiches ready to go for our awards ceremony.”

The ceremony began at 11 am with awardees being welcomed at the ceremony with hand drumming led by Willard Wallace. Amanda Street, the emcee of the event, then introduced Elder, Amelia Washington, who offered up a prayer for the students. Sue Sterling-Bur, Vice President of Students, then proceeded with her opening remarks.

“This is such an important day because it really does honour and celebrate our students who have put in 100 percent effort, have excelled in their cohorts, and have really gone that extra mile not only for themselves, but also being role models for their peers and cohorts,” said Sterling-Bur in her opening speech.

NVIT initially hoped to hold the ceremony outdoors at their new ampitheatre but, unfortunately, a rainy forecast had caused a change of plans.
Approximately $25,000 worth in grants and scholarships were awarded to 22 students. These awards vary from in-house NVIT awards to community sponsored awards.

The following is a list of sponsors with corresponding award presenters;

“What we used to do is host a ceremony that encompassed entrance awards for people coming to NVIT with scholarships as well as including these academic excellence awards,” said Thomas.

“We found that students that graduated in the summer were not necessarily still in town for the ceremony as it was held around September. So now we’re taking all of our academic excellence awards and having it a day before our graduation when they’re still in town to accept these awards at this special ceremony and celebrate their academic achievements.”

“I’m just thankful and grateful for all the learning and healing experiences I’ve had in the indigenous service program and all of the beautiful people and the support system that have encouraged to have this award happen,” said Governor General Bronze Medallion Recepient, Ayme-Jo Desmond.
Desmond attributes her success in large part to her support system, including tutors Glen Krajci and Heather Perry.

“I look forward to using my education in the field to help those in need.”

Students interested in applying for next year’s awards are encouraged to reach out to the registrars office to learn more about the application process.