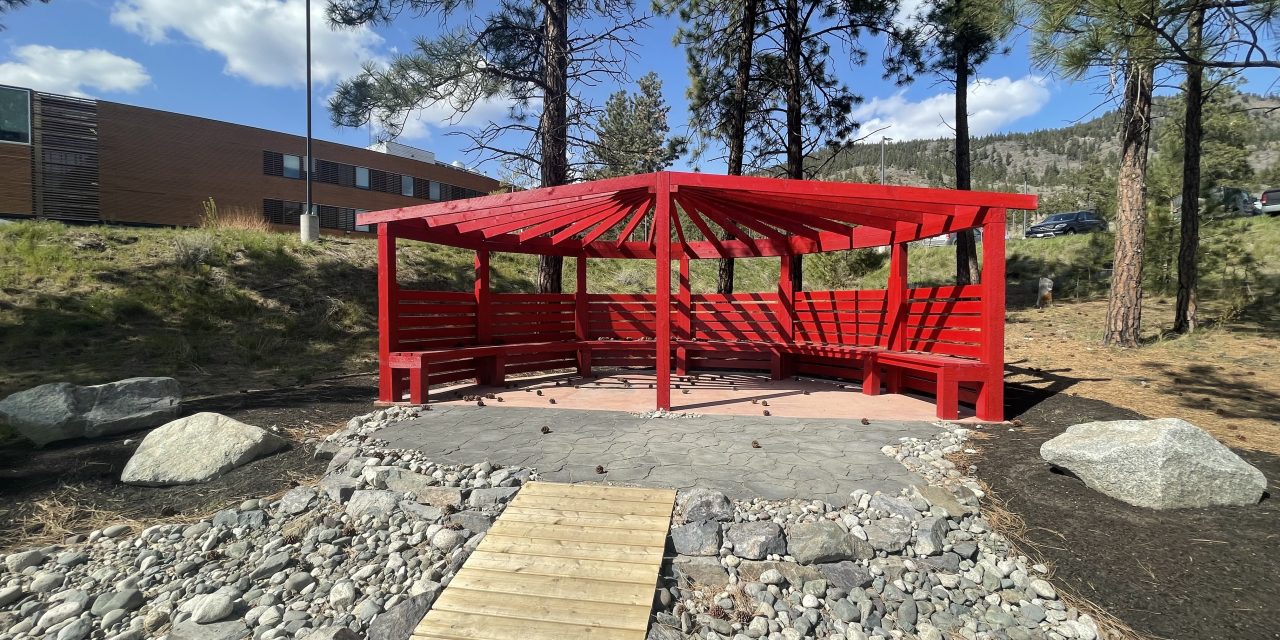 NVIT’s MMIWG2S+ Memorial Garden project is ongoing, and one of many initiatives the school is undertaking to raise awareness. Marius Auer/Herald

The Nicola Valley Institute of Technology (NVIT) is focused on supporting the wellness of students and community members alike, as many continue to be affected by the ongoing Missing and Murdered Indigenous Women and Girls (MMIWG) crisis.

“NVIT has a number of items within our campus where we’re bringing awareness to MMIWG2S+ issues,” said Sue Sterling-Bur, vice president for students at NVIT’s Merritt campus.

The school’s most recent initiative is their new memorial garden, honouring all those impacted by MMIWG issues. According to the Assembly of First Nations, Indigenous women make up 16 percent of all female homicide victims and 11 percent of missing women, despite only making up 4.3 percent of the population.

With so many in the community feeling the weight of these issues, NVIT created the garden as a space of reflection.

“We created and built the MMIWG2S+ Memorial Garden here. It’s located in the central area of NVIT. It was to represent a coming of home for people who are within that missing and murdered category. We wanted a safe place for people who have family members in that category to go reflect, sit, listen, and remember their people.”

Students from NVIT’s carpentry class built the bright red structure at the centre of the memorial garden, representing the colour attributed to the MMIWG movement. The structure was built to represent a s7ístken, which is a traditional pithouse for the local Nlaka’pamux nations.

In addition to the s7ístken and benches already there, the school hopes to add solar-powered lighting and a water feature in collaboration with Conayt Friendship Society, who has supplied funding to the project.

“Water for Nlaka’pamux and Sylix territory representing healing. To add a water feature will add that other aspect of water and healing for families.”

“It’s also a space where we can host events. If a community is doing a walk they are more than welcome to come and end their walks here. Or they’re welcome to connect with our campus and book the site.”

In addition to the memorial garden, the school also recently commissioned a local carpenter to build a cabinet which now moves throughout the campus, housing a red dress adorned with paddles and the NVIT logo. This dressed is used to represent the presence of those missing and murdered during school ceremonies and events.

“Our Indigenization Committee and Elders Committee wanted to have a red dress inside the building to represent the missing and murdered ingidenous girls and women.”

Students at NVIT regularly receive communications regarding the institution’s sexual violence policy, highlighting the importance of adressing topics such as consent and sexual assault. The school also offers a plethora of mental health support for students who require it, maintaining a contract with Nicola Family Therapy. Sterling-Bur says educating the community and creating awareness are key.

“This is happening. Not only for Indigenous women and girls and two-spirited, but for young men and men within our territory. It’s quite prominent and very scary.”

Connecting with those who may be more vulnerable, such as individuals struggling with addiction and mental health issues, may help to reduce their risk of becoming a victim of the MMIWG crisis, says Sterling-Bur, adding that these groups aren’t exclusively targeted but have higher risk factors.

Those interested in more information about NVIT’s new memorial garden and other initiatives should call 250-378-3300, or visit their website at www.nvit.ca.