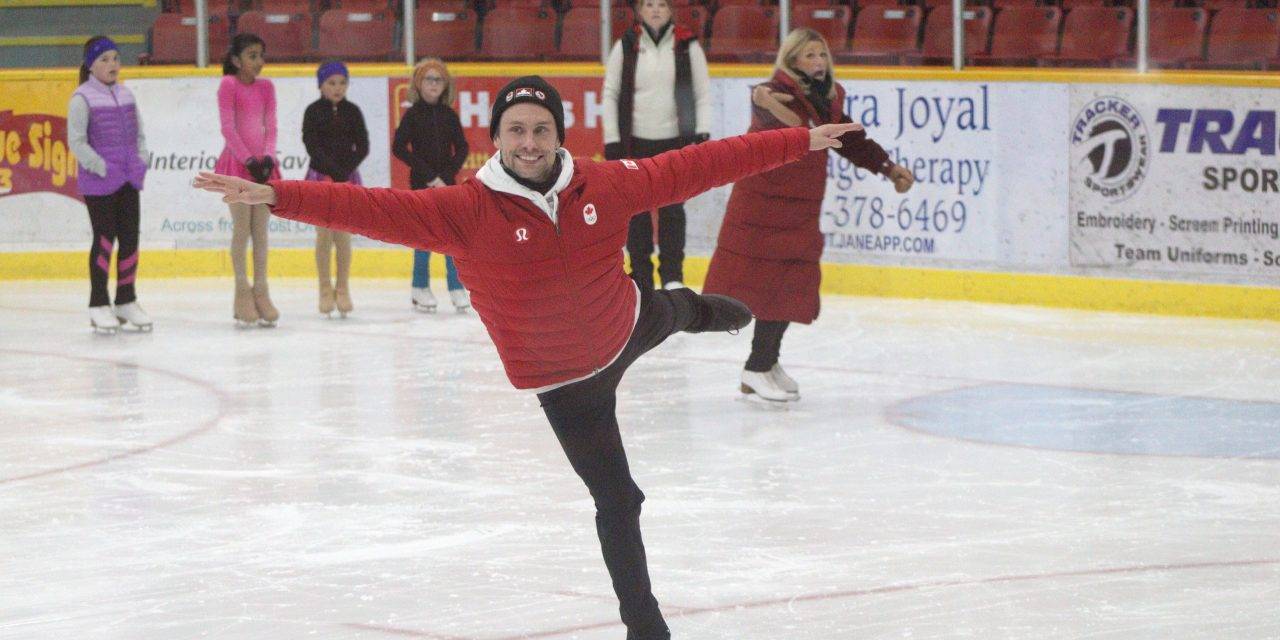 It is not too often that the Nicola Valley is visited by notable figures in the world of figure skating. However, olympic skaters, Kirsten Moore-Towers and Michael Marinaro ran their skating seminar for kids and coaches on Sunday, September 18. The seminar allowed skaters to receive instruction from competitors with experience as recent as the 2022 Winter Olympic Games.

Olympic level talent was on the ice at the Nicola Valley Memorial Arena this past weekend as Team Canada’s figure skating pair ran their skate seminar in collaboration with the Nicola Valley Skate Club. This clinic is part of a B.C. tour that Moore-Towers and Marinaro are on, teaching kids from the province techniques and tips that they have developed throughout their skating career.

“We reached out to the Nicola Valley Skate Club because we were going to be in the Vancouver area for the month of September,” Moore-Towers explained. “We wanted to coach in as many places in British Columbia as we could.”

The pair represented Canada in the 2022 Winter Olympic Games held in Beijing, China last February. The pair also represented the country in the 2018 games in PyeongChang, South Korea.

“We work very well together because we’ve been skating for so long,” she described. “We’ve taught together a lot in the past and we share the same vision and coaching techniques which led to us creating this seminar program that we’ve taken across Canada.”

Moore-Towers is from St Catherines, Ontario. Skating was in her blood as her mom was a skater as well. At the tender age of two, she was enrolled to skating lessons which eventually led to her future career.

“She (mom) told me that I really didn’t like it,” Moore-Towers explained. “I was screaming and crying but once I finished my six-week package of lessons, I had learned how to skate and was able to reap the benefits of what skating has to offer. I loved it by then and I never wanted to stop.”

Moore-Towers would go on to represent Canada in three Olympics, with the first one being Sochi 2014.

Similarly, her future partner, Marinaro, also started skating at the same age with his two older brothers but for a different purpose.

“They both learned how to skate and then transitioned into hockey,” he recalled. “I was expected to do the same but I fell in love with it (figure skating) as a two-year old and never looked back.”

The Sarnia, ON native, took inspiration from past skaters competing at the highest level.

“I remember watching Elvis Stojko compete at the Canadian Championships when I was nine years old and ever since that moment, I knew that this was something that I wanted to pursue.”

With the pool of talent shrinking as level of competition increases, Moore-Towers and Marinaro kept crossing paths as they progressed, eventually partnering up for their first Olympics in 2018.

“I think for that one, the qualification process was really the highlight for the both of us,” she recalled. “We were underdogs to qualify for those games and it was really hard for us to set ourselves up as a team that Canada could send for the Olympics.”

The pair finished in 11th in Pyeongchang but has since become favorites to represent Canada. They won three straight National Titles, leading up to their appearance in Beijing where they finished 10th in their pairs event and fourth in the team event.

“When we were finished with those Olympics we knew that our competitive careers were done,” Moore-Towers explained. “We’ve been competing for a long time and were ready to transition into the next phase of our lives as it pertains to figure skating.”

Before teaching kids in the Nicola Valley, the duo taught numerous skate clubs down at the coast, sharing their knowledge of the sport from years of competition.

“We love it,” she said. “We love to take what we’ve learned and share it with as many people as we can. This is the first time we’ve done it full-time without having our own training competing on the side.”

The figure skating seminar at the NVMA was open to Jr. Academy, Jr. STAR, and STARskaters, as well as coaches looking to add to their teaching repertoire.

“Such a surreal experience,” exclaimed NVSC Head Coach Diana Lorenz. “To learn technique and speak directly to an Olympian who has skated and competed with the best in the world, there is nothing like it.”

Lorenz added that the coaching and praises coming from these Olympians are a huge “confidence booster” to the kids in the seminar.

“We were all nervous getting out on the ice together,  but that quickly subsided and it was a fun & amazing experience for all who participated.”

After concluding their seminar in Merritt, Moore-Towers and Marinaro are headed to Mission for the next stop of their B.C. trip.