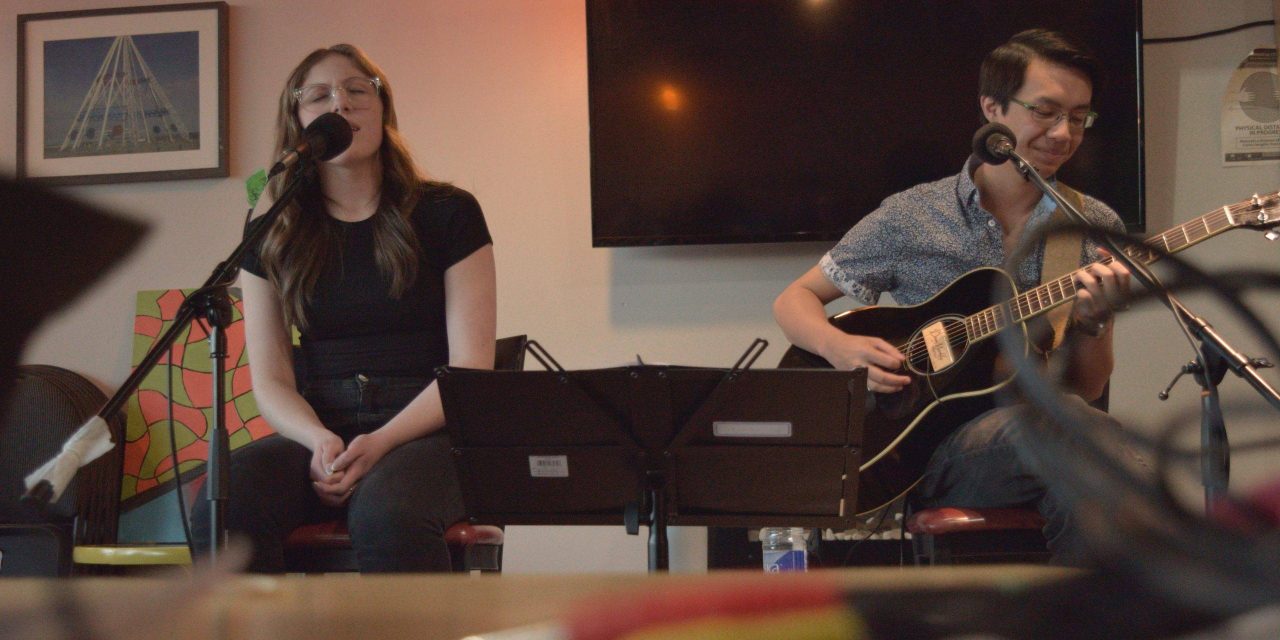 Steve Atlas and Nia Kuzio have been friends and collaborators since they met through the vocal jazz program in Merritt Secondary School. Izaiah Reyes/Herald

On Friday, May 27, the Nicola Valley Arts Council brought back the open mic night at Kekuli Cafe. Attendees were able to once again enjoy the treat of hearing musical performances from our very talented locals.

“It’s so good for us to have live music in the community,” said Jano Howarth, organizer of the open mic night.

“Music has been one of the last things to come back just because of the precautions we had to take due to COVID.”

“Being able to expose the community to our own talent in town and to promote them is always good,” Howarth added.

The Kekuli Cafe saw an impressive turnout for the reinstated event. Attendees first enjoyed performances from the Merritt Ukelele Circle followed up by
Willard Wallace and capped off by the Arts Council’s headlining feature, the duo of Steve Atlas and Nia Kuzio.

“It feels good to be a part of this event,” said Atlas. “It’s been three years since I played here.”

Kekuli was the very first venue where Atlas performed which made his return very sentimental.

“It was the first gig I’ve ever had and it was honestly life changing,” Atlas said. “If it weren’t for that first gig, I don’t think I would have ever pursued music.”

Atlas is a Merritt local who now lives in Vancouver. He is currently studying Jazz at Capilano University. Nia Kuzio, on the other hand, still lives in Merritt and is currently finishing her senior year at Merritt Secondary School.

“It’s super exciting to be able to sing with my friend Steve and I’m super grateful for the opportunity,” said Kuzio.

“I’ve only performed here twice, I did a song and I also danced so it has been a while for sure.”

The duo’s performance featured Chris Stapleton songs including ‘Traveller’ and ‘Tennessee Whiskey’ and ‘Starting Over.’ Later on they also played songs from John Mayer and the band, Fleetwood Mac.

The Arts Council plans on making open mic nights into a weekly basis. They are cautious with protocol and are planning to feature only selected acts for the first few events.

“I know people want to sign up but for at least a couple of more weeks we will be choosing the people who will perform,” Howarth explained.

“Hopefully after that we can work out how to handle the mics in terms of sanitary purposes. We are still figuring it out.”

The Arts Council is currently working on the next open mic night where they hope to feature Bobby Garcia as the headlining act. For up to date information on following shows visit the Nicola Valley Arts Council’s official Facebook Page.