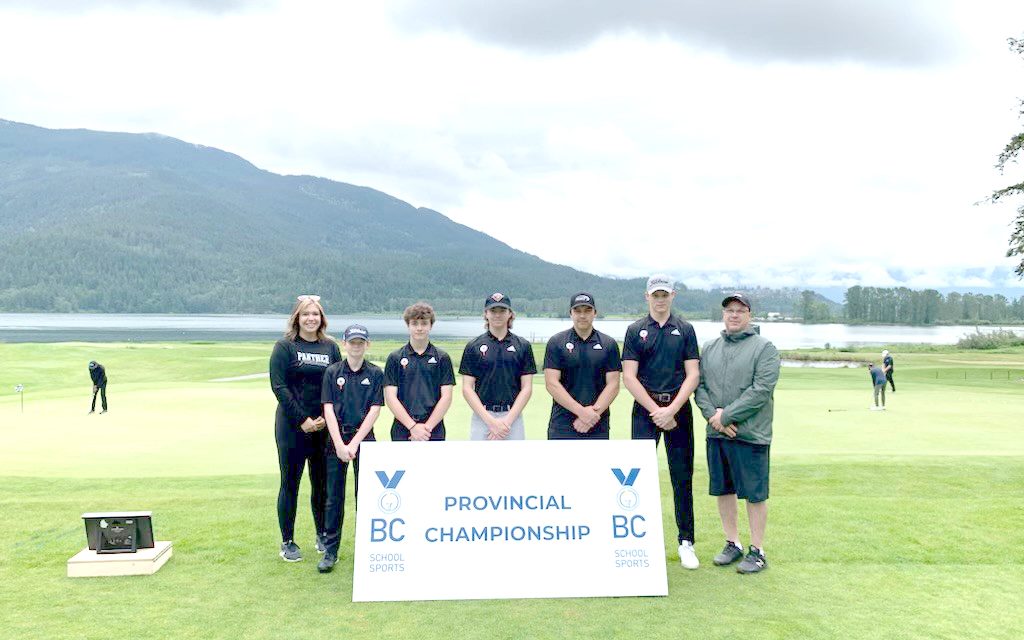 The Merritt Secondary School (MSS) Panthers golf team secured a convincing 14th place win at the provincial tournament this month, marking the end of an unprecedented season for both the team and the school as a whole.

Competing all over the province during their 2021 to 2022 season, the team and its players dominated the Okanagans tournament, becoming the West Zone ‘AA’ champions to secure their spot at the provincials, held this year at Harrison Mills’ Sandpiper Golf and Country Club. At the provincial level, the
Panthers played 2 rounds of 18 holes over two days, leaving them 14th place at the end of the competition.

“I think it was really important for all of the students to see that result, and especially for the golf team. We received the BC School Sports School of the Year award as well, so it’s great to have that buzz around the school now,” said Allyson Paxton, coach for the MSS golf team.

The MSS golf team is a lesser known team within the school, and the sport is lesser known in the BC School Sports program in general. Despite a year of pandemic restrictions, flooding, and fires, the team’s status has been elevated almost to the days of Roger Sloan, Merritt’s own PGA golfer who attended the school.

Despite a brief pandemic-induced hiatus from competing, the team has been hard at work practicing their game, with the Merritt Golf and Country Club allowing the use of their facilities for training purposes. This practice time has allowed them to compete at a much higher level, says Paxton.

“We haven’t seen competition in a long time because of COVID. It was really interesting to be there and see what the competition is like throughout the province. There are some really incredible players, and we were also playing against schools that were specifically golf academies, and a lot of places from the coast that people actually pay money to go to just to play golf in high school.”

At the provincial tournament, and throughout the school year, Paxton says she has been beyond impressed by the hard work and dedication for the sport that her student athletes show in their games. She added that she has great hope for the future of the MSS golf team, despite some big changes coming next year.

“What stood out to me was their perseverance. It was not an easy course and there were a lot of really incredible players, and for them to stick it out and to give it their very best was super important, and gave me a lot of hope for the future of the MSS golf team.”

With star players Jacob DeWitt, Cayden Bergstrom, and Cooper Harrington all graduating or moving on to other schools this coming year, Paxton says big changes will be coming, but she is working hard to make sure they will be positive.

Paxton hopes to involve parents of student athletes at MSS in competitions and practices more next school year, and looks to provide new opportunities to the young golfers that call Merritt Secondary School home.

“Next year I’m hoping for community support, trips to the driving range, and trying to get some more competition going too, so our students can be just a bit more competitive since we are from a small town. The support that we’ve got from everyone out at Merritt Golf and Country Club has been amazing.”