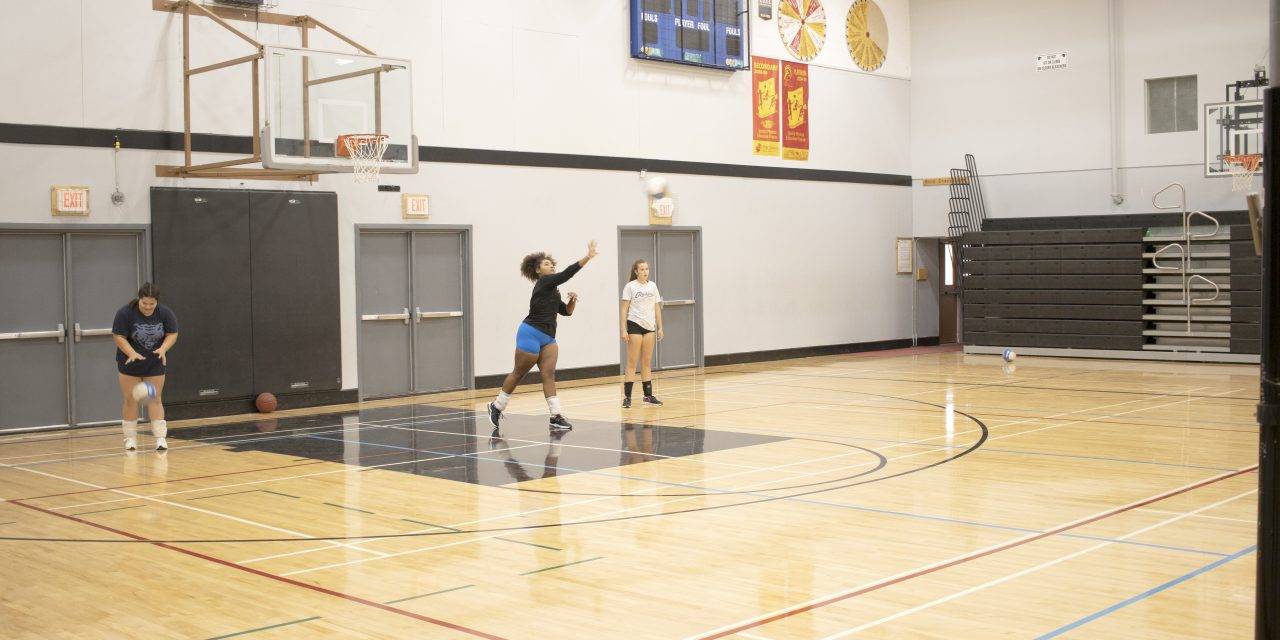 Merritt Secondary School began their semester on Tuesday, September 6, and while some students may take this day as an opportunity to relax, catch up with peers and teachers, girls hoping to make the Sr. Girls Volleyball team are already geared up for try outs that same day.
The Panthers Sr. Girls Volleyball team held their tryouts on September 6 and 7. Those who make the cut will go on to play for the team this season beginning with the upcoming ‘Air Attack’ volleyball tournament in Merritt on September 16 and 17.

“We are very excited,” said Vice Principal and Athletic Director, Gian Cavaliere. “This will be a fun sports year. We have lots of kids amped up to play sports this year and there’s not a lot of things more fun than sports in high school.”

Fourteen girls competed to secure a spot at 12-girl roster, with six being members of last year’s squad. They will be playing for second year head coach, Dave Finch.

“The girls that have come out mostly play volleyball,” said Finch. “I have players out there that play club ball in Kamloops and Kelowna so there are some elite players that are on this team. It’s a pretty competitive thing and two days are really all you need to figure out who the best 12 are going to be on the court and we just go on from there.”

The Panthers have a very busy season ahead of them. After hosting the big 16-team tournament, the team will be away for five tournaments, will play their regular season games, and then end the season by hosting the Provincial Championships at home.

“We’re very much looking forward to proving ourselves, ” Finch added. “We want to play a lot of volleyball so when it comes time for the provincials, we don’t want to be known as the team that got to there just because we were hosting, we want to earn it.”

The Sr. Girls Air Attack Volley Ball Tournament will take place from September 16 -17. There will be 16 teams, from across B.C., divided into 4 pools.

“We’re really excited that we’re starting to attract some areas of the province,” said Cavaliere. “We’re excited that Fernie’s coming from the Kootenays and we love that were going to have teams from both the Lower Mainland and Fraser Valley.”

Facilities in MSS, Nicola Valley Institute of Technology, and Coquihalla Middle School will be used simultaneously during the two day tournament. The top two teams in each pool will play in championship bracket on Saturday while bottom 2 will play in consolation bracket.
Cavaliere notes that this tournament is the next step of the school’s plan to reinvigorate the athletics program, making Merritt a viable destination for high school sporting events.

“The more we can continue to run these higher end tournaments with this amount of teams, then people will realize that we’re not that far away, they’ll realize that we can also run a very organized tournament attracting them to come here,” he explained.

“Some of the teams that will be here this year because they heard that last year’s tournaments were really well ran, really well organized, and overall, was just a really good time.”
Air Attack will serve as a precursor to the Provincials MSS will be hosting in December as they are both a 16 team tournament.

“It gives us a really good indication of how much responsibility and the amount of work it would take to run a really solid event,” Cavaliere explained.

“It allows us to test the facilities to make sure we can pull it off. It also gives us a rough estimate of the number of volunteers needed to run the event, as well as the funding required.”

The Panthers will play their first game of the tournament at the MSS gym on Friday, September 16, at 1 p.m.