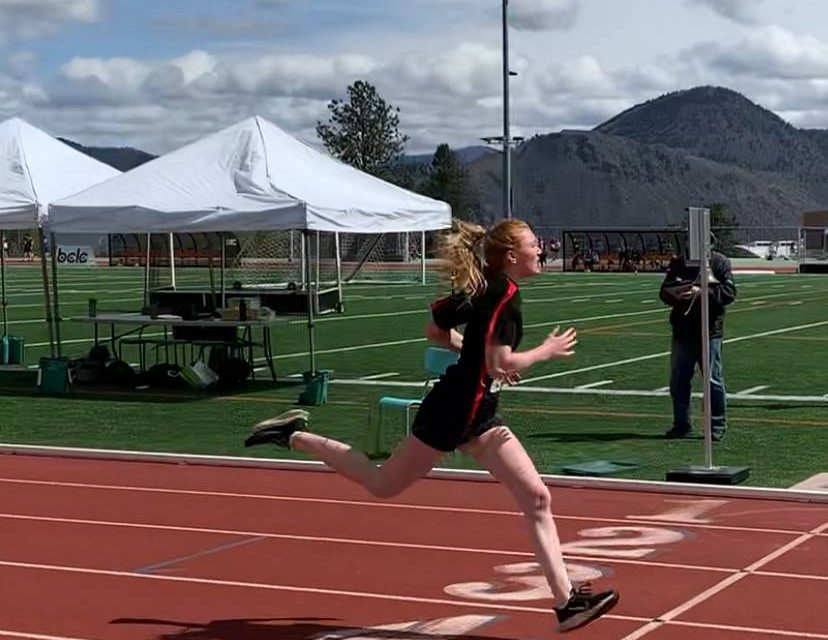 A proud moment for the MSS Panthers as track athlete, Michaela Nicholls has set the new 400m dash record time. The Panthers competed at the West Zone Track and Field Championships in Kamloops this past Wednesday, May 11. This meet determined which athletes will move on to the Okanagan Zone Championships.

Nicholls, with only finishing first in her mind, was surprised of the record-breaking results.

“I definitely didn’t think I would break the record,” said Nicholls “I was really surprised and my coach didn’t tell me until a little bit after.”

The grade 10 athlete impressively finished first in the 400m dash event with a record time of 1:05.04 beating Meaghan Kujat previously held record of 1:07.81.

“I thought I could have done better so when I go to Okanagan I hope to break my record again,” said Nicholls.

“I personally could have pushed more at the end but I was already in the lead and my main goal is to win.”

Nicholls, grade 10, said that this season is her first time back to track and field since elementary and her first time ever competing at the high school level.

“I’m really happy I did track this year because I was busy with work and other things,” Nicholls explained.

“My coach asked me if I was doing it this year and I’m glad that I said yes because i forgot how much I loved it.”

The damages caused by the November floods have impacted not only residential properties but also other places such as Voght Park where the Panthers used to train. Now, the Panthers have to travel to Kamloops to access a track which has become a disadvantage that this year’s team continue to overcome.

“I do walk and jog a lot but I haven’t actually practiced track in a long time,” said Nicholls. “I’ve only had two practices so, honestly, I was really nervous.”

Nicholls also finished first at the 200m dash event. She was very happy with all the feedback she has received from her performance at the meet.

“My parents were really proud of me and my coaches made me feel good about this, they were also super proud,” said Nicholls.

Nicholls, along with fellow athletes; Timothy Scholtens, Isabel Chemango, Kelsey Cleavely, Rae Bassett, and Sophia Thomson have recently competed in the Okanagan Zone Championships held at the Hillside Stadium in Kamloops on Thursday, May 19.