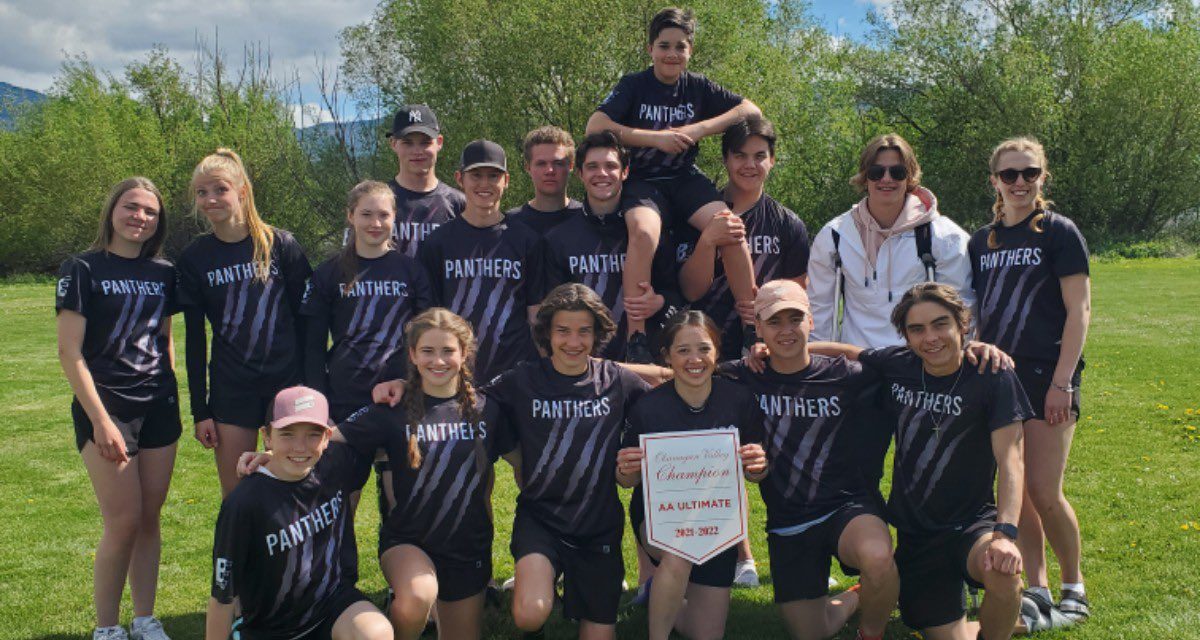 The MSS Panthers Ultimate Frisbee team poses after their defeat of Westsyde Secondary, clinching the top seed for the ‘AA’ category, and sending them to provincials. Photo/Taylor Larter

It’s one win after another for the Merritt Secondary School Panthers Ultimate Frisbee team, who were crowned AA Ultimate Champions at the Okanagan tournament, securing them a spot at the upcoming provincials.

On May 13, the Panthers ultimate frisbee team’s 18 co-ed and mixed grade players were in Kelowna to fight for their spot at the provincial tournament, ultimately beating Westsyde Secondary School from Kamloops by a score of 11-2 to secure the top spot in ‘AA’ ultimate.

Summerland Secondary School secured the second spot, meaning both schools will represent the ‘AA’ category at the provincial tournament.

Head Coach Taylor Larter, also a math and science teacher for MSS, says it’s been a challenge due to MSS playing as a ‘AA’ school, but often competing against those with the ‘AAA’ designation.

“We’ve always been pushed and challenged because we’re playing against these schools that are bigger than us,” said Larter.

This presented a challenge that the student athletes at MSS eventually overcame. Larter says the team soon began a winning streak, ultimately landing them a shot at becoming the 2022 provincial champions.

“They’re really just a fun group of kids. They’re ready and willing to learn, which is awesome,” added Larter.

“It is a co-ed sport, so we have to have a certain number of male and female players, and if we don’t have that, some of the tournaments we won’t be able to compete in. We want to make sure we garner that interest in frisbee and make sure we have the proper number of players.”

The team is practicing as regularly as a busy student’ year-end schedules will allow it, and looks to sharpen its skills on maneuvering the frisbee during play. The school added that it is focused on eliminating factors that could lead to injury or stress in student athletes.

Speaking of the win, Athletics Director and Vice-Principal for MSS, Gian Cavaliere, says the momentum is clearly there.

“It’s another step in a positive direction for our athletic program and how the power of the commitment of coaches, athletes and the community contributes to the importance of a healthy athletics program,” said Cavaliere.

“We started Ultimate three years ago and here we are today going to provincials. It’s wild and exciting!”

Moving forward, the team is focusing on preparations for their provincial tournament appearance, with the action taking place May 28 and 29 at Newtown Athletic Park in Surrey, which features designated ultimate frisbee fields.