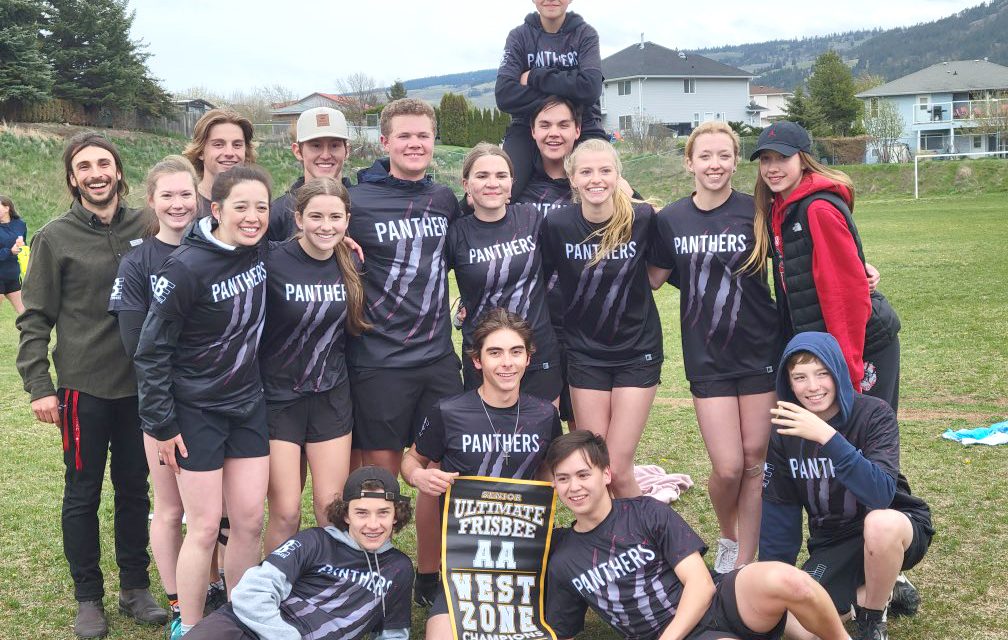 Merritt Secondary’s Panthers ultimate frisbee team were crowned West Zone champions, and will be the top seed out of the west at their next tournament. Photo/Shelly Moorhead

The Panthers’ co-ed team of ultimate frisbee players compete in the Okanagan league of BC Ultimate Frisbee, which is divided into four zones. The west zone will be represented at the Okanagan tournament in the second week of May by MSS and Westsyde Secondary, with the Panthers winning for top seed.

“We worked hard for this. It was a nice bonus, especially with sports starting back up again this year. This is the first major win the school’s had in a while now,” said Ryland Sheldon, grade 9 student at MSS and player for the Panthers ultimate frisbee team.

“Half our team right now is made up of seniors, so hopefully next year the sport will be more known and we can get more players. It’s a good experience,” added Sheldon.

MSS Athletics Director and Vice-Principal Gian Cavaliere says that the ultimate frisbee program, a relatively new offering by BC School Sports, has been well received and benefited students and the school alike.

“The kids have grown in so many ways. They’re playing club ultimate frisbee in the summer now. It’s a big deal for us. We do get a lot of success out of our teams, but not usually in newer programs,” said Cavaliere.

“Ultimate frisbee definitely caters to a different clientele of athletes, and it’s one of the few co-ed sports there are. There’s no referee, it’s very much a sportsmanship based game. The kids love it.”

The upcoming Okanagan tournament will see the Panthers go up against schools such as Kelowna, Penticton, Vernon, Osoyoos, and many others, only three of which will avoid elimination to move on to the provincial tournament in Surrey, May 28 and 29.

Recently, the Panthers claimed their place at the provincial tournament on Friday, May 13. Cavaliere says that the school is excited to continue providing new athletic opportunities to the community.