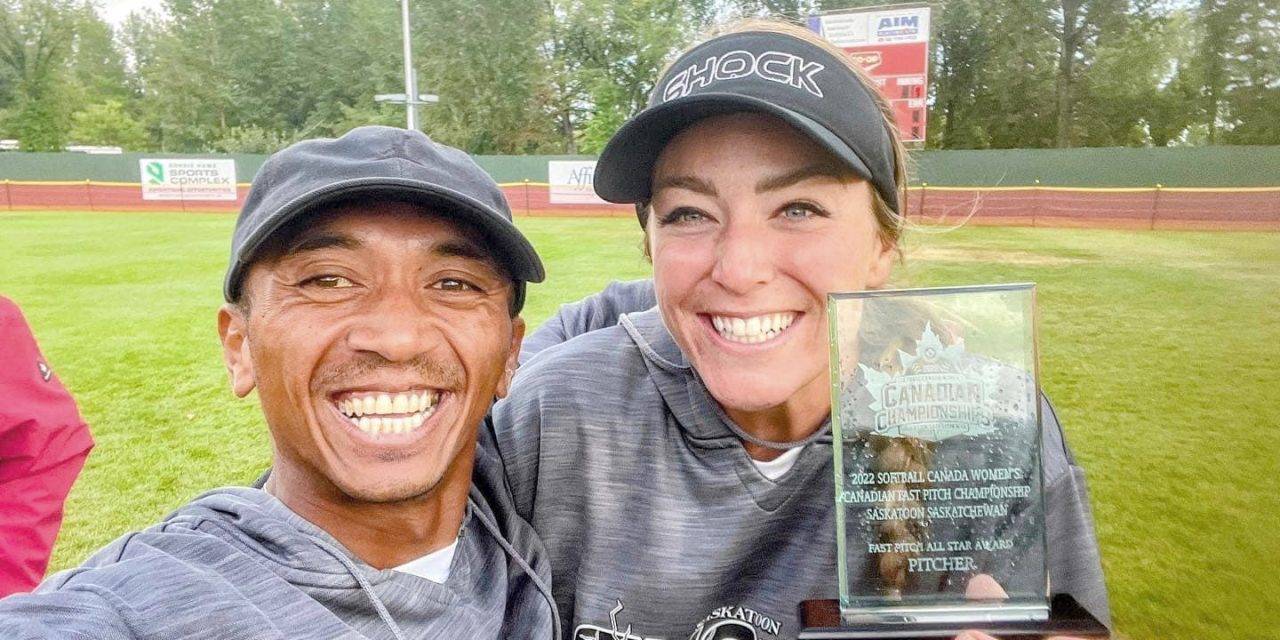 With a total of 34 strikeouts for the tournament, Alana Pooley is awarded ‘Top Pitcher’ for Softball Canada’s Womens Nationals. Photo/Alana Pooley

Merritt was well represented nationally this month as local, Alana Pooley, excelled at the 2022 Women’s Canadian Fastpitch Championship tournament. Pooley traveled to Saskatchewan, joining the Saskatoon Shock, as they competed for all the marbles from August 10 to 14.

Although she has been out of competition for the past three years, the seasoned veteran was able to string together impressive performances at the nationals, winning her the ‘Top Pitcher’ honours for the whole tournament. Her play now opens up new opportunities to both play and coach the game she loves the most.

Pooley was given the award, as a result of her play which helped the Shock place fifth for the whole tournament.

“That was extremely exciting for me,” she recalled. “It proves that I still got it and I’m so glad that I was given the opportunity to play.”

The team competed against seven other teams from across the country, winning their first four games of the tournament. Pooley noted that the fourth game went to extra innings where she pitched the first seven innings and had a whopping 16 strike outs.

“The last of those four games was probably the best game that I’ve ever played in,” Pooley explained. “Our team looked super strong and that made me super excited. I thought our team was the top team in the tournament.”

Pooley was a late addition to the team, being invited by her former coach Ryan Volk.
“Alana played wonderfully in this tournament,” said Volk. “Her mental approach is as rock solid as you could ever want a top pitcher to be. Never rattled, never flustered, she just throws her next pitch.”

Volk and Pooley have previously connected in Denmark where she played for the Barracudas, also earning herself a prior ‘Top Pitcher’ award. Volk, being a part of the coaching staff remembered her excellent play as he was looking for pitchers for the Shock.

“Seeing the performance that she gave us there, her mental toughness, and leadership, those are things our team desperately needed,” he said. “The players benefit from having someone with Alana’s level of experience.”

Pooley was invited after two pitchers on the team were declared unavailable for the tournament.
“One of the pitchers was injured and the other had gotten sick right before Nationals which left only one other pitcher and myself,” she explained. “In a big tournament like this we could have played 10 games which was way too many for just two pitchers to throw but it worked out in the end and we really worked well off of each other.”

Arriving days before her tournament, Pooley was able to watch the U15 national tournament where she saw players she had coached down in the coast play. This gave her a sense of determination to perform well.

“We headed down to the field and it was really cool to watch the young athletes I knew play,” she said. “They really got me in the right mindset, being both driven and super excited to start the tournament.”

After the tournament, Pooley went down to the field and started to do some pitching and batting drills with her coaches.

“I just really wanted to get my arm moving,” she explained. “Doing that really helped me settle in even before I met the team.”

Two days after arriving, Pooley met up with the team. The group was comprised of university level players, with ages ranging from 21 to 22 years old. Practice was very light to save energy for the tournament.

“They were all just really amazing girls, welcoming me onto the team,” she said. “I don’t think they really knew my ability until the games started and I was able to pitch. They were really excited to see my pitching ability and how I could help the team.”

Competition was very stiff at the National level. Pooley said that the tournament was an open category and players aged 18 and up were all welcomed to join.

“There were many great athletes in this competition and it was eye opening, even for myself, to see these women play, showcasing the ability that they have,” said Pooely.

“I would say that majority of these women are either playing or did play at a university level or for the national team which is amazing.”

Being inactive for three years at the highest level, Pooley was happy with how she performed but acknowledged that she could have played better if it weren’t for the layoff.

“Although I haven’t played for three years, I was definitely able to hit my spots and get my spins working which really benefited me,” she explained. “The catcher also knew a lot of the opposing players, what pitches they liked and the ones they find hard to hit. I was able to use this to my advantage, following my catcher’s lead, and it ended up working for me.”

Although winning their first four games, the Shock would end up short on the next four, landing them in the fifth spot.

“Our start exhausted us and we kind of lost our steam,” Pooley explained. “We executed everything really well however we lost the ability to string some hits and runs together which cost us.”

With a strong showing, Pooley gives praise to the Shock, saying that they have a bright future ahead of them, especially since the team was only formed two years ago. As for herself, garnering recognition from her play has opened new doors for the Merritonian.

As of now, Pooley is still looking to see if her existing schedule would allow her to take up the aforementioned offers. As she considers the opportunities, she continues to involve herself with her most beloved sport.

“I am excited to work with the pitchers of Merritt,” she said. “I am looking forward to getting some gym time over the winter and host some pitching clinics. Merritt’ s athletes, especially the younger generation, have huge potential and I’m very excited to be working with them to prepare for their next season.”

For anyone interested in getting pitching lessons, please email; westerhofalana@gmail.com.