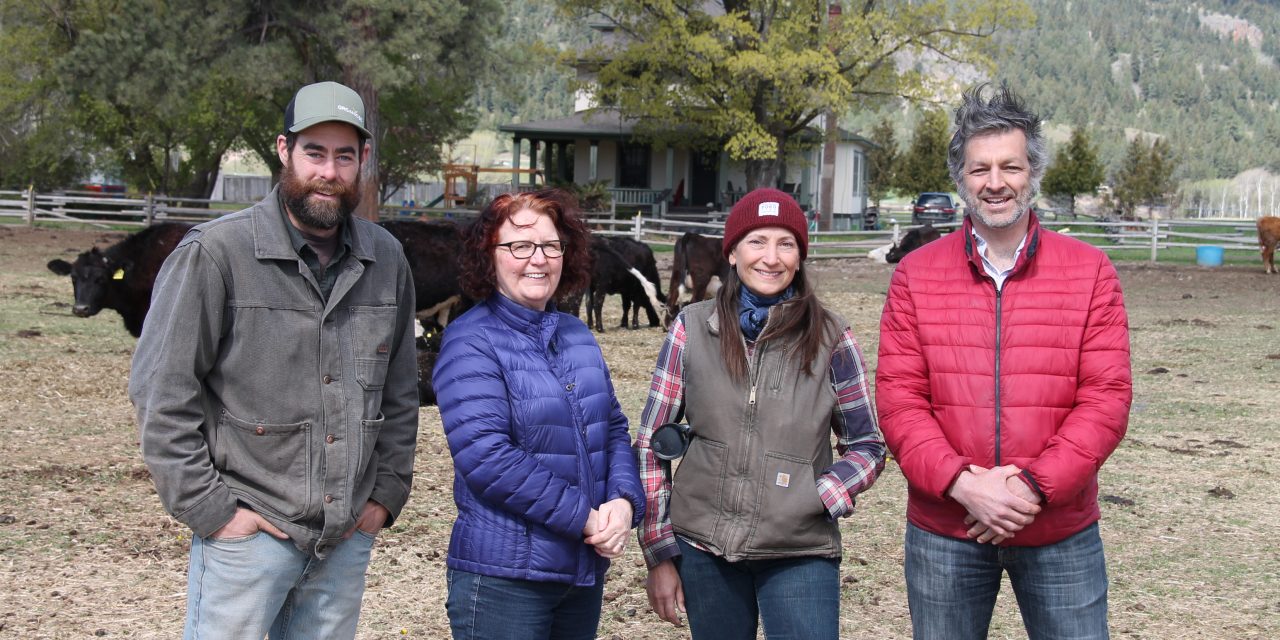 Representatives of the SSMPA, City of Merritt, and Province of BC met at the historic Collett Ranch in Collettville on May 13 to discuss the benefits of this new funding. Marius Auer/Herald

A series of rural development grants administered by the Province of BC will see the local Small Scale Meat Producers Association (SSMPA) receive $1 million to aid in the construction of a community abattoir.

The funding means a new facility in the Nicola Valley will provide meat processing and cut-and-wrap services to local farmers and ranchers, addressing a longstanding issue many local meat producers in the community face. SSMPA’s Executive Director Julia Smith says the funding comes along with a renewed sense of hope.

“We were on the verge of giving up. But now we are ready to press on, because this facility will allow us, and other local family farms and ranches, to grow and thrive while providing greater food security for the community,” said Smith, who also operates the local Blue Sky Ranch.

“My partner and I moved to the Nicola Valley in 2016 planning to expand our business to meet the growing demand for well-raised, local meat. But we soon found that the processors we relied upon were not able to keep up with our production and we had to scale the business back instead of growing it.”

The new abattoir will provide a full range of services to process red meats, and will be a government-inspected and licensed facility. The Province says the new funding will address local meat producers’ lack of processing capacity, as well as provide a plethora of economic benefits such as employment opportunities and increased potential for locals to profit.

Parliamentary Secretary for Rural and Regional Development, Rolly Russell, was in Merritt on May 13 to announce a new batch of funding from the Province’s ‘StrongerBC Economic Plan.

“People in Merritt have been through a lot in the past year, and they know how important business recovery is for community rebuilding,” said Russell.

“Merritt has demonstrated both grit and creativity in navigating their recovery, and I want to thank everyone in Merritt who continues to work so hard to rebuild a vibrant, resilient community.

BC’s Minister of Agriculture added that recent changes to the Province’s meat-licensing system, along with investments in community projects such as the new Nicola Valley abattoir, will make it easier to produce, buy, and sell BC meat in rural communities such as Merritt.

“This project represents significant job and economic opportunities for the region, while ensuring local ranches, abattoirs and businesses are part of a strong, resilient BC food system,” said Lana Popham, Minister of Agriculture and Food.

The funding comes along with two other high-dollar grants to other organizations in the Nicola Valley, including another $1 million going to Scw’exmx Tribal Council toward their ongoing ‘Gateway 286’ project, as well as $500,000 to the City of Merritt to support long-term economic recovery from November’s flooding.

“The agriculture community is part of our community,” said Mayor Linda Brown of the announcement, adding that the new Nicola Valley community abattoir will keep local meat producers from having to leave the community to process their meat, especially during inclement weather on highways.

“It’s absolutely essential that we keep them safe. Right now they’re driving all over just to get a couple cows slaughtered.”

For more information, or to learn more about the Small Scale Meat Producers Association, visit smallscalemeat.ca.