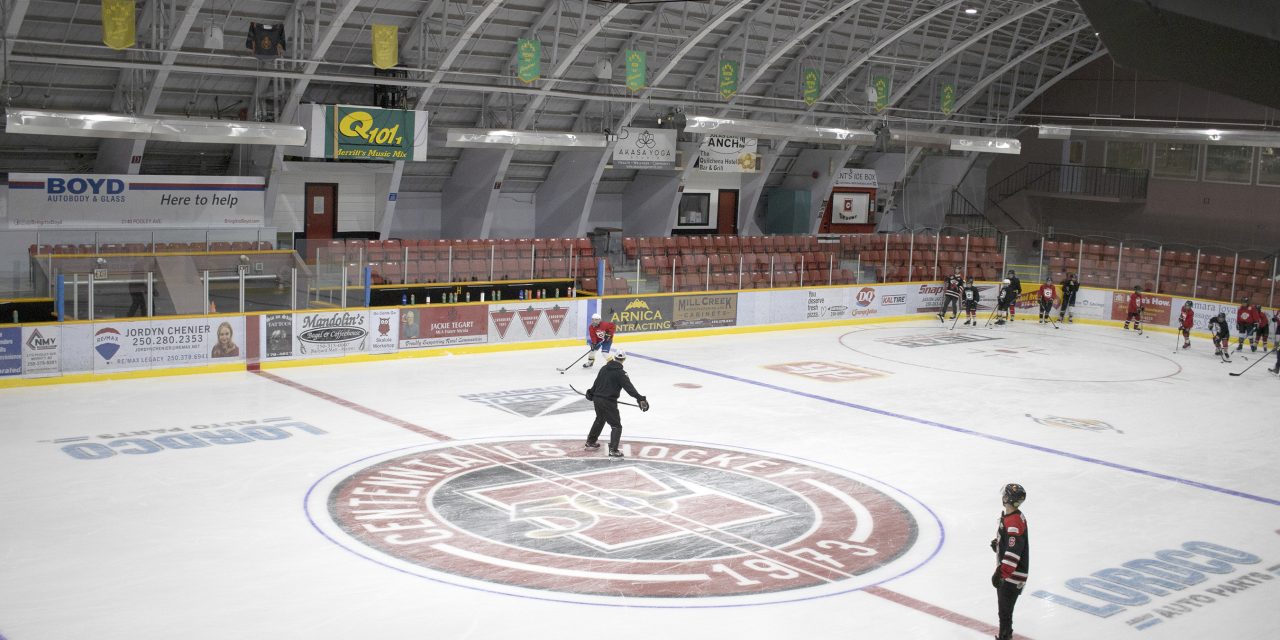 The Merritt Centennials have recently concluded their youth camp last week. The Cents’ ‘Hockey School’ was a four-day skills camp held at the Nicola Valley Memorial Arena from August 15 to August 18. Forty kids from both in and out of town, with some living as far as Edmonton, Alberta, have participated to learn hockey skills from one of BCHL’s longest standing teams.

“The camp went really well and the kids were working hard,” said Sam Waterfield, assistant coach of the Centennials. “There weren’t any issues with either of the groups we had and I think they had a lot of fun.”

Along with Waterfield, head coach Curtis Toneff, led the camp and they were assisted by some of the players in the Cents’ 22’-23’ roster:

“We have a good group of kids here in camp,” said Diego Johnson. “They’re pretty young but they are eager to learn and happy to be here. Everyone’s meeting new friends and kids who already were before camp are happy to see each other before school starts.”
Johnson is one of the new faces coming into the fold this upcoming season. The 16-year old is a Fort St. James Native who suited up for the Okanagan
Hockey Academy in Penticton prior to his commitment to the Merritt team.

“It’s good for the kids who are just beginning to get out and see everyone else doing drills,” he said. “After day one, everyone is already noticeably better. Everyone already knew the basics of skating so we taught them some more advanced techniques like getting on your outside edges and turning.”

Campers had the opportunity to work on different facets of their game. Waterfield mentioned that kids worked on power skating, puck handling, agility, passing and shooting techniques. The camp also featured dry land training that was done at Coquihalla Middle School.

“We had different levels of hockey players so the camp was all about getting them back on the ice, teaching them some new stuff, a little bit of skill development, having fun and playing games with them,” said Waterfied.

“We have a couple of kids who play locally and out of town. There’s only a couple of younger kids that are fairly new to skating and are just out here to learn and get a lot of ice time and reps in to become better players in the future.”

This upcoming season will mark the franchise’s 50th year in operation and the Cents have a busy month ahead of them starting with their main camp scrimmages on the weekend of September 2, at the Nicola Valley Memorial Arena.

To get latest information on the Centennials please visit their website, www.merrittcentennials.com.