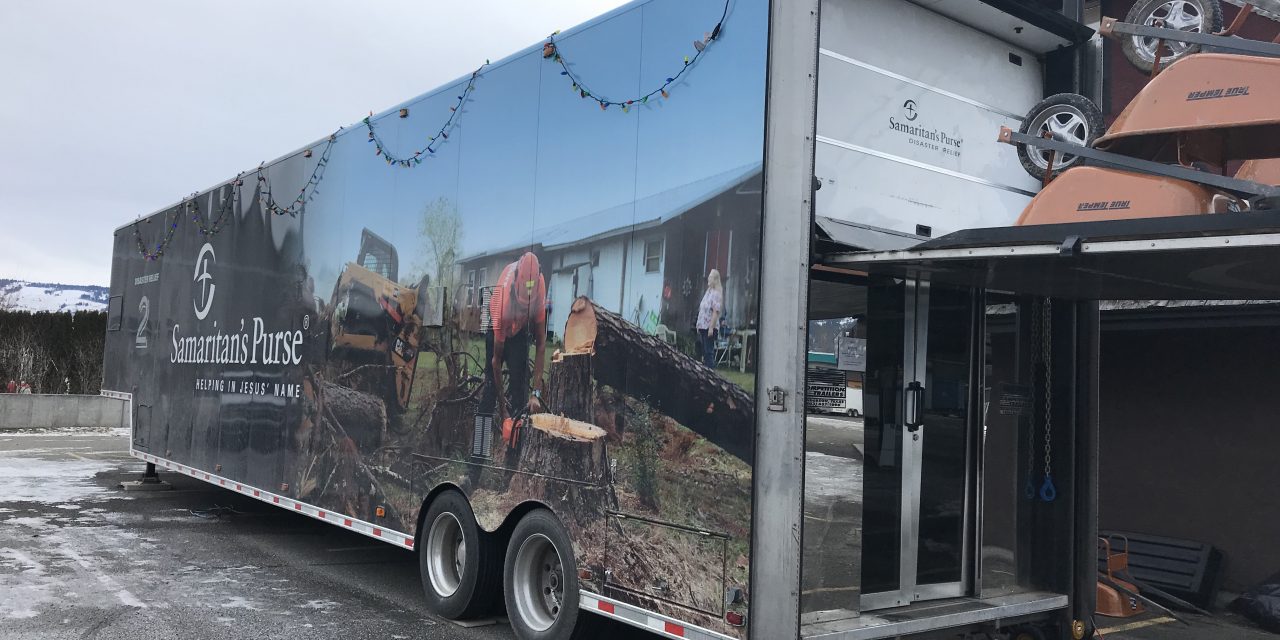 The Samaritan's Purse truck was parked alongside Crossroads Church in Merritt during the organization's stay. (Jake Courtepatte/Herald)

Samaritan’s Purse, a Christian non-profit organization focusing on humanitarian aid, has been in the community of Merritt since November’s flooding offering mostly volunteer administered cleanup and sanitization of flood affected properties. Now the organization is moving into recovery mode, the next step of their response plan.

“We kind of divide it into phases of a disaster, similar to what emergency management uses, including mitigation, preparedness, response, and recovery. It’s a circular approach. After response, which would be the phase of cleaning out and getting homes prepped for restoration and rebuild, recovery is a more long-term process,” said Steve Gross, National Recovery Manager for Samaritan’s Purse’s Canadian arm.

Merrittonians may remember seeing the Samaritan’s Purse parked alongside Crossroads Church on Voght Street during the organization’s stay in the community. Along with a plethora of sanitization and clean-up equipment, over 400 volunteers kept busy supporting up to 70 households during the initial “response” phase.

“Our involvement so far has been during the response phase. We were there doing some of the home clean outs, and some of the sanitizing work after. We’re always sure to sanitize after so that no mold or bacteria grow beyond the event once the home is cleaned out.”

Gross added that while the response phase mainly focuses on infrastructure, the recovery phase has begun and will concentrate resources on the people aspect of things. The organization works as a support system for those navigating the flood recovery process.

“We act as a bit of a convener of resources. We take an asset-based community development approach. So what assets does the homeowner have, what assets are in the community? Now, how do we help them access those resources in a timely fashion?”

Filling the gaps in service and resources in the community will build resiliency and increase preparedness and capacity for response, with the timing of services being key in delivering them effectively.

“We actually have two staff there right now, and the plan is to have them there for three years. It’s a long term process. Many people try to self recover and they think other people have it other than they do. Often it’s a year or 18 months down the road before they realize they just cannot go any further on their own. By then, most of the helping agencies have left town.”

Gross and the organization hope to build relationships with the locals over their three year recovery phase stay, and look to assure Merrittonians that no one is alone.

“We’re able to help people without judging any of the past decisions they’ve made or the decisions they’re making now. What I’ve learned over six years of doing this is that recovery is very much a process, not an event.”

Samaritan’s Purse case managers look to provide guidance and improve comprehension and awareness of one’s own assets, as well as those available to them. They are non-discriminatory, and will work with anyone in any flood-affected situation.

Gross has a more personal connection with the community, having been raised in Merritt. Leaving the community in 1981, other members of his family still remain residents. He praised the community for its resilience.

“Our intent is to work ourselves out of a job,” joked Gross. “We’re not looking at this as a long term engagement, but we want to make sure we leave some capacity behind, because that’s where resiliency comes from in major events.”

Those in need of Samaritan’s Purse services can contact one of their two case managers, via email at recovery@samaritan.ca, or in person at the Merrit Support Centre, 101B-1700 Garcia Street.